Why we're not really showbiz says Marty, the Wilde man of pop

Chris Goodman talks to one of Britain s most successful music outfits and finds it is truly a family affair.

Marty Wilde still dresses like a rocker, with a little Bruce Forsyth patented golf chic thrown in. The sideburns and shades attest to the pre-Beatles pioneer who had his first hit in 1958. Wilde transformed himself from ordinary Reg Smith into a brooding, authentic rocker in the American mould, 50 years ago this year. When stardom faded, however, the Wildes pulled together and built one of Britain's most successful family outfits.

In the Eighties, when daughter Kim went pop star supernova, Marty and eldest son Ricky were behind the hits, writing and producing. His manager and wife Joyce (an original member of one of Britain's longest running bands, the Vernons Girls) masterminded her daughter's ascent to the top. They were assumed to be pushing their daughter out on stage, just as they had supposedly done with Ricky, a brief teen star. Marty still bristles at the mention of the "British Osmonds".

"We're not a celebrity family, " he states with frustration, "We're not party people, we're family people." It was never meant to be a dynasty but there have been no Britney breakdowns, divorcing parents or drug hells. The Wildes stuck together and beat showbusiness at its own game.

Today, at a London hotel, Marty, Joyce and Kim are holding court. All live in Hertfordshire and Marty prefers golf to the big smoke these days. But the release of his new Best Of, including some of the best of proto-British rock 'n' roll in Bad Boy and Donna, has forced him to celebrate. Actually, Kim, still fresh faced at 46, forced him to.

"I'm pleased now, " Marty shrugs, "I'm 67, much more laid back. I work hard but it's really gigs and golf. It's a fantastic life but it makes you lazy."
Joyce adds: "I'm thrilled when he's on the road and out of the house. As his manager, I keep him busy." She had been in love with Marty ever since she witnessed him on fledgling pop television shows like Oh Boy! alongside Cliff Richard and Billy Fury. "A fortune teller told me that I'd marry a Marty Wilde when I was 15, " she nods, "I made it happen.

A couple of Vernons Girls lived in the same road as me in Huyton in Liverpool. I thought, 'Marty's on that show, so that's what I want to do'. I was a switchboard operator in the Liver Building, then I was doing Oh Boy! , meeting Cliff and everyone and I fell in love with Marty there and then - again - and he fell in love with me too."

Joyce bats away Marty's protestations with a potent look, "He told his manager that he fell in love with me the moment he saw me."
Joyce gratefully retired from the Vernons Girls once they married in 1959. Kim, then Ricky, arrived but marriage impacted on Marty's teen fame and their debts mounted to the equivalent of GBP 250,000 in today's terms.

"We had to pull out all the stops to pay it back, " sighs Marty. "In nightclubs, some of those were three shows a day, three hours each. He was being paid peanuts by people taking advantage of him, " Joyce says. "It got my back up. We were 21 with two kids and a mortgage. It was terrifying, so I had to go into management with Marty. I booked all the venues, made sure we were paid. I formed an agency when he was working so much I couldn't book him any more. I'd give them Joe Brown or the Searchers. Some nights I'd have 10 acts working for me. By the time Kim became a star I already knew how to work it, but I never intended it - needs must."

Kim always wanted to capture the energy she felt pass between her father and audiences as a child. Unfortunately, Ricky was less enamoured. Joyce had installed a home studio where Marty and Ricky started writing children's songs that inadvertently catapulted Ricky into the charts, a British Jimmy Osmond at 12. "People thought we were pushing our kids out, " Marty says. "It was never like that, ever. But Ricky should have remained quieter. He takes after his mother; likes the background. I should have stopped it."

Ricky later proved himself a production whiz and started making demos with his sister. He and Marty wrote Kids In America for her, a million-seller in 1981 that launched her career. Joyce managed Kim, booked tours and learnt how to set up a music publishing company so the family took the bulk of the income.

Unlike Joss Stone and Charlotte Church, Kim loved having her mother manage her. "It was great to have this army around you, " remembers Kim. "Being a pop star can be lonely. But nothing could get through, I felt invincible, we were a great team. I do Eighties nostalgia tours now and some of those artists are nowhere near as comfortable as I am now. I worked hard but some people work hard and don't get paid."

Joyce pushed Kim to ever greater heights, managing to book her in 1988 to support Michael Jackson on tour. Joyce looks triumphant: "Too right - and I got the merchandise rights. They all said, 'Don't be silly, you won't get that tour'. Oh really?"
"He was as curious as he is now really, " Kim adds of Jackson, "but he's from a big family too and I hope that gives him great strength."

Kim married Hal Fowler in 1996 and settled down like her mother had intended to do a generation previously. They have two children, Rose and Harry, and Kim famously evolved into a TV gardener - something else she credits to her mother's green fingers. Marty would not be caught dead with soil under his still manicured nails.

"I stopped making records when I was about 36, " she says. "It just wore me down, the pressure of having to be Kim Wilde. I wanted to opt out, have kids, put on weight and put Kim Wilde back in the box. It was a relief to get out for 10 years."
Last year Kim contributed to a single with German pop star Neneh. It was No 1 all over Europe and she has toured again, easing back into music.

She sings with Marty on his new album that also includes a duet with his 27-year-old daughter Roxanne who flirted with fame with her own band before becoming a songwriter. Youngest son Marty Jnr is a golf pro and is also now branching out into gardening, the other family business.

"I wasn't for them going into performing, " Marty says, "I don't care what they do as long as they try to be the best at it but there's a lot of casualties in showbusiness. I didn't want anyone in my family to be part of that, it's very bruising.

"A showbiz family is people who turn up at the opening of an envelope. You'll find us at home. We've never courted it. Our family has always treated showbusiness as a job, no more, no less." 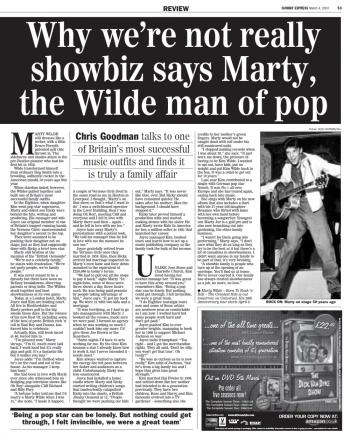