Summer in full flow and you haven't done your bit of travelling yet? The time is ripe – this week's festivals will take you to interesting places around the country.

The Benátská noc (Venetian Night) festival in Malá Skála, about 65 kilometres northeast of Prague, features Kim Wilde, described by Wikipedia as "an English pop singer, professional gardener and pop cultural figure". For the teenager of the communist era, she was a revelation, the more so that "Kids in America" obviously impressed someone at the public-service radio, becoming an instant hit. (I suspect the same music editor is still there, by the way.) The festival also presents Finnish latex monsters Lordi and their compatriots Waltari, Britain's The Vibrators and lots more. The organisers will put up a huge tent comprising a bar. If you tire of music, or want to listen from some distance, take a walk around the place – the Český ráj (Czech Paradise) area doesn't have to fight hard to earn its name. (25-27 July)

If you feel like travelling south, to an equally beautiful place, check out the international music festival in Český Krumlov. The Greek Night scheduled for Saturday promises Mediterranean music as well as Greek food and drinks. (26 July, 8:30pm) In Písek, southern Bohemia, you may want to stop for the Bohemian Bluegrass festival, featuring more than 20 bands from all over Europe. (25-27 July)

If you want your dose of Celtic music in Prague, you can have it at Vyšehradské keltování, a day-long festival featuring the 1st Czech Pipes and Drums, Slovakia's Irish Rose, or the Czech-Brittany folk music band Bran. (26 July, starting 12 noon) Other treats in Prague include Hungarian Gipsy band Parno Graszt at Rock Café (23 July, 7:30pm) and US bluesman David Evans at Blues Sklep. (25 July, 9pm)

Three premieres are scheduled for this week. The X-Files: I Want To Believe hits cinemas on Thursday, a day before the US premiere. No reviews are available for the time being. A short piece from imdb.com: "It is a stand-alone story in the tradition of some of the show's most acclaimed and beloved episodes, and takes the complicated relationship between Fox Mulder and Dana Scully in unexpected directions. Mulder continues his unshakable quest for the truth, and Scully, the passionate, ferociously intelligent physician, remains inextricably tied to Mulder's pursuits." A clear must-see.

Czech documentary movie René, introduced at the Karlovy Vary festival earlier this month, tells the story of a criminal followed by a movie camera since he was 17. The German animated crazy comedy Lissi and the Wild Emperor tells the story of a yeti interfering in the life of a monarchy. Derek Elley in Variety.com: "One of the German-speaking world's most beloved stories, that of the fairytale-like marriage between Bavaria's teenage Princess Elizabeth and Austria's Emperor Franz Joseph, gets a right royal sendup in Lissi and the Wild Emperor. Third feature (and first toon) by ace Teutonic spoofer Michael Bully Herbig lacks the sheer outrageousness of his sauerkraut Western pastiche Manitou's Shoe and camp Star Trek takeoff Dreamship Surprise: Period 1, but it compensates with a more level comic tone and some genuine charm." Too bad Czech cinemas offer the movie in Czech. "Ace Teutonic spoofer" sounds really promising. 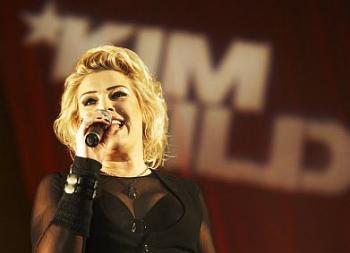