From Eighties pop star to green-fingered goddess, Kim Wilde has enjoyed nearly three decades of fame. Here, she explains how her life is blossoming...

It Is 1986 and Kim Wilde is at the height of her fame. Her song 'You Keep Me Hanging On' has topped the charts in America, is No. 2 in the UK and life revolves around tours, parties and performances.

Cut to 2008 where Kim, 47, juggles looking after her children Harry, 10 and Rose, eight, with gardening at her 16th-century home in Hertfordshire. Exhausted from years of a gruelling schedule touring and promoting, in 1996 Kim hung up her microphone and moved on to pastures new.

Deciding to take a break from the music industry wasn’t a snap decision for Kim. For the daughter of singer Marty Wilde, music is the family business with her brother Ricky co-writing Kim’s hit Kids In America and her mum Joyce acting as her manager.

"I remember thinking while I was on tour with Michael Jackson in 1988: 'He doesn't seem to be very happy and this seems to be a real circus. Is this the kind of life I want to aspire to?'", explains Kim.

Her life changed for ever when she accepted a role in the West End musical Tommy and met fellow cast member Hal Fowler, the man who would become her husband just six months later.

"I walked into the rehearsal room, saw him and knew I'd found my soulmate. We met in January 1996 and we were married in the September. It was a whirlwind affair really. We decided to try for a family straight away as we both felt very strongly about doing that," explains Kim.

Kim's transformation from pop star to horticulturist was initially motivated by her desire to create an outdoor space for her children.

"I hadn't thought about getting into another career, I simply just wanted to have some children and make a garden. As soon as I met Hal, we wanted to have children. I said: 'We had better start making a garden for them because I remember growing up with lovely gardens and I wanted the same for my children.'

"I wished my children to grow up where they could see vegetables growing, somewhere that would inspire them. I set about creating it with very little knowledge about what I was doing. I was advised to go to a local college called Capel Manor in Enfield. I went there for a short summer course when I was pregnant with my first child, Harry."

While many people would find the experience of going back to the classroom at 36 a daunting one, Kim relished the opportunity.

"It was fantastic to be learning again. At first the gardening course was a bit overwhelming but it was very stimulating. I felt challenging myself in that way was the best thing I could have done. There were lots of projects which had to be in on time and Latin names to get your head around. But I felt I had fallen in love all over again. I fell in love with music, then my husband, then with horticulture, before falling completely in love with my children," says Kim.

Kim won a gold medal for her Cumbrian Fellside garden at the 2005 Chelsea Flower Show but her greatest pleasure is watching Harry and Rose enjoying the garden she created. "Now I grow lots of vegetables and flowers for them and they get to run around in a garden full of butterflies just as I had imagined. They can see where potatoes and peas are coming from and pick them fresh. They are very aware and it's great fun sharing that knowledge with them. It's a perfect place to educate them as well as to stimulate them," explains Kim

Taking an organic approach, Kim looks after her plants and flowers without using pesticides. "I garden right outside my kitchen and we grow herbs in various pots and in the ground, everything from a mango pip on the window sill to peas and potatoes, strawberries, gooseberries and raspberries. Certainly in the vegetable garden there’s not a whiff of anything that’s not natural."

Kim's love of the great outdoors means she has an eco-friendly attitude, creating compost in the garden and sorting her rubbish for recycling.

"We have a big compost heap which I use as much as possible. We do lots of recycling and the children are very hands on. They understand the issues of the earth's resources being finite," says Kim.

Having a garden packed with home grown vegetables and fruit means she cooks wholesome, nutritious food for the family.

"I do a lot of cooking and we always eat together during the weekends. There's always fresh fruit and if I can't grow it I buy it organically. I tend to cook quite straightforward meals and use the produce we have in the simplest ways, using salad dressings to perk up peas or cooking them with fresh mint from the garden. One favourite is chicken cooked with home-grown rosemary," says Kim.

Practical and down to earth, Kim takes balanced view about her contribution to conserving the earth's resources.
"I am not so naive to think the small amount I do in my kitchen and with my garden is going to halt global warming. I haven't started using organic make-up or beauty products yet, but I do use very simple products because I don't like perfumes," she explains.

Music is still an important part of Kim's life and this summer, she will be performing across Europe at festivals and concerts. "There seems to be an audience that is glad to see I am able to stand up for any length of time in a pair of very high shoes and still be a mother and a gardener," says Kim, with a laugh.

For her, contentment has come through her family life rather than stardom and the limelight she once had.
"My aim was always to be in the place where I am now. I count my blessings and every day is a happy day," says Kim. 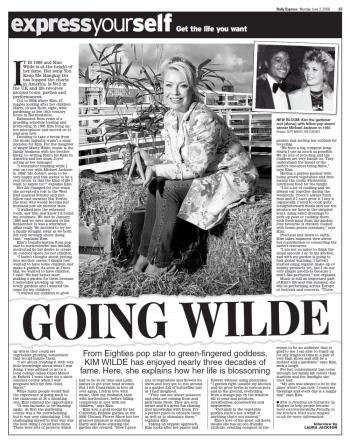