For decades, it has been known as the graveyard for many of our pop artists. But yesterday X Factor winner Leona Lewis yesterday became the first British female in over two decades to top the American charts, with her debut single Bleeding Love.
The former receptionist - who said it was her "dream" to crack the US - follows in the footsteps of Kim Wilde, who reached number one in The Billboard Hit 100 chart in 1987 with "You Keep Me Hangin On". Leona has taken America by storm in recent weeks.

Industry experts say her appearance on the hugely influential Oprah Winfrey and Jay Leno shows sparked a major increase in downloads and airplay, propelling her to number one despite stiff competition from American stars including Usher. Appearing on Oprah with her mentor Simon Cowell, she was given a standing ovation after an emotional performance of Bleeding Love, while the chatshow host told Hackney-born Leona: "You're the real-deal girl. Talk about a star is born!"

The notoriously modest 22-year-old said last night: "I really don't know what to say. I'm so overwhelmed right now. I'm getting to share my music with people around the world and it's beyond my wildest dreams. From the bottom of my heart, thank you all so much. It's because of you that I am able to do this. I called my family to share the news and my mum started crying. It was so sweet. They're coming to visit me in New York and were all going to celebrate because its also my birthday when I'm there. I'm still in LA at the moment so I'm going to make sure I find time to celebrate here too. Once again I can't thank everyone enough for this incredible support."
And Cowell added: "I am incredibly proud of Leona, what she has achieved in the past year is simply amazing."

Under his mentoring Leona swept to victory on ITV1's X Factor in 2006 after winning over the public with her extraordinary singing voice and sweet personality. In the days following her win her single, A Moment Like This, became the fastest selling British download and the fastest selling Christmas number one. Cowell immediately negotiated a £5 million record deal for her with American music mogul Clive Davis, who discovered Whitney Houston, and she flew off to America to record her album.
But she was soon attracting negative headlines after its launch was delayed when she contracted tonsillitis. Critics speculated that she had missed the opportunity to cash in on her X Factor success, and would sink without a trace, like others before her. However she proved them wrong with a triumphant return to the music scene last year.

Her first single from her album Spirit stormed to the top of the British charts and became the biggest-selling British single of 2007, and earlier this year she was nominated for four Brits. Despite her runaway success she has kept her feet firmly planted on the ground. She is still with childhood sweetheart, electrician Lou Al-Chamaa, whom she has know since she was 11, and owns a modest flat in Hackney.

Recently she said: "I don't drink alcohol, I've never done drugs and I'm not the type of person to come stumbling out of nightclubs. You never know what's true about celebrities, but I do know I'll be in trouble with my dad if I get up to anything like that. And I don't even do naked, half-naked or underwear shoots. All I want to do is my music and just hearing my single on the radio the other day brought a tear to my eye; I was so happy.' The American market is extremely lucrative but notoriously hard to crack, as British artists including Robbie Williams and Oasis, have discovered.

Just two female solo artists before Leona have gone to number one with their debut single. Petula Clark was the first in 1965 with Downtown, while Sheena Easton's Morning Train - released in the UK as 9 to 5 - followed in 1981.

Yesterday Kim Wilde, the last British female to reach number one, told Radio 5 live: "It's just fantastic for Leona. It's a great time for British female artists. I always like it when the women do well."
Remembering the day she discovered she was number one in America, Miss Wilde said: "It was incredible. I was pretty young. In my twenties. I'd just come from the dentist when I got the news. That's what I remember - my mouth hurting. And I didn't celebrate with champagne and clubbing. I think I had a cup of tea." 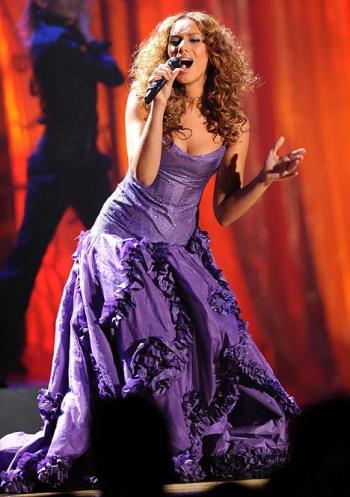