Born to be Kim Wilde

'Kids in America' turned Kim Wilde into an international star overnight. At the time the British woman was just 20 years old. Three decades later, Wilde has found the joy in music once again. She sounds happy, because she is happy.

There was a time when Wilde felt the music scene was just boring. Caught in the machinery of repetition, she decided to retire from the life in the spotlight and on stage. She married, had two children and delighted in the role of the passionate gardener, which led in England to her own TV show.

Then came Nena as a pop star of the Eighties. She asked Wilde to sing with her a remake of the hit 'Irgendwie, irgendwo, irgendwann' ('Anyplace, Anywhere, Anytime'). The song was a hit in 2003 and the British woman felt that pop music is still her life. At first she took a hesitant step back with the album 'Never Say Never' in 2006, now followed by the stronger sign of life, 'Come Out and Play'. Fresh, relaxed and lots of 80s sound and feel of her distinctive voice Wilde makes it clear: I'm back!

The optimism that radiates from her voice does not disappoint. Wilde has again taken a liking to the pop music and is trying to capture this special sound of the Eighties, without necessarily forgetting the now, as she explains in an interview with the Upper Austrian news. 'I wanted to capture the specific Kim Wilde sound and bring it up to date'.

That it works is not only because millions of record buyers at that time can not have been completely wrong. The fact that many pop musicians are rediscovering the sound of that time speaks for itself. 'It seems as if we, the stars of yesterday, still have much influence on the music. Therefore it was important for me to show that one can still come close to that sound some decades later.'

Kim Wilde arrived in 2010. Musically and especially as a person. This relaxed view of things she attributes to the process of aging.

Dear rock chick as a gardener

'We know how to rock and how to be a really good time', the British woman speaks for her band, which also includes brother Ricky. And ultimately it was so the audience was that it has encouraged in recent years to carry on.

The music business, which she had perceived as boring, has not changed in this respect. So she must have changed. Wilde says she has. 'When you get older, you learn to know yourself better. This clarity will help you with decisions. In addition, the age brings the advantage that it is much more concentrated on what you really want.' With age she has no problem. 'It suits me and so far I like it', she says. In November, she will be 50 years old and has no plans to let go this birthday go past quietly. She wants to celebrate in grand style. 'Some conceal this anniversary, I am really looking forward to it because it's a good reason to celebrate. I was very lucky in my life. For that I must be grateful.'

Her children - son Harry plays guitar on one of the new songs on guitar, daughter Rose is also musical, playing piano and singing - keep Kim Wilde young. Her children were not aware that they had a pop star as a mother in their first years of their lives. 'When I got married and gave birth to the children, I'd been so completely removed from the music business. When the children were in the age that they have understood what I do, I had taken a completely different career as a gardener. They hadn't seen me as Kim Wilde, the pop star, at all. '

One event the British woman remembers very well. 'My son Harry must have been about eight years old when he first saw a concert of mine. Then he came into the dressing room and looked at me with big eyes. I asked him: What did you think when you saw mom on stage? He looked at me and said: 'That was my other mom'.' Her daughter has apparently inherited the musical genes from her mother more obviously. 'She has looked at me in concert with big eyes and she thought it was great. She will probably go on a musical journey of her own one day.'

This trip has made Wilde a star around the world when she was younger. What would she say if one of her children would apply for a talent show? 'If they really want, then you can not stop them. I would not let me stop them even if there had been such shows in my time.' But Wilde then tells of her nightmare. 'In this dream, Rose comes to me and says she wants to X-Factor (the British version of 'The Super Talent'). I can not do anything to stop it, can do nothing against it, although I am against it. When Rose is treated dismissively by the jury in the show, I jump on stage and attack the jury members', she says and laughs. 'I think they'll lock me in, but before that I'm already awake.'

How does she generally value the constant search for talent, coupled with the promise to be superstar? Wilde: 'It has already been shown in England that a couple of talents such as Leona Lewis made their way. But how many broken hearts have been produced there, no one says. Moreover, the fixation on fame is strange. If someone has talent, he should be able to show it. But in the shows there is no focus on talent alone.'

For herself, Kim Wilde has found the joy of music without shows, because on 'Come Out and Play' companions like her brother Ricky, producer and songwriter, and Nik Kershaw, with whom she sings one of the new songs together, were there. She had a special feeling during the production. 'It was as if a child is at the candy store and gets everything she wants.' Because of this, she sounds so satisfied and happy.

With Nena she still has friendly contact. 'We're both family people, and we respect eachother. It has helped me find myself again and she gave me a hit. I will not forget her and I am grateful to her.' A comeback as a gardener of the nation is ruled out by her. But you never know, never say never, even if Kim Wilde says: 'No, that's over. I'd rather stay the rock chick.' 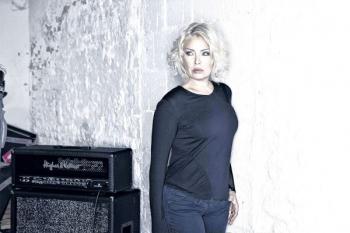