Imagine, you were Kim Wilde and are now Kim Fowler

The profession of a popstar is only partly about singing on cd's. A popstar has to be a fable creature, an idol, a fantasy image. A pop star is there to sparkle, to take off, it can also sometimes end op drugged in the curb - and taking out the garbage is something a popstar would never do.

Kim Wilde has taken out the garbage just this morning. She has made the children ready for school, and, great mother she is, she has even prepared bread for lunch. Now she stands in the open kitchen of her home, a converted barn, chopping peppers.

I brought her chocolate truffles, of Dallmayr in Munich, in the short term but considered not to deliver them, after all, Kim is a friend of Nena, and for Nena chocolate is the brown shroud of Europe. Kim Wilde does not look as underfed as her German counterpart. Kim Wilde is like the sister of Kim Wilde, who has not made it to the stage, but the country, where she is happy with her husband and children.

Now this woman, this warm, soft, good woman, who was once one of the most enigmatic pop stars of the Eighties, bites into a chocolate truffle. With 'Kids in America', 'Cambodia' and 'Keep Me Hanging On' she made the good mood all over the world, Madonna chose her for her inspiration, she appeared with David Bowie and Michael Jackson on stages, and the girls in the discos all tried to look like Wilde (except the wacky one, who wanted to look like Boy George).

And despite all the popstardom she has managed to be happy, to have children, and their relationship to chocolate truffles is not disrupted. Nena and she would think very differently. 'Nena thinks', says Kim, 'that it is a violent act against nature, to cut a carrot.' And she puts the blade into a bell pepper.

From the Pop Kim evolved a Happy Kim. And so it could stay until the end of their days. So why did Happy Kim move back into the pop business after twelve years of relative silence? Does she want to live a little like Madonna? 'Why would I want to? Because I want nothing more than to send my children to school with bodyguards? No thanks, not really. It is not good for children to grow up in the glare of paparazzi.'

Kim Wilde one day made a conscious decision not to be Kim Wilde anymore. 'You know the feeling when one is left at a party and realizes they should have gone two hours ago? So I felt with my career. ' But Happy Kim, then from where comes the pleasure to start a comeback? She says she'd become more herself over the past few years, but then comes the 'but', to explain it all. 'But within me still beats the heart of the live performer who would like to express themselves.'

Unlike the Popkim of earlier years Happy Kim of these days is no more into the hype, fame and fleeting crap. Popkim celebrated proper parties, Popkim has made crazy videos - that was Popkims life. Happy Kim doesn't want to go back to those times, she just wants to go back on stage. 'I want to tell stories with music.' And there are quite a few to tell. She married the musical singer Hal Fowler, has two children and moved to this barn in Hertfordshire in the wider area of London. A huge cozy barn with an artfully overgrown and award-winning garden in which there is a tree house that is not there for the children. 'It was my childhood dream to own a treehouse.'

In this barn Pipi Longstocking would gladly spend her twilight years, so it's not for interior designers. An open fire, a thousand pictures on the wall, children's drawings, wedding photographs, colorful pillows everywhere, a poster of the Billboard charts, from when she was number one in the U.S.

The chart list was a gift from her brother, but Happy Kim couldn't care less about trophies these days. 'I thought that was a fascinating moment to be number one, but I do not really kid you when I say: The day of my wedding was more beautiful and more important than such a placement in the charts.'

Kim Wilde has obviously not ceased to be Kim Wilde, she has sometimes made projects such as the duet with Nena a few years ago, she had her own show, she was one of the most popular garden-stylists of the kingdom. She has not missed being a popstar. She went to the bakery as Mrs. Fowler, which she is called since her marriage. 'I was more the familiar garden artist with her own radio show for the neighbors' - and now some are shocked that she suddenly begins to sing. 'People always think you can only make one career, be good in one discipline. That is so boring.'

Did Mrs. Fowler never missed Kim Wilde? 'Rubbish, I haven't missed anything, no show, no interviews, no make-up... Although, it is not right. My goodness, the make-up I have really missed much.' Excuse me!? Ironically, the makeup did you miss? 'No, but these make-up artists. I love to be styled. That was wonderful. But then I had to constantly fly from place to place, dancing on huge high heels, constantly watch my weight. I haven't missed all that, believe me, for a second.'

Life has gone by beautifully. More beautiful than that of one of her major partners, Michael Jackson, who she believes constitutes the most extreme example, how dangerous it is to lose ground beneath your feet. Jackson had been broken starting with his childhood. There had been no one around him, who would have loved enough, to tell him: Stop it! Kim Wilde himself had always had a reserve. 'There were these attempts to try and tell me I couldn't do anything anymore without a bodyguard,' she says. 'Always this big hoopla: Kim is here! I had my mother as a corrective. She then said: kindly bring your laundry in the laundry room, I'm not your butler.' And then of course the man, the family. 'This pressure to always have to be a superstar was making me unhappy in the long run, so finally I left it,' she says. 'But I have never had the impression 'now everything is going downhill'. When I met my husband, I knew that the happiest times of my life had begun. So why did I have to have the impression that it would go downhill?'

The most wonderful story about her double life as Kim, the Wild one and Mama Fowler goes like this: 'My son was about three years old, and I was just about to suck the carpet, so not a particularly glamorous pop star activity, and suddenly came on television, an old clip from me, and he saw me in a much younger, sharper version, however, immediately recognized me, pointed at the screen and exclaimed, quite surprised, Mummy!' Nevertheless, Mummy Fowler says, she succeeded for a long time in keeping the public out of the family life. Now it would be difficult, especially because the daughter does a lot on the Internet and found Youtube. For the 10-year-old Rose, Mama is since the 'coolest person in the world.' Only two years older son Harry Tristan finds Mama 'unfortunately, a bit embarrassing.'

But it's not so bad that he wouldn't play a guitar solo on the new record, which comes out in late August. And how does 'Come Out And Play' sound, then? Now, close your eyes, march past the 80s, so clear that we think we hear Ronald Reagan: 'Mr. Gorbachev, open this gate.'

And since we're imagining anyway: Imagine you were Kim Wilde. Then you must also think of you, now to be Kimberley Fowler, the Happy Kim living with family in a barn. Kimberly Fowler has the voice of that time still. But she has a rival: the young Kim Wilde, the myth, the dancing is still in the mind. 'Of this competition I am not afraid,' says Kim Wilde. 'For I know to her well, her strengths and her weaknesses.'

She smiles and offers me a chocolate truffle. 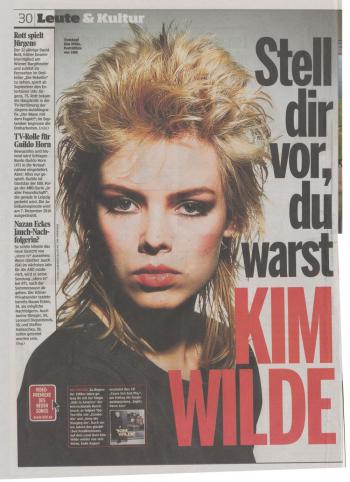 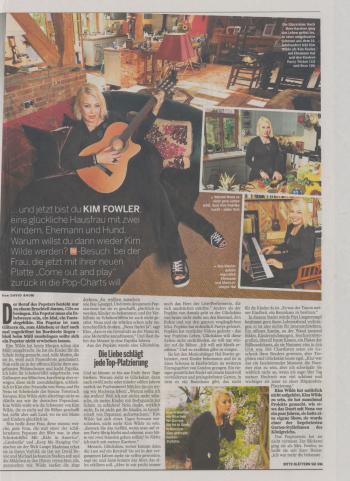