She was never the pronounced "gay diva" like her colleagues Madonna or Kylie Minogue, who had started in the same decade, and yet hits like "Kids in America", "You Came" or "You Keep Me Hangin On" are part of the personal life soundtrack of many gay men and lesbians like to be in their "best years". After many years of self-chosen retreat, Nena brought the British back into the spotlight in spring 2003 with the bilingual duet "Anyplace Anywhere Anytime". On November 18, Kim Wilde will be 50 years old, has a new album "Come Out and Play" and will go on a tour of Germany again next spring. Torsten Bless spoke to the pop veteran.

In an interview you said that you had outgrown the status of "pop star", now you are a "rock chick", isn't that a little brave for a woman almost 50 years old?
(laughs) I don't think there is an age limit for a rock chick. I like the idea of ​​being one at 70. Maybe there's some wishful thinking, but I think I've honestly earned the title over the past five years thanks to a lot of live performances with a great band. I wanted the new songs to have the energy of hits like "Kids in America" ​​without being too retro. There are currently many bands that take the retro sound and make it their own, Muse, Kasabian or the Scissor Sisters for example. I don't see why I can't do that too.

One of the songs, "I Want What I Want", says "People tell their stories of what their life is not, wasted years and broken dreams they never gave a shot". What is behind it for you?
This song is meant to encourage everyone to make their lives as fantastic, as ambitious, as beautiful as they really want to take the moment to make the best of the situation and not be afraid to plunge into the unknown . I've met some people who have regretted not doing certain things at certain times in their lives.

How are you doing, do you regret anything in your own life?
There were times when I almost threw the chunks off. For example, in 1988 I was offered to go on tour with Michael Jackson. My first instinct back then was to say no, I'm just Kim Wilde, how could I be on the same stage as the King of Pop. But there was a lot of encouragement from my surroundings, my parents, my brother and others helped me to believe in myself. From time to time you have to do that for each other, you can't always be strong on your own, you can also benefit from the energy of those around you who love you.

You started at 20, then your career went uphill, wasn't that a little bit sometimes?
There were times when everything seemed really unbearable to me. The first single was a huge hit straight away. I was just in my twenties, my private life was like cabbage and beets, as it can be at this age, but I had to get out and be strong, look great. I understood that that was part of the deal, thought it was a reasonable price to pay to follow my dream. After 15 years I was so fed up with pop business and myself that I thought it was high time to do everyone and especially myself a favor and get out. Then I met my future husband, we started a family and my life changed dramatically.

Was horticulture, which then led you to a successful second career as a BBC presenter, a kind of therapy for you?
For sure at first, and then it became a real passion, it replaced music. The music is fantastic, but it also completely occupies you, if you love it, there is nothing else. But when I left the business, I made an emotional decision to push this part of me completely aside, I had given the music my best years. For me there is only everything or nothing. Gardening is just as beautiful, just as creative, just as fulfilling, it took a lot of the old pressure off me, that was very liberating and gave me the right, relaxed mood to raise happy children.

In the past ten years, the importance of the Internet has increased immensely, as has the image distributed in the media, see Lady Gaga. When you return, do you feel particularly under pressure to have to comply with this?
Well, I felt very pressured, especially in the eighties. And I also think that image has always been important in pop; For example, Elvis Presley would never have been so successful if he hadn't circled his hips like this, had such a stunning profile and such beautiful lips. Sometimes I feel a little intimidated by this pressure, but not as much as in the past. Now everyone knows that I am a mother, that I am almost 50 and have been with it for a long time. I couldn't keep up with any norms of physical perfection. The pressure that a woman my age carries around is enough for me. You can turn 50 and look like this, or turn 50 and look like 35 or 40, I prefer to be in the second camp, but I speak more as a woman and not as a pop star.

You said ten years ago that much of the music of the eighties was still influenced by the punk of the late seventies, as a deliberate distinction from the conservative head of government Margret Thatcher ...
That's right, Thatcher was a very strong personality that provoked resistance. But the politicians who came after her also abandoned our country. It's still very easy to get upset about what they did and, above all, what they didn't. But you can consciously spend a lot of time on this anger, or you can become aware that you cannot change many things.

Despite the rather conservative climate, the eighties produced many gay musicians, Boy George or Andy Bell from Erasure, for example, some with very offensive lyrics such as Frankie goes to Hollywood or Jimmy Somerville with Bronski Beat and the Communards. How did you experience your colleagues back then?
I thought all of these artists were great, many of them had a great way of talking about their sexuality, it went hand in hand with a great sense of humor. They were clever enough to make some people look pretty stupid with their prejudices. And they made great records that said it all. However, I didn't really think about it at the time because I was never one of those people who care about the sexual orientation of their fellow human beings. 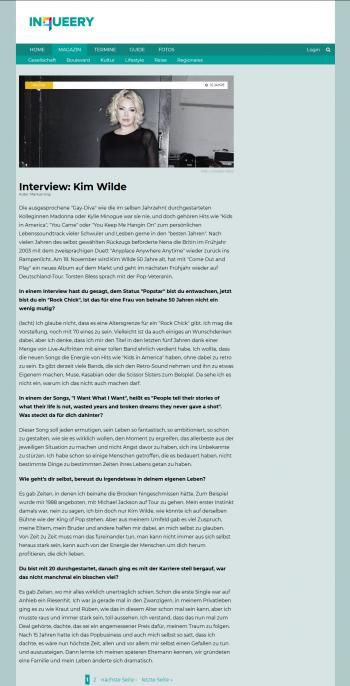