Pop music and gardening may seem a million miles apart - but Kim Wilde has cultivated success in both fields.

After swapping showbiz for a new career in horticulture a decade ago, the 80s icon returns to the stage on July 17 for the first of this summer’s English Heritage picnic concerts at Audley End. As the eldest daughter of rock ’n’ roll legend Marty Wilde, that she should follow him into the family business was never in doubt, and in 1981 her debut single, the New Wave classic Kids in America, reached number two in the UK charts.

"Music was always the focus of our household," she said. "At the time we all thought it would be my brother as he left school at the earliest opportunity to join my Dad’s band, but I was secretly nursing my pop passion too."

During her pop career, Kim released 10 albums and more than 30 singles, selling more than 7 million and 12 million respectively worldwide.

Her cover of The Supremes’ You Keep Me Hanging On reached number one in the American Billboard charts, she supported Michael Jackson on his 1988 Bad world tour and she starred in Tommy in the West End, where she met her husband Hal Fowler.

After they were married and she fell pregnant with their son Harry, Kim chose to step away from the limelight.

A love of the outdoors as a youngster growing up in rural Hertfordshire, and the desire to create a beautiful open space for her own children, led her to pursue gardening.

"We moved from south east London to Hertfordshire when I was little and it had a huge impact on me," she said. "We went from having this horrible little garden with ropey roses and a rotten old apple tree to this wonderful house with woodland, flowers and wildlife. I vowed that if I was ever in a position to grow my own veg and create gardens I would embrace it."

Like a well-tended flower bed, her gardening career blossomed, resulting in magazine columns, book deals and TV shows. However, her love for music continued to be an itch that needed scratching and in 2001 she was invited to tour with the Human League.

"At the time I thought I’d grab the money and run but it was really successful and that gig led to another and another and another," she said. "It resurrected my music career and I decided to go with it. I’d had a long break from music and I felt ready to dip my toe back in."

The resurgence for all things 80s reignited Kim’s passion for pop and she has relished getting a second bite at the cherry. On July 17, she will be sharing the stage with Rick Astley, Howard Jones and T’Pau.

She said. "Life was a lot less complicated back then and I think that’s how people remember the 80s. It’s easy to forget about the bad bits and remember all the cool bands and fashion. The music has stood the test of time. It takes people back to their youth and a happy time."

Now signed to a German label, Kim has spent the past six months recording a new album and is looking forward to its release later this year. With a rock/pop feel and "majestic, anthemic choruses", Come Out and Play features collaborations with Heaven 17 and Nick Kershaw.

It has also been a family affair, with her brother Ricky producing some tracks and her son Harry performing a guitar solo.

Being back in the limelight has also meant Kim can put her fame to good use. She is a supporter of Much Hadham teenager Stacey Johnson’s charity Kisses4Kids, helping officially open her summerhouse at Princess Alexandra Hospital last year.

"What Stacey has achieved is incredibly humbling," she said. "When someone is so ill and their first thought is only to make life better for others is inspirational. If I can shine a light on what she is doing then I will. It’s the one useful thing about being famous."

And if she had to choose between being a popstar or a celebrity gardener? "It’s too close to call," she said. "I just did a musical festival in Vienna with Billy Idol and the first thing I did when I got back was water my tomato plants. For me, gardening and my life as a performer strike a very good balance." 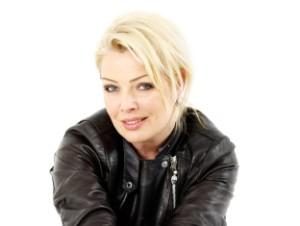