The style of Kim Wilde: Flashback

Bring out the posters, audio tapes and peroxide, Kim Wilde is back, twenty-nine years after her first success.

Peroxide hair, smoky eyes, pout, perched on zippered boots with high heels and molded in ultra tight jeans. No, this is not the decryption of the fashion for winter 2010, but rather that of spring 1981. The silhouette is that of Kim Wilde. In a single, "Kids in America", the young English woman became the icon of the early Eighties at once, quickly labelled 'Brigitte Bardot of pop'. Barely away from her mother's skirts, the singer is a wise little girl, far from the image that the media are cleverly trying to build.

Because for the Wildes, only music counts. And everything is done within the family. Dad Marty Wilde - himself an old glory of the British rock
sixties - makes hits tailor-made for his daughter that her brother, Ricky, produces ably. As for mum Joyce, she assumes the role of the allegorical manager. Surrounded by her family, the girl seems ready to face the horrors of showbiz.
Catapulted to the front of the London new wave scene alongside Boy George, Duran Duran at the age when other are still playing ball, Kim did not much of a decadent one. Poor target for the English tabloids, these are soon to punish her for not offer them scandal by describing her as a girl without talent. Derided very earlier in her country, but adopted by the French, Germans and the Swiss, Kim has one hit after another across Europe.

After her the flood

In the ruthless realm of pop, competition rages. Like a hurricane Madonna sweeps everything up in her path. And Australia's Kylie Minogue
gradually appropriates the title princess of pop in the heart of the English. In this climate, Kim's flame flickers. Her success fades and she puts an
end to her musical career in 1998, shortly after the publication of some unflattering photos of her in an English tabloid. Relieved, she starts a family with her husband, Hal Fowler, and devotes to her family, cloistered in her farmhouse in the county of Hertfordshire, far from the sirens of hysteria in London. Between two bottles for her children, Harry Tristan and Rose Elizabeth Kim finally hangs up her pop star costume. At least that's what she thinks. She swapped her microphone for shears and began the horticulture. As her face is still television friendly, she becomes the star of a show on gardening on the BBC.
But drive out the natural, it returns in a gallop, don't they say? In 2003, Nena, the unforgettable interpreter of German '99 Luftballons', offers a duet to Kim Wilde. This is the jackpot. 'Anyplace, Anywhere, Anytime' resets the former glories of the eighties. Kim was made clear the obvious: music, her whole life. All dressed in leather, she hit the road and keep gardening as a hobby. After a timid comeback in 2006, the singer returns today with 'Come Out and Play' and offers the luxury of competing with Lady Gaga in the upper echelons of the charts. All this after almost thirty year career! The ideal time for her many old fans to dive in sweet nostalgia and to have another turn towards the Wilde.

Her heroes
Michael Jackson
In 1988, the singer opens the European concerts of the deceased star. About him, she says: 'He is the most adorable and shy person that I ever encountered'.

Her friend
Nena
In the 1980s, Kim and Nena crossed paths in TV shows. Today the German singer is a grandmother and Kim will blow out 50 candles on November 18, 2010, but they both still love singing.

Her fan
Laurent Voulzy
In 1985, Laurent Voulzy kills his sleepless nights playing pinball on the picture of the rock star. When he finally falls asleep, she
whispers in his ear: "Lawrence, it is time to sleep now. Take off your glasses ... "

Her tools
The shears and the microphone
Between tours, Kim puts her stage clothes away and recharges her batteries gardening around her English farm.

Her cute sin
Toblerone
The Swiss have always had a soft spot for Kim Wilde. As for her, she complains her greedy addiction to our Toblerone!

If the Fifties forever shine in the glare of Marilyn Monroe, the 1970s are still defined by the sex appeal of Debbie Harry of Blondie, the 1980s began their kitsch and pop crusade under the leadership of Kim Wilde. A pioneer, she has launched the mullet cut (high on top, long in the neck) in 1981, the same one as the Valais and footballers cherish so much.

Rouge
What? Rouge no. 1
Brand? Yves Saint Laurent
How much? 47 francs

Bolero
What? Black kashmir bolero
Where? www.stylebop.com
How much? 220 francs

Pumps
What? Giselle Lace Black Court
Where? www.topshop.com
How much? 90 francs

Baby Kim
At the time, Kim bought second hand clothes and cut her hair herself.

New wave Kim
"Especially do not smile! " Rebellious attitude requires Kim to still display the same sulky pout she had during her infancy.

Wild Kim
In 1990, the competition is fierce and Kim puts on her underwear and fringed bolero to stay in the race. 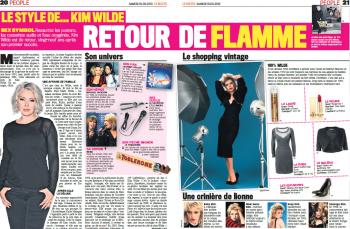