Singer and gardener Kim Wilde has created a truly magical country garden with its own timeless, informal feel.

'To me this garden is perfect', says Kim Wilde, who started gardening in earnest in 1996 after buying and converting her Hertfordshire barn. 'It has settled into exactly the place I hoped it would be', she says, looking out over the lush, cottage-garden style area. 'I like a garden that's not been trained to within an inch of its life. We bought this place for the magnificent barn and didn't know much about gardening then, so things such as aspect meant little to me. In fact, it's great - the garden gets sun all day', she says.

There are three acres in total with one acre planned and planted close to the rear of the barn. The other two acres include a wild flower meadow and a wood in the making. 'We threw ourselves into it with very little knowledge. I was hyperactive when I was pregnant for the first time and the garden became a priority. All my energy went into making i!'

Kim admits to being well and truly hooked by all of the garden programmes that were on television at that time and was determined to make a space perfect for children - and also a place to grow her own fruit and vegetables. She is adamant that gardening wasn't the simple option for her, as some people might have thought, when she stepped back from her music career at that point. 'Theres certainly nothing retiring about gardening and being a mum', she says.

Kim took two garden courses at nearby Capel Manor and these have led to a brilliant use of the space. Formal plantings at the front of the barn use clipped box, topiary and nepeta but the main design is focused at the rear. As you step out from the back of the barn's interior, there's a brick-paved area with a pergala twined with lilac and pink wisteria. In bloom in late spring, it then creates shade on hot summer days. A vine-covered dining area gives the cool feel of a Mediterranean terrace. From here, there are views down a gentle slope and across famland. Kim has used gravel on areas that are not bricked or paved, so there's no fiddly grass to mow, and has divided the area into separate smaller 'gardens' - she describes it as a 'bento box' effect. 'I like things to look beautiful. Give me a vegetable that looks better than another and I'll grow it', she says. 'It must be the show business side of me'.

A wide path lined with box balls and standard amelanchiers ends in an arch to frame the view. A curving perennial bed is planted with clumps of ornamental grasses, such as stipas, and herbaceous perennials including echinops, eryngium, echinacea, mecleaya and knautia, which flourish in late summer onwards. Kim loves statement plants, such as the huge, silvery Scotch thistles or some rather special cardoons bought from Christopher Lloyd's garden. Roses are a big favourite and thrive in the heavy soil. 'They are so tough, it doesn't matter what you do to them, hack them to death or not, they still just want to be beautiful', she says.

The garden is filled with places to sit, although Kim says its rare that she and husband Hal ever do so. The couple entertain a lot and, Kim says, their guests are usually the beneficiaries of the hard work. 'They can spend all afternoon enjoying the flowers, bees and butterflies and - just occasionally - we can do that. Then it's really worth the work and you know why you made it all come about'.

One of the most interesting parts of the garden is where the wild fllower meadow joins a more formal area divided by espaliered apple trees. There are a series of raised wooden beds where Kim grows vegetables and herbs, with loungers and seating among them for enjoying the edible abundance. Also in view is the meadow with its orchard trees, slate sculptures, living willow arbour and native flowers, from early narcissi and cowslips to ex-eye daisies and achillea. At the other side of the garden, raised beds are filled with foliage plants, such as phormiums and paulownia, with Verbena bonariensis and kniphofias for colour. En route to this part of the garden is an elegant weeping elm, which Kim says looks fabulous at every stage of the year from its neat, black winter buds, through leaf burst to the final trailing ribbons of neatly overlapping foliage.

Throughout the garden, Kim has created detail and variety, but without the mistake of making it look overly fussy. 'I love cottage garden style. It can often be thought of as old fashioned but I prefer a garden that's not too manicured. I appreciate cutting-edge design and enjoy it immensely - but I'm more at home with a few flowers appearing where you wouldn't think someone had planted them. I'm not a control freak - I like the garden to breath and be itself a little, just as I like my dog or the kids to be a bit naughty sometimes.'

With great plans this year for new music ventures, all things horticultural may have to take a temporary back seat. But the garden is so important to her and her family that she will always find time for it, no matter how busy. She loves the physical side of working outdoors, although she acknowledges it takes a lot of energy. 'It can be exhausting, negotiating a compost heap at any time. It's always hard work, no matter what anyone makes it look like on TV', she says. 'There's nothing easy about gardening, but it's such a wonderufl thing to do and really healthy.' For Kim, gardening is the grounding, calming part of her life - the important contrast to a show-business world - and one sh would never dream of letting go.

Owners: Kim and Hal Fowler and children Harry (12) and Rose (10) and Jess, the Airedale terrier.
House: A 17th-century converted barn with black wooden cladding and a mellow tiled roof
Features: Garden created from scratch since the mid-1990s, with an acre of landscaped areas inluding raised vegetable beds, specimen trees, roses and climbers. Trained apples and pears, a wood and a wild flower meadow with orchard trees. 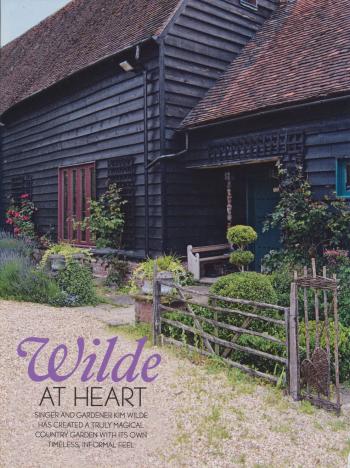 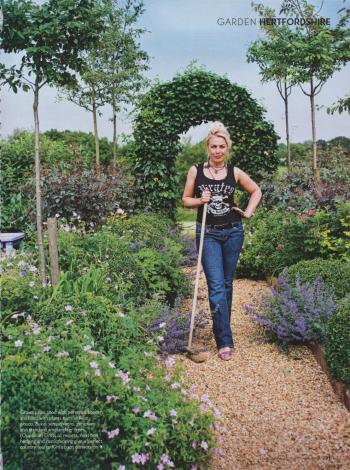 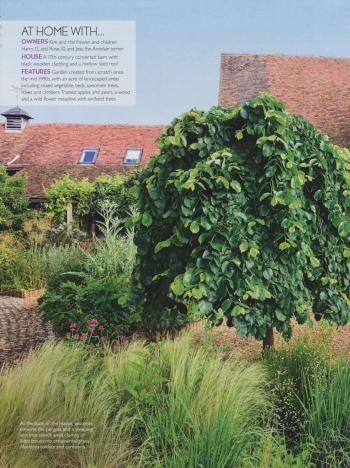 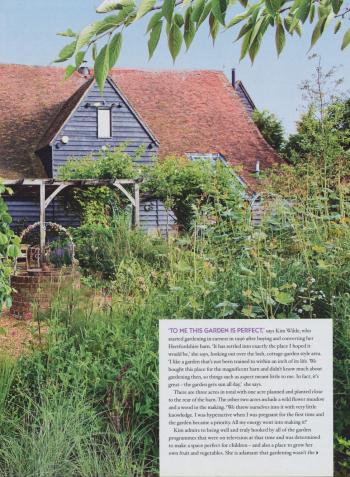 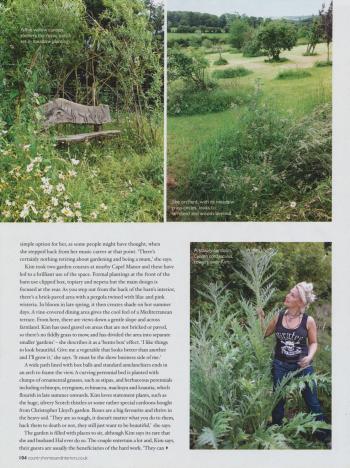 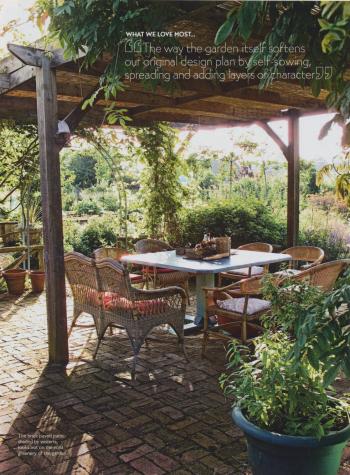 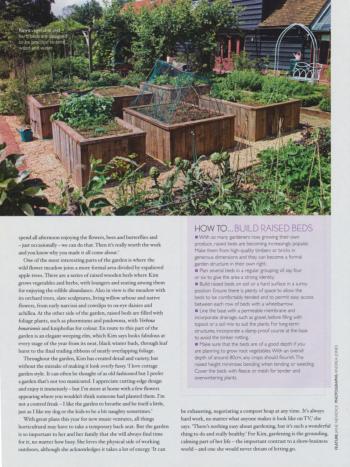 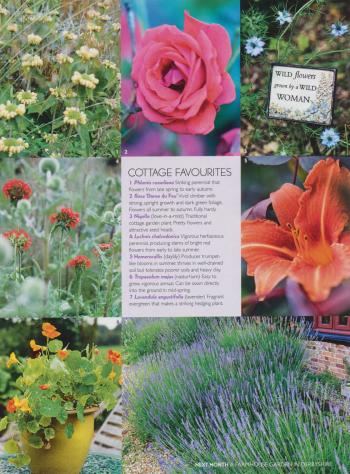