Kim Wilde has lived in the rural idyll as a housewife and celeb-gardener since her retirement from the music. Now she is back on the scene. Politiken had lunch with Kim Wilde, who had actually retired herself. Kim Wilde likes food. She opens her eyes wide and exclaims a sincere 'oh, lovely', when the fish cakes I have ordered for her arrives. I have promised a typically Scandinavian menu. She's thrilled, but doesn’t eat the rye
bread.

A little practice in Denmark

Wilde is in Denmark to highlight that it is 30 years ago, she gave her first concert ever. Her record label had such low expectations for the then 20-year-old girl of pop that they sent her to a small country to the north to practice. Apparently Kim Wilde was good for music videos and charts, but could she sing in real life? Thus it happened that one of the biggest names in British 80’s pop gave her first concert in Antvorskov hallen in the town Slagelse.

A lot of pop music has since gpne over the counter. 15 million albums and 50 million singles sold. She has been gone for almost ten years, but
has now returned. I ask her why she disappeared when we have eaten a few bites of our afternoon late lunch on a day when she is in Denmark to do five interviews before she flies back home to England with easyJet.

"I remember exactly when it was, I would not be pop star anymore. I was at a nightclub in London, where all pop stars came then. I went to the lead singer Siobhan from Shakespears’s Sister. Do you remember their smash hit 'Stay'?", she asks. I nod. I remember clearly the hit of 1992, one of those songs that were played anywhere and anytime. "I hated the song! Still, I caught myself from going up to her and say, "Really well
done with your song. I think it is fantastic and so are you. " Afterwards I sat down with a glass of champagne and thought, I'm about to develop into a nightmare! Like the kind of people I hated, "remembers Kim Wilde. "I decided that my life was going in a different direction. I would not be such a type that was in her 30s and snorted cocaine in nightclubs and patting people on the back. I suddenly felt a violent need to distance myself from all that. And then I moved to the country".

On a voluntary pension

Kim Wilde bought an old barn in Hertfordshire, located about an hour north of London. She pulled the plug out of the old life with parties and guests and started putting the house in order. After a number of 'interesting', but completely wrong boyfriends she met actor Hal Fowler as the two played together in the musical 'Tommy' in 1996. They were soon married and moved in together in the rural idyll. "I retired myself as a pop star when I was 36. Before that I had a great career, but I began to have a hard time in the industry. I could feel that my audience only bothered to hear the old Kim Wilde songs, while I was proud of the new things I was doing," she says, referring to the r'n'b-influenced album 'Now and Forever 'of 1995, which flopped. "At the same time, I knew immediately that I wanted to have children with my husband. And I knew that children and pop hits was not a good combination. I have always had in mind that if I were to start a family, then there would be something to be dropped. And so it was... my figure ' Kim Wilde jokes and laughs hoarsely from deep down in the stomach.

She says that her decision to leave the music industry was a huge relief. It was a relief no longer to slave around to get her music played. No longer having to worry about critical reviewers and bad publicity and constant search for the next big hit. Instead, she got a great deal of peace. A peace which she had not experienced before in her adult life that was spent on venues, nightclubs in the spotlight and on MTV.
"I was very determined to be Mrs. Fowler. I even changed the name of my checkbook and my passport. It was important to me. Suddenly I could be completely different. I felt like one of those people who have committed a terrible crime and then suddenly one day got given a new identity and a new life. I was anonymous, "she says with a big smile.

Took control of her life

Kim Wilde lacked neither fame, the makeup, the 80’s curled hair, high heels or the noise. She had stopped the carousel, and instead she started building a nest. "When I was pregnant, it was the most amazing experience. I just let go. And loved to be big and fat. I ate everything and was fat and got my child and was happy, "she says. As something new, she took control of her life and her calendar. When you no longer need to fly around the world and perform and give interviews, you can plan your own life. Kim Wilde enrolled at a degree in horticulture. She had for some time put more and more effort into the couple's big, sprawling garden. Nature was starting to sneak up on her, and she watched the changing seasons, colors, and started to create such a garden, you can have children and family in.

"Yes, I know a meta sequoia glyptostroboides (a conifer, ed.), when I see one," laughs Kim Wilde. Her press lady has placed herself beside our table and tries to break in sometimes. Kim Wilde ignore her completely and talks on with food in her mouth.

"I have had a number of tasks which celeb-gardener where someone thought it was fun to get their garden landscaped by Kim Wilde. And then came television and books'. Kim Wilde was hired as host to several rounds of various garden programs, where she was to transform people's dumps into lovely gardens. She published a few books on gardening, but got tired of the green career. "I think TV is boring. There are always a lot of talking down to people, that I do not like, "she says.

Nena on the phone

Press lady gets sneaked in the word that a taxi wil come pick Kim Wilde up to be on to the next interview within 10 minutes. I therefore ask how she got switched those rubber boots and mud out with sequins and stilettos again. 'There was something with a retro or revival wave, where people like me and ABC, Human League and Heaven 17 began to get booked again. And people were somehow ready for us. I was really scared the first time I had to perform again, but the crowd was happy to see me, even in England, where people are otherwise quite snobbish with their pop music '. Shortly thereafter phoned her German colleague from the old days Nena, and the two recorded the song "Anyplace, Anywhere, Anytime," which was a big hit in Europe.

Rose from the ashes

'Me and Nena have followed each other and shared magazine covers, and even though the press tried to make us rivals in the 80s, we have always liked each other. When we recorded the song Nena was at a low point in her career with a failed marriage and a difficult economy. But with our song she rose like a phoenix from the ashes. And she took me with her, "said Kim Wilde. Especially in Germany, Austria and Switzerland Kim Wilde is busy today. She has "made peace with the past," as she puts it, and is happy to be at eye level with her audience. An audience which is the same as back then, now just with mortgages and children.

So few times a month Kim Wilde aka Mrs. Fowler is flying out in Europe and give someone a musical trip back in time. "The rest of the time I'm just a Hertfordshire housewife who rips my kids out of bed and follow them down to the bus stop in the morning. Fits my garden walking
my dog and ensure that there are clean clothes for the kids. We are not a perfect family by any means, but there is more than enough love to smooth out the bumps. "

Kim Wilde
Born Kim Smith in 1960. Child of musicians Marty Wilde and Joyce Baker, grew up in London.
At age 20 she released her debut single 'Kids in America', which was a worldwide hit and was followed by the album 'Kim Wilde'.
Since then she has released another 11 albums, the latest 'Snapshots' (2011), and has had big hits with songs like 'Cambodia' and cover the tracks 'You Keep Me Hangin' On 'and' Rockin 'Around the Christmas Tree' with comedian Mel Smith .
In the mid '90s she dropped the music when she was married to musical actor Hal Fowler and got the children Harry and Rose, who she lives with in Hertfordshire, one hour from London.
Kim Wilde took a degree in horticulture, hosted on BBCprogrammet 'Garden Invaders' and published two books on gardening. From 2001 she took part in several major eighties-revival-tours, and in 2003 she had a major European summer hit with Nena subtitled 'Anyplace, Anywhere, Anytime'. 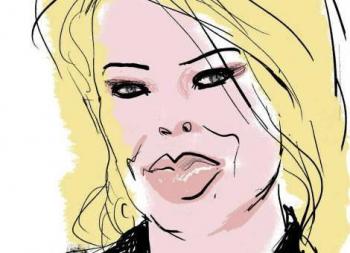