A prosecco with mrs Wilde

He has spent his youth with her - but he has only spoken with her this weekend. Holger Fischer was one of the lucky winners of a meeting with a certain Kimberly Smith. Better known, no, one can say definitely: world famous by the name of Kim Wilde, and as a singer of songs like "Kids in America", "Cambodia" and "You Came". The 50-year-old British woman was the star guest at the launch of MDR-summer tour in Landsberg, the meeting - new German "meet & greet" - was raffled off by the broadcaster and the MDGs.

Dip in the pool

Clock at 20.30, half an hour before the concert begins, Holger Fischer and his girlfriend Stefanie and four other Kim Wilde fans could meet their icon. With a glass of Prosecco they pushed on together, then were allowed to ask questions. For example, how she managed to keep fit, Holger Fischer wanted to know. You just live healthy - and every day, even if it's still so cold, she jumps in her swimming pool, the singer replied.

Holger Fischer was happy twice over the meeting: he had seen Kim Wilde, even on their sold-out concert hall at the end of May in Handel's Open, but then, unfortunately, he couldn't snatch an autograph. This time it the man hailing from Halle could take things more relaxed, because of course the singer took time to meet all the signature requirements - girlfriend Stefanie Fischer had also brought the latest CD of the star to sign.

The beginning of the summer tour was nestled in the Landsberger 1050-anniversary celebrations. A stone's throw away at the rock stage, and on Sunday there was under the theme "Fabulous Landsberg" a large medieval market.

Also the city bet, awarded by the MDR, won with flying colours. Their job: The people should represent all 16 countries participating in the Women's World Cup. Mayor Henry Olaf threw himself to that end even in a Napoleon suit. As a reward, there was the energy company Envia-M 1000 euro for the children and youth of the town fire department.

All parties would certainly deserve one thing: better weather. All day it had dripped, it was raining in the evening then a right. Die-hard Kim Wilde fans could not be deterred. Neither could the singer. She offered a one-hour show, during which of course also all her big hits were played.

The city jubilee will still be celebrated up to the 10th of July. The programme is available at: www.stadt-landsberg.de 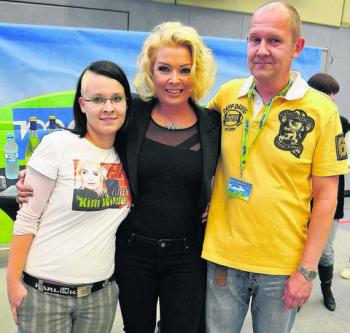