With "Snapshots", the artist offers an album consisting essentially of hits that have marked his personal history.

Pop icon of an entire generation, Kim Wilde is back with a humble and generous project. Drawing on a musical heritage that spans five decades, she rearranges fourteen pop hits by sticking her voice to them.

Are these pop hymns that you cover related to personal memories?
Absolutely. I was 4 when I first heard "Anyone who had a heart" by Cilla Black. I literally fell in love with this song which, since then, has been part of me. It was in 1964. I don't have such an intense relationship with all the tracks on the album, but all of them mean a lot to me. I am also a big fan of Diana Ross and the Supremes, which I had already covered "You keep me hangin’ on" when I started. It was natural to pay tribute to him again. As for Kirsty MacColl, she played a great role in launching my career in 1981. Taking up "They don’t know" is a way of thanking her.

By calling this disc "Snapshots", are you suggesting that a song is a photograph in some way?
This is the case. Like a photo, a song connects you to a moment specific of your past life. A song is a sound postcard. It’s a painting in my mind. My wish with this project has been to make a new version of pop tunes spanning five decades. I was necessarily forced to make choices, because it is impossible to summarize a decade of music in one single title. This album is also intended for my fans, who continue to be a source of energy and inspiration for me.

In your youth, you spent a fair amount of time in London's punk clubs. What attracted a girl as wise as you?
If I loved their rebellious attitude towards society so much, it was certainly because I was very rebellious myself. I liked how they did it to upset the adults. But more than their rebellious spirit, it was their music that attracted me first of all. The energy released by the Sex Pistols, the Clash or the Buzzcocks fascinated me, as well as their writing. I do besides a nod to Buzzcocks and Cure on my album.

"Snapshots" is a journey into the past. Personally, do you tend to remember or glimpse the past the future?
I try to live in the moment, but looking to the future. From a musical point of view, it would be foolish not to look back. Music has given us so much. There is a gigantic musical heritage at hand, which has been bequeathed to us. We need to rediscover the music of the past.

Are there any artists from the current scene who hold your attention?
I really like Jessie J, whose career I've watched since her beginnings. And Lily Allen who, in my opinion, has a very beautiful voice and a very personal writing. Good music is everywhere, in all styles. I like rock, electric guitars. We just went to see Metallica in concert with the family, because my son is an ultimate fan. I also mentioned my love of rock on my previous album, "Come out and play". Rap and dance music is also part of my universe.

What do you think is a good song?
It's a song that touches my feelings, that conveys a special emotion to me, and most of all, that makes me feel good when I listen to it. It’s a bit like friendship or love. If you feel good in a relationship, it is because it is of quality. Music has something magical about it, because it can have a personal impact on those who listen to it. It's pretty crazy when you think about it: one same song for a few minutes can act in the lives of millions of people for many different reasons. It’s a unique phenomenon!

We know your passion for gardening. Did you make yours the advice of Voltaire ("Cultivate your garden") which implied that it is necessary to take care of yourself?
Indeed, gardening occupies a big place in my life. It’s a place where I can give free rein to my current desires: joy, dreams, loneliness, reflection. There are many similarities between the garden and the soul. Like a garden, our inner life requires patience, persistence, hard work and a lot of attention. Ours is so pleasant that we spend as much time with our family as we do inside the house.

A sincere and very trendy approach

Following in the footsteps of other shoe sizes who have produced a collection of covers (Peter Gabriel, Toto, Ozzy Osbourne, Nada Surf, Def Leppard, Placebo), the approach of the British Blondie, if it is sincere and daring, is of uneven quality. It stands out from the crowd thanks to successful  arrangements and great sensitivity: "To France" by Mike Oldfield, "Wonderful life" by Cilla Black, "Sleeping beauty" by Tasmin Archer and "Ever fallen in love" from the edgy Buzzcocks. The other covers (Suede, Erasure, Diana Ross, The Cars, Bowie, The Cure) are pleasant to listen to.

The fact that Kim Wilde chose to interpret David Bowie's "Kooks" with her husband, actor Hal Fowler, reveals her attachment to her family. Two kids and a solid marriage is rare in the pop business. When you know that her father (rocker Marty Wilde) and her brother Ricky wrote all the hits that made her career take off (“Kids in America”, “Cambodia”), we understand where her roots and her values ​​are. 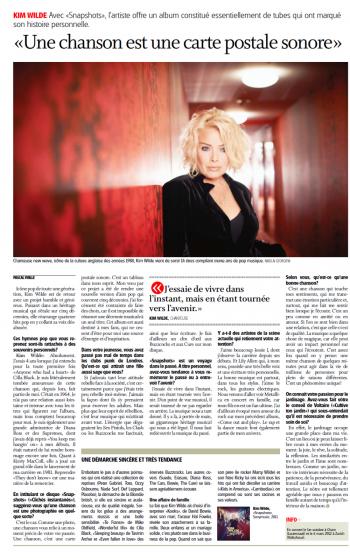