Kim Wilde is on tour with her new album "Snapshots" in March, also in Cologne. On the CD, Wilde sings only cover versions of songs from four decades, which mean a lot to her.

Mrs. Wilde, your career began at age 20. Would you have believed then that you are 30 years later are still on the road as a musician? What was your idea of life back then?
At 20, I was very ambitious when it came to my career. I've lived for the very moment and I do not make too much about my future. But I knew already that I would like to have a family. If you had told me then that I would give concerts with 50 still, I would have been overwhelmed.

Your new album is out now, only cover versions are included. Why didn't you record new songs of your own?
Last year my last album "Come Out And Play" was released, which also received good reviews. I did not think so soon about releasing another album. My record company heard me sing cover versions at the gigs and proposed this record to me to celebrate my 50th Birthday. I gave them pictures of myself, from my fans and of my dog. It should be an appealing package.

And the cover songs you will present in March, when you give a concert in Cologne?
Yes, but also old Kim Wilde hits. Me and the audience will have fun.

The songs are from four decades. How did you choose them?
I had to like the songs and I had to be able to sing them. It was instructive to learn how many songs I can not sing. One of the songs included is the soul number "Anyone Who Had A Heart."

When you got to know that song, you must indeed have been very young.
That's right, I was four years old. But the mood of this song had a big effect on me. I remember that I was somehow mysterious. It spoke to me back then by the music, the voice and the text very much.

Perhaps the most surprising yield is "Ever Fallen In Love," from the punk band Buzzcocks. How did you get that?
In the late 70s, I hung out a lot with college friends at clubs, where a lot of punk was played. I loved the simplicity and energy this song brings.

The whole title is, "Ever Fallen In Love (With Someone You Should not Have)" Did this happen to you too?
Very often.

Who was the worst thing of all?
That I can not say, but my advice to young people who have dates is: leave most of them be and wait for Mr. Right.

Have there been reactions from the artists that you have covered?
No, unfortunately not. Most of the songs on the CD are from English artists, and in Britain it has not yet been released.

Is there a song that you would never cover, because you find it perfect as it is?
A lot actually. It was like this with Blondie-hits. I realized very quickly these are sacred. For me the most surprising is my cover version of "Inbetween Days" by The Cure. It was a challenge to bring in a certain freshness to the playful title. It's also interesting, if a woman sings a song that was sung before by a man.

Do you have a special connection to Cologne?
I have been to Cologne, at the Christmas market. I also bought a love lock on the Hohenzollern bridge for me and my husband. I think I'll show it to him once on a romantic weekend. 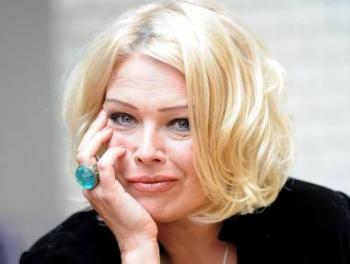