Pop singer Kim Wilde on comeback attempts and her album "Snapshots", angry comments on Twitter, and the game with sex appeal.

The really big time by Kim Wilde was the '80s, when one couldn't imagine the charts without her, with hits like "Kids in America", "Cambodia" and "You Keep Me Hangin 'On". From the mid-90s, the now 50-year-old Briton has worked primarily as a landscape gardener, before she had a brilliant comeback at the beginning of the new millennium. Just in time for her her 30-year stage anniversary she publishes on 26 August a record  of cover versions of songs that are not from herself, but they have accompanied the course of their lives.

Mrs. Wilde, you have just ordered a cup of tea - do you drink tea as a pop singer, to do something good for your voice or as an Englishwoman, to maintain the tradition?
A good question to which I have, however, no response. But I readily admit: it really is not rock'n'roll. However, I have always enjoyed drinking tea, so I stay true to my own particular tradition. There's quite a story attached to it. Do you want to hear it?

Of course.
I once sat in an airplane, as there was severe turbulence and I really was afraid, that we'd crash. And what did I do? I ordered a cup of tea at the flight attendant. I figured if I must die, even then not without a last cup of tea (laughs). But as you can see, I have survived back then.

Their new album "Snapshots" includes only cover versions of songs by other artists. You have described it as a musical photo album of your generation - those are big words.
Yes, maybe. But at my shows I always played a lot of cover versions, which are always received well, and the timing for such a cover-project is now perfect: I am 50 years old and for 30 years in the music business, so I can do something special . In addition: The songs are already written. So I have so much less work than usual (laughs).

While they may be perceived as a pop singer, but have also always interested in other genres. What are the biggest differences when one compares for example with pop punk?
Surprisingly, the differences are not as great as one might think. Bands like The Cure, Suede, or the Buzzcocks, the songs on my album can be heard, were never perceived as a pop, but differ in their artistic approach, not so much from the classic pop approach. While I have reduced these pieces on their musical base, I have tried to illustrate this. What remains are, great melodies, great lyrics and understandable emotions.

There are songs that evoke memories in one. Why is it that music is able to convey emotions from the past into the present?
It's hard to put into words, but that this elusiveness is the great thing indeed. Music unites people, brings them together and connects them with each other much more intense than religion. I already understood as a child and have always trusted music ever since.

Although the record "Come out and play" was released only last year, in conjunction with the release of your new album there's again talk of a comeback. Does this sometimes goes on your nerves?
No, that's no problem. I still release records, was recently on stage with Debbie Harry, have collaborated with La Roux - that has nothing to do with a comeback. I read but do not get a lot of newspapers and, consequently, with very little of what is written about me. Recently, I fell into Twitter and of course I received a few rough comments.

What was it?
Oh, the usual. It was about how old I am now that I think about retiring and I should rather turn to the back garden.

Did it hurt you?
Of course - if only for two minutes. But in those two minutes I was really mad (laughs)! But I also think it's great to be able to build on this way direct contact with complete strangers. This is definitely worth the risk of pain.

Then you apparently have grown over the years, a thick skin.
Yes, absolutely. Nothing can hurt me. The priorities in my life but have also shifted. Previously, my career was everything I had - that's not so anymore. Meanwhile, I have a loving husband, two great kids and I could also pay back the landscaping when I would feel like it.

On your album you have covered a track from the girl group The Sugababes. You once mentioned that you have always had a soft spot for the strength and sexiness of girl bands as a teenager and would even like to have been part of a girl band. Why has it never worked out?
To be honest: The unexpected success of my first single, "Kids in America" was to blame. There I was really into bands like The Shangri-Las and the Modettes, and when the front woman for the Modettes stopped, I was asked if I do not want to stand in for them. At this time, "Kids in America" had come straight into the charts, so I had to reluctantly decline. I've very nearly slipped past them.

However, they could now ask, for example Nena, with which you have already worked together several times successfully.
Yes, that's actually not a bad idea (laughs). She and I shared in a girl band - that I could imagine, in fact, very good. I will ask her about times when I see them the next time.

There was a time in your career where you have played very intensely with your sex appeal. How important is this erotic game with their own bodies still to young, aspiring artists?
I think that today is no longer as important as ever. There are so many great artists, it simply does not need to take this sexually-offensive way to distract from the one or other vocal deficit. Take a look at Adele only once: she is incredibly successful, without having to use their femininity. In my day it was customary, however, to also use his body to express themselves artistically.

Did they urge you to do so back then?
No, no - that was my own decision. I just liked to style my hair and striking to wear bright red lipstick. I enjoyed the fun, but it works and was certainly not all artists.

That hasn't changed much over the years.
No, it didn't. However, what has changed is the general idea of what is beautiful. The perception of what is considered beautiful, is today far more than it was then - and this is a good development. There are today no longer only a single ideal of beauty, and I think it's great. 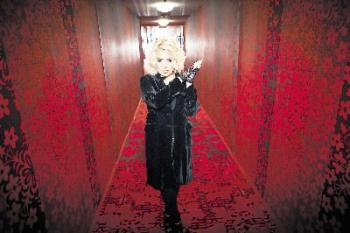