After dazzling performances in the studio and Luxembourg in the Morbach Baldenauhalle 2007 Kim Wilde is in Trier again on 8 March 2012. In the Europe hall, she will present her new album "Snapshots", which consists entirely of cover songs, and her greatest hits. With songs like "Kids in America", "Cambodia", "You Keep Me Hanging On" and "You Came" was the attractive British woman among the icons of the 80s. With 16vor she spoke about her career, her break from the music business, about Nena, who helped her to her comeback, and on what future plans she has.

In the mid-90s to be retired for a few years out of the pop business. What was the reason?
I've noticed that the party ends. I did not want to be last at the party.

You had a successful comeback in 2003 with the song "Anyplace, Anywhere, Anytime" as a duet with Nena. Do you have any contact with her?
We do not talk to each other regularly. I last saw her at her 50th Birthday (Editor's note: March 24, 2010). That was very nice. But we have no ongoing relationship. If we see one another, it feels good. She has brought me much success and encouraged and inspired me to re-enter the music business. I was quite a long time out of it, but I thought if Nena can do it, maybe I can do it too.

With "snapshots" have you taken a complete cover album. Under what criteria you have selected the pieces?
First, it should cover a maximum period of time: from the time when I started as a child, to listen to pop music until the present. The oldest song is from 1964 (Editor's note: "Anyone Who Had A Heart" by Dionne Warwick) and the most recent one is from 2007. I also wanted songs that I could be something new, and that fit my voice. We have tried a few pieces that have not fit me. But I can not tell now, what they were (laughs).

Your family is very musical. Which of your siblings and relatives accompany you on the tour?
My brother Ricky is my musical director, he will be there then. And my niece Scarlett. She is my background singer. On some performances my husband may appear to sing 'Kooks' with me. The rest of my band is like my second family.

You seem a particularly close relationship, particularly with your brother. Is it always harmonious?
Yes, always. Sometimes he's a stubborn ass, but I've always respected his opinions very much. I am happy that I can benefit from his talent. He is also a great guy. He is very funny, a very talented musician and a great band leader. He is the soul of our group.

Some of your colleagues, such as Madonna and Cyndi Lauper to play in movies. Have you ever thought about it too?
No, I've never considered myself an actress. I married an actor and I know what the special abilities are. But I do not think I have them.

Is there anything else you want like to try?
There is not much that I still want to try. I wanted to be a figure skater, but I think I'm too old to start these things.

So you are not planning to write a novel or an autobiography?
No, I think people already know more than enough about me. 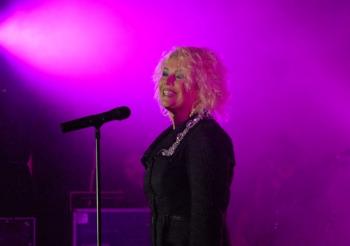