"I have a voice that shows emotions"

To celebrate its 30-year career, Kim Wilde is back with "Snapshots," an album of covers in homage to pop songs that have marked her since her childhood.

Thirty years separate the debut of Kim Wilde with her hit "Kids In America" and "Snapshots", her new album of covers. At 50, her radiant presence replaced the pout of the Eighties. Perhaps it was time she moved away from the race of the charts in the Nineties, to return more serene in the 2000s. "I stopped singing at 36 years to devote myself fully in my second career of landscape gardening. At that age, the end of the vocal cords develop. When I came in early 2000s, I was surprised myself by the strength and maturity that my voice had acquired during this time. And when I hear my father, Marty Wilde, who has never sung better than now at 72 years, I think I have good genes," she says, her eyes
filled with stars.

From the Cure to Bowie via Mike Oldfield

On "Snapshots", the English singer celebrates her first love story: pop music. "I was 4 years old when I heard "Anyone Who Had A Heart" by Cilla Black for the first time in 1964. This album is a celebration of my intact passion for pop," she wrote in the booklet of the disc containing 14
songs of artists who have marked her. She covered, in bulk, "In Between Days" by The Cure, "Remember Me" by Diana Ross, "Wonderful Life" by Black, "Kooks" from David Bowie, a duet with her husband, Hal Fowler, and "It's Alright" from the English boy band East 17.

But is there a piece she especially likes to sing and how has the choice of songs come together?
"One of my favorite on the album is "To France" by Mike Oldfield. I listen to it in the car lot. As the choice of songs, I wanted it to be as spontaneous as possible. We realized the disk very quickly and I enjoyed the process. Some pieces have emerged, others were suggested by
my family and my fans. And we have also decided to leave some aside because my voice did not fit on it." It goes back to voice. This unique voice, fragile and melancholy, that has deeply marked the Eighties, while her colleagues sang like Minnie Mouse.

So just how does she feel about her voice while singing?
"I love her more today than in the past because it has improved. In the 1980s, perhaps I was not fortunate enough to sing with the same assurance and as much fun today. Sometimes I find it a little thin, but I am aware of my limitations. The voices that touched me were never technically perfect. I think I fall within the category of voices that communicate and give emotions.

"Snapshots" is in stores since Friday, exclusively in Germany, Austria and Switzerland. And she will be performing at Volkhaus in Zurich, March 6, 2012. The obvious Swiss question: does she still love the Toblerone? "Hmmm, I prefer champagne truffles today. For me, Switzerland is Ski holidays in Grindelwald, I always enjoy eating a good fondue!" 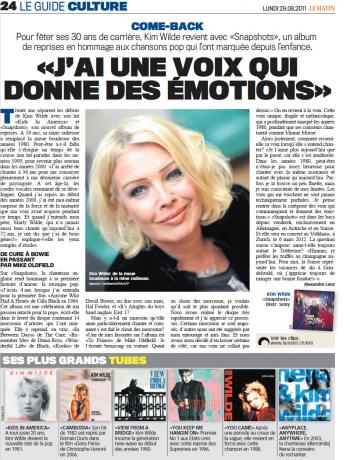