'I'm so grateful to Nena'

Pop icon Kim Wilde had her big hits in the Eighties. 'But today I have more fun at work and even more to do', says the British singer who has, over her 30-year career, never lost her appeal.

With a radiant smile on the lips Kim Wilde comes across from her car. The dyed-blond hair is pinned up, her lips discreetly emphasized, but her dark-painted eyes stand out so much more. Kim Wilde in a good mood, has appetite for the concert hall.

Whether it is just as sexy as in the 80s, she could not assess. 'I have brought two children into the world', said the 50-year-old. But she puts much emphasis on staying in shape. 'A personal trainer keeps me moving. Every morning I jump into cold water, which is difficult to overcome, but keeps me fit.' For tennis, however, she is not interested, but her husband does. 'But I find it inspiring when people are trying so obstinately to win.'

She has received much inspiration for music from her colleague, Nena. 'She brought me back at the centre in 2003. For that I am very grateful. I would like to work with her again. She is so dynamic', Wilde praises her German counterpart. It was also Nena who advised her to re-record her songs from the Eighties. 'At first I doubted, especially about 'Kids America'. But she was right. I had to give the songs a more modern sound.' The fact that she was a star of the Eighties, she could not hide. 'It does not bother me. Meanwhile, the Eighties are back in again and I'm cooler than in the '90s.'

For several years, the singer has a German record label contract, is therefore connected to the country a lot. Especially since 10 years she is her more often. 'But I am ashamed that my German is still as bad. I've made up my mind to get better.'

On Friday evening, the singer presented, together with her brother, who writes most of their songs, and her niece (background singer), a good mix of her old and new hits. And one thing was clear: in Halle, Kim Wilde is still an icon. 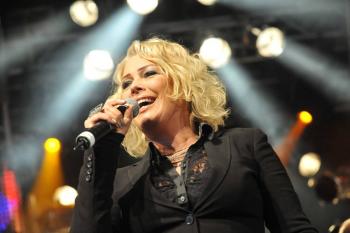