The singer, who had many hits in the Eighties and Nineties, such as 'Cambodia', made a comeback together with Nena with 'Anyplace, anywhere, anytime' a few years ago. And the current album 'Come out and play' became a chart success too. In summer she is live on stage!

Kim, you're very popular in the [gay] scene. What do you think about being revered as an icon in the scene?
The fact is that I have very many fans. I see them, of course, always in the audience, but I do not differentiate whether they are gay or not. All I see is that they freak out in the front rows and have fun. But I am aware that I have many gay fans, like for instance Kylie does. I think it's mostly my music and my voice reaching the audience. I think people want to hear voices that tell stories. And my voice can do that... (Laughs). I always sing with all my heart, and so I reach my fans - that's important to me.

Kim, you were very often in Germany: TV shows, concerts ... is there a city that you particularly like and holds beautiful memories for you?
Yes, during the 'Night of the Proms' tour, I was in Nuremberg at the Christmas market. I love the atmosphere there. Cologne, Hamburg, Munich and Berlin have become very familiar to me over the years. I am now pretty well versed in these cities, I have been there for thirty years.

'Kids in America' is celebrating its thirtieth anniversary - what do you feel about that?
I am pleased about the anniversary and I had fun with it, wearing a similar outfit on stage like in the video! I wore the black and white striped T-shirt, together with a black jacket from my husband! "Kids in America" is a timeless classic, the people love it. It's fun to perform it live, I'm very happy to see how the audience feels it and celebrates with the energy. An exceptional song that remains. I am honored to have this song in my repertoire!

Who chooses the songs that are played on your tour?
We sit down together and try out. Everyone gives their input. We see what sounds best live ... There was also a list of desired titles from the "Perfect fans". As for cover versions, Scarlett (Km's niece and backing vocalist) proposed "Forever Young" and "Sleeping Satellite". I like both songs, I could not imagine singing them. At the rehearsals, we have incorporated my own touch and the result was highly appreciated by my audience on the tour.

What is more important to you as an artist, artistic freedom or commercial success?
I was always in a very good position to be successful both musically and commercially, and to do what I wanted to do. I could try out a lot and have worked with many different and interesting musicians. Also concering my new album "Come Out And Play": it reflects a part of me. I am very happy with it. 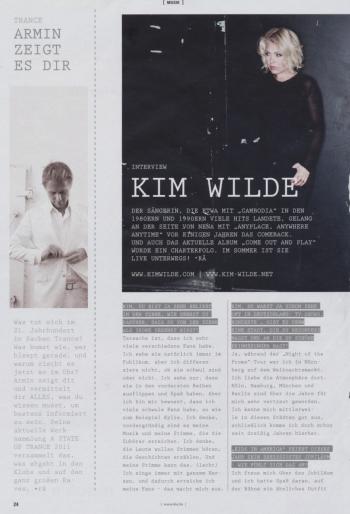 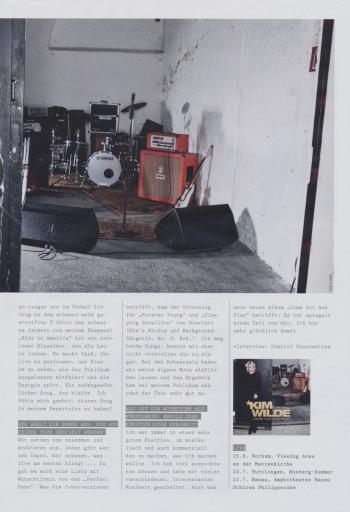