You can tell how much Kim Wilde is looking forward to hitting the road with Status Quo by the sheer joy in her voice when talking about it. The singer – celebrating 30 years in the business – is part of Quo Fest, which will see her team up with Francis Rossi, Rick Parfitt and the lads as well as Roy Wood for a party gig at the Metro Radio Arena in Newcastle on December 16.

“There is a very strong thread that links us all and that is we have all made pop records that people love,” Kim, who has just turned 50, tells me.  “When people love pop records, they don’t just love an artist, they love pop music. We’ve all got a bit of a rock edge to us. We’re not afraid of sidling up to a rather loud guitar. There’s enough that connects us. and the most die-hard Quo fans should enjoy what I’m doing as well.”

Kim, in fact, has known the Quo for years. “They’re the blokes you meet down the pub, although how many times has Kim Wilde sat down the pub and had a chat with the Quo?” she laughs.  “Not as many times as I would like to, is the answer to that, mostly because I am a mum and need to be at home. But they are regular guys, just really good fun and always have a cheeky look on their faces.  They’re like a bunch of schoolboys, really, just with some grey hairs these days! There will be a good party vibe to it all.”

It was back in 1981 that Kim Wilde first shot into the UK charts with her anthemic Kids In America.  She became Britain’s most successful female act of the 80s, earning a US number one too with You Keep Me Hangin’ On – the last British female to accomplish that until Leona Lewis came along.

Other hits include You Came, Chequered Love, Four Letter Word, Cambodia, Love Is Holy and View From A Bridge. Does it feel 30 years to her? “It really does!” she giggles.  “People always say how time’s sped by, but actually it hasn’t at all. It feels like a long time ago to me.  The time that speeds by is when you have kids, as they grow up really quickly, I agree with that.  But my career, starting at 20 years old, and now 50, a lot of water’s gone under the bridge, a lot of stuff’s happened. It’s been a really rich and rewarding life, challenging, diverse, creative, exciting, fun. It does feel like 30 years – but 30 great years.  In the last 10 years or so I’ve been doing a lot of live music again, we’ve got a great band and we do a lot of work all over Europe and in the UK and we have a really good live reputation now, which is strange as my career began when it was all about MTV and videos and magazines and pictures, celebrity stuff.  Now it’s gone back to the roots, which is a bit weird but it’s great.”

She’s revving up for a festive hoe-down at Quo Fest.  “I’ve done a few gigs with Status Quo over the years. I’ve bumped into them a few times at festivals and they always go down a storm. When they asked me to go on tour with them I was over the moon as it had fun factor written all over it.  It’s the countdown to Christmas, the end of the year. It’s been a tough year for all of us one way or another and it will be great to go out with a big smile on our faces. It’s the perfect office party solution.  You would earn a lot of brownie points with your employees if you forked out for a night out at Quo Fest.” 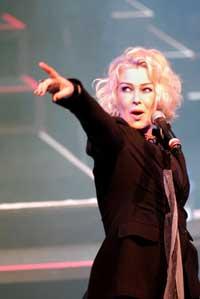