Kim Wilde back in time

Kim Wilde is 50 years old. To those who were teenagers in 1983 and listened to "Kids in America" time and again, it's a shock. However, the former idol of the eighties saw his fifties, reached in November: "I sometimes feel old and tired, but for a pop star, to survive to this age, it's a good thing!", muses the singer, who came to Paris for her new album 'Come Out and Play' and a sold-out concert tonight at La Cigale.

"Fifty years is the time when we get our heads cleaned up," says Kim Wilde. "Recently, I got into my attic to put order in my files. It's a good way to move on." By putting his nose in his old records, the British singer was gripped by nostalgia: "I listened to them again and my first success I wanted to find the magic formula of pop, which is a bit lost today."

This is not a retro disc

So it's vintage Kim Wilde, with synths and electric guitars, we hear on this new album recorded with her brother Ricky, like all its predecessors. Kim has even invited on two tracks of other stars of the era, Nik Kershaw and Glenn Gregory of Heaven 17. "We did not want to make a retro record, we tried to refresh the sound, while ensuring that it sounds authentic. In concert, the fun will begin as it did thirty years ago."

Kim Wilde does not hold good memories of the Eighties: "It was a fantastic time which allowed me to travel around the world. At the same time, I was very young, my heartaches were in the press..." She hasn't got many friends from that time, but no shortage of Laurent Voulzy again when she comes to Paris. The French had dedicated a song, 'My nights without Kim Wilde' in 1986. "He's a faithful, I know he always supports me."

Although her last real hit dates back to 1988 ("You Came"), the pop icon has released four albums since, while cultivating her passion for gardening and raising her two children, now aged 13 and 9 years , whose father is British actor Hal Fowler. "My son plays guitar on my album, but he prefers Metallica! In the Wilde family, there is also Jessica, to whom the last song of the album is devoted: "It's my dog!" Kim admits. "I have a close relationship with it, we are very close." There is no doubt that Jessica will prominently in the memoirs of the singer, she began to write. "I have lots of experiences to share," she muses. "I had a blessed life so that, in other lives, I must have had to suffer terrible things! " 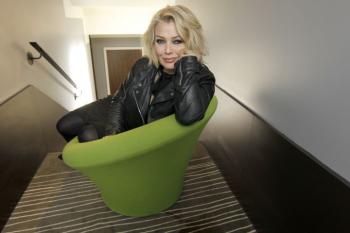