Kim Wilde: "Fame has never made me hysterical"

The glamorous Kim Wilde, icon of the 1980s, is back after ten years of absence.

Kids in America, You came, Cambodia ... Such hits! In the 1980s, at 20, the English woman was a genuine pop icon. Laurent Voulzy even dedicated a song to her, 'Les nuits sans Kim Wilde'. Today, at 50, and after a break from music for a decade, she released a new album, 'Come Out and Play', in French stores Feb. 28. The opportunity to meet the artist, visiting Paris.

How would you summarize your new album, Come Out and Play?
It is a sexy pop album that speaks a lot about love. There are many sounds of the 1980s. People who like good music will be disappointed ... No, just kidding, I think they will love it!

The piece was inspired Jessica you by your dog. Strange ...
I wrote this song while I was in Stockholm. I was sick and stuck in my hotel room. I could not sleep. I thought of my life, my family. It comforted me. And so I thought of this little dog of 6 years old. It is the central element of the family. It is a sister, a daughter. And for this record, I wanted a song soft and emotional to act as an interlude and contrasts with the rock energy.

Even today, you work with your brother Ricky and also with your niece Scarlett ...
Yes, but I chose to because I enjoy their work, not because they are my relatives. Scarlett is a very good writer and singer, she accompanies me on tour. She is 21 and is terribly funny and it made me discover a lot of modern sounds. (Kim takes a coffee and goes into raptures, ed.) And I must say that I love this machine. This is the best invention in the world!

Have you passed the virus to music with your children?
Harry plays the guitar, he plays a solo on a piece of the disc. He loves Metallica. He's his mother's son, because I worship this group. I also have a laminated poster of them. My little girl of eleven years playing the piano.

You started at age 20, how did you handle your success?
My father was famous in the 1950, 1960, so I had a glimpse of celebrity. When it happened, I was not surprised. I'm not hysterical, I kept grounded, even when I came to Paris and I was treated like a princess. My career has had many ups and downs and I always kept a sense of reality.

In 1996, you did a musical break for ten years. Why?
I was tired of being that Kim Wilde. It's been awhile since I started in the music industry. I was 36 years, I needed to rediscover the passion, I aspired to a more normal life. In 1996, I married very quickly, it was only six months since we met. And I wanted to build a family. So I started gardening (see below) and I had my two children.

The Kim Wilde today she looks like that of the 1980s?
I have not changed. I had a walkman and listened to records all day. I had an impressive collection of vinyl. The music was already at the center of my life. It is always the case!

During her break from music, Kim Wilde took out her shovel and rake. 'I've gone back to school to learn this trade. My teacher was rather scary and tough but I worked very hard. I even had homework to do.' Gardening brings her peace and serenity. A job where she became known as writing books and participating in TV shows. 'It's exciting and it allowed me to work at home and see my children grow.' A logical passion for a beautiful plant. 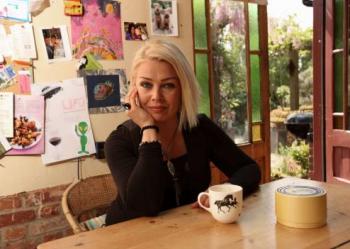