1. That's my dad Marty Wilde, and my husband Hal kissing me on the cheek on our wedding day back in 1996. Hal and I met when we were starring in Tommy The Musical in London's West End and within six months we were married, so we did some fast moving. We had the ceremony at our local village church in Hertfordshire and then had a big reception at our family home, with Antony Worrall Thompson doing the catering - how posh! Dad got up and did a gig, and the whole day was really magical. I felt like royalty - there were lots of paparazzi and people lined the streets as we rode by in a horse-drawn carriage. I was a princess for the day.

2. I love Boy George so much. I've worked with him a lot in the last few years, on the 80s revival tours, so we've been on a lot of coach rides together. He used to scare me back in the 80s though, he really was an overwhelming personality. I was very young and he was clever and ahead of the game so he was intimidating - but he's much more of a giggle now. I wasn't very rock 'n' roll back then, but I was living out of suitcases and going all over the world. My most debauched time was going on an all-nighter with Steve Strange. I remember finding him in the morning lying in his four-poster bed with a cold compress on his head, moaning. I'm more rock 'n' roll now than I ever was in the 80s - I'm growing old disgracefully.

3. My agent said he'd had a call about a show where celebrities go off to Thailand and have colonic irrigations, and I said, 'Um, you must be joking.' But when I saw my girlfriends and they were like, 'You're crazy - you've just had two babies, you're worn out, you should go'. So I went as a has-been with two kids, very happy, and not worried about my career. My body got a good clear out and I loved it so much I went back with my sister to do it again. Here I am with Keith Duffy, Richard Blackwood, who made us laugh a lot, and Tamara Beckwith, who was enchanting.

4. Chris Evans and I dated for a while, and he was obviously a legendary party guy at the peak of his success. He was irresistible company and everything around him was a whirlwind, so I got sucked up by it. I didn't match him on the drinking - I was usually very professional and went home early, although we did have few debauched evenings. After a while, though, I needed to come back to earth and let him go off and create more mayhem.

5. I don't know where to start here. I'm in a legend sandwich. This is when I won the Brit for Best Female Artist in 1983. Pete Townshend is my fairy godfather - if he hadn't written Tommy and cast me, I wouldn't have met my husband. He's a lovely man, I'm very fond of him. I remember Paul McCartney saying 'Well done love', in his Scouse accent. I loved his wife - Linda was my style icon and I went to the hairdressers with a picture of her mullet. I toured with Michael Jackson in 1988, but on this occasion he didn't speak. he was strange but astonishing.

6. Adam Ant and I dated a little bit. This is us at the Brits in 1990. He was a huge star at the time and we were in similar situations, which drew us together, but we never became a proper item, just went out for a few dinners. But I have a huge soft spot for him and it'snot been nice to see him go through his troubles in recent years.

7. These are my children Harry and Rose (right and centre), who are now 13 and 11, and my nephew Mason (left). Rose is a nice piano player and loves to sing, and Harry did a great guitar solo on an album I made over in Germany. He also loves skateboarding - he's a cool little dude. We had them quickly after we got married and we've all grown up together. The first five years of family life were exhausting, having two young kids and retraining as a gardener. And now, I'm performing again, so it's gone full circle. People still scream and get overexcited, and I grin silently to myself when it happens, thinking of myself loading the washing machine and screaming at my son to put his shoes on.

8. Hmm, that will be me pouring tomato sauce on Zoe Ball's head. I've never seen this before but clearly it must have been on The Big Breakfast. I remember the phone call from their office saying that Chris Evans wanted me to go and do the job and I was like, 'Oh, nightmare, live TV - never done that before', but I had lots of support from Chris, who made me feel brilliant all the time. The pressure was immense though and I'd announce things that were about to happen when they weren't. It wasn't a slick show and I wonder if they mucked me around to entertain the public. I don't know why we put mash and peas on Zoe's head but, of course, it must have been Chris's idea. 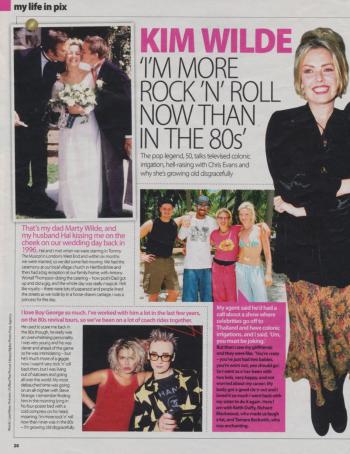 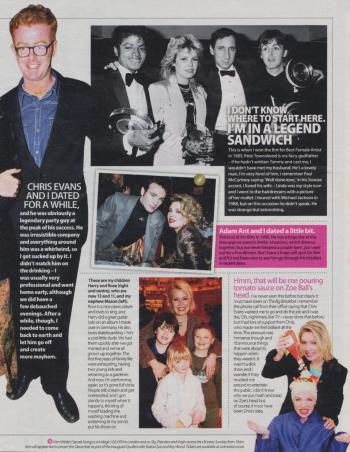