Me and my school photo: Kim Wilde

Here I am aged 13 at Presdales School in Hertfordshire. I’d moved about a bit before I reached Hertfordshire. I was born in Chiswick in west London, then we went south-east to Greenwich, where we lived until I was about nine.

I attended a rough state primary near Greenwich until I was seven, when my parents sent me and my younger brother Ricky to Oakfield, a boarding school in Dulwich. I remember feeling a bit lost.

It was a lonely experience, but it didn’t last long. Mum and Dad [Fifties popstar Marty Wilde] moved to a chocolate-box cottage in the Hertfordshire countryside, and the local village school in Tewin was just as idyllic. I was very happy there.

We had a very sweet headmaster, Mr Furlong, a white-haired man with a smiley face. He got on well with my parents, who had a lot to do with the school. Dad even wrote a space-age nativity play and we did a family concert in Welwyn Garden City to raise funds.

I don’t remember my dad’s fame being a problem. Maybe Ricky got teased – boys will be boys – but I made good friends. My best friend Clare lived just round the corner and we’re friends to this day.

We lived at the foot of Bramfield Forest and were able to build camps, use our imaginations, believe in fairies. It was a lovely time. I was average at my studies, but great at music and art – anything creative. I liked sports and was picked for netball and hockey teams, but not first – more like fifth.

After my 11-plus, I got into Presdales, the same school as Clare. It was very academic and made me feel that being good at art and music wasn’t very important. I was well-behaved, but once joined a sit-in because we decided girls should be allowed to wear trousers in winter. After a few minutes, our headmistress, Mrs Helmore, came in. You didn’t mess with her – so trousers were forgotten.

I came away with five O-Levels and an A in Art, but singing was all I really cared about, especially as it came so easily. While at Presdales, I’d been on the road with my dad and into recording studios with him to sing backing vocals. Mum [Joyce, a former member of The Vernons Girls] was always practising harmonies with me.

I dreamed of being a singer, but didn’t see how I could go further on my own, so I began a course at St Albans College of Art, hoping I’d meet musicians and join a band. I dyed my hair blonde and was a bit of a rebel. I was thinking about doing a degree and needed a job to support my studies, but within a few weeks my life changed dramatically.

Ricky was signed by the famous Mickie Most in London, I came along for a recording, and Mickie signed me too. I was thrilled. Shortly after, the job centre said they’d found me a job in a record shop but it was too late. I was 20 and already recording my first hit Kids In America – my life had taken off.

Kim Wilde’s Secret Songs is on Magic 105.4FM in London and on Sky, Freeview and Virgin TV across the UK every Sunday from 10am.
Kim is appearing at Quofest in December with Status Quo and Roy Wood. For tickets, visit www.livenation.co.uk. 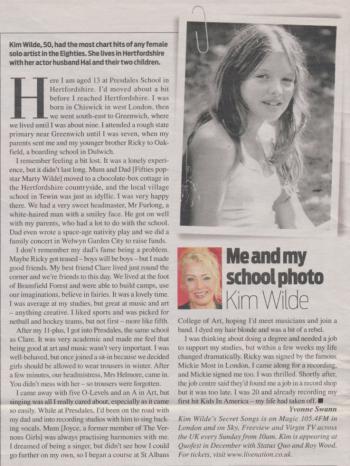