Kim Wilde is back in the music business: recently her second new studio album in twelve months was released, and all over Europe the 50 year old enthuses her fans during her live concerts. Despite the enormous success since her comeback in 2010, Kim Wilde prefers to be a private person at home - and in her garden. Uwe Schmalenbach spoke with Kim about this.

In the summer of 2010, just before you made a comeback with 'Come out and play', you told me you would never go back into the music business as deeply as you were in the Eighties. You were in a bit of a golden cage back then, and after leaving the music business you felt almost liberated...
That's right!

Yes, but now the question arises, how can you make two new cd's within one year?
Yes, yes, that's right... but there's a different psychology behind it and also a different motivation, being a popstar at 50 and being a popstar at 25! Having a family, a husband and children, that's given me a lot of emotional freedom. The cage, which I thought about a lot at the time, was in fact self-made. Now I don't have that feeling anymore, that there are any bonds. And the energy can be found on my last album 'Come out and play' and also the new one, 'Snapshots'!

When one hears you during concerts and hear the new versions of the old hits, one gets the impression that you're not as interested in commercial demands as you were in the old days. Is that also a sign of your emotional liberation?
I think there is a lot of musical freedom these days anyway. Always having to live up to the popularity of 'Kids in America', that is quite a high standard! My brother Ricky, my father and myself have looked up to this hurdle more often than anyone ever thought. There was lots of pressure back then, and it became too much pressure towards the end of my career back then. We all needed a break.

'Come out and play' was a big success after its release. Top 10 in Germany, and also the tour enthused many people. There was no pressure, time-wise. But now you release an album of covers, which everyone knows the original tracks from, with all the impressions they have from those original tracks. Isn't that a big risk?
Of course it is! But that's what I like about it... I love the fact that this project is a bit risky. We could have been totally playing it safe and produced the album that way, but it would have been a very boring album. It's good not to choose the most obvious option, but to move forward in a less predictable way. It's a bit like "Marmite": either you love it or you loathe it! And that's what I love about my projects: that some people understand the idea, and some will never.

But you have to be a competitive woman, because it's a kind of competition to be good at what you do, isn't it?
No, not really. For me this CD was just a beautiful thing I could do. I have no expectations really. It's all about my own experience. What people make of it, is their business. But it doesn't change my experience. And it's not something that will dramatically change my own life: I will still be playing live in the near future - and then do some gardening, walking the dog and take care of the children, sing and enjoy my life and every aspect of it! There's really not much that can harm me anymore - except when I get a terrible Tweet from someone! (laughs) ...hm, yes, then I can  shake for a few minutes. But most of the time I just get lovely messages and I really enjoy that.

Most people are very impressed what you can do during your live performances as a 50 year old. Sure you're not old, but the audience is regularly stunned when they see you dance, prance and create a great atmosphere...
Yes, yes, yes, for me it's simply wonderful, to have so much energy! It comes from the fact that I am a happy person, an optimistic person. And I simply love singing - and I love my band! You know, it's so great to be on stage with these people, it's so inspiring! With my brother Ricky Wilde on stage, my niece Scarlett and Nick Beggs, who used to be with Kajagoogoo. And then there's my drummer: the unbelievable rhythms he gets out of his drumkit! Or Steve Power, our keyboard player: when I met him he was a studious, introvert man, just working with his keyboard. Now he has discovered the 'keytar', which he wears over his shoulder, posing everywhere on stage - it's so funny! We take our music very, very seriously, but we also know how to have fun with it!

So is it again not the commercial aspect that's the most important, but the fun?
Yes! Sure the standards of our work have to be high, and we take care to make them as high as we can. At first it's not much fun, but hard work. But it has to be fun as well. It's a difficult combination that doesn't work as often as it should on stage, in the combination between audience and artists.
When I have a gig day, the whole day is about the audience! I am alone most of the time, and I try to conserve my energy, I don't eat so much and I try to be as quiet as I can. Once I am on stage, the energy is released.

And because of this large amount of energy you're not afraid things can go wrong on stage? You seem to be very confident, anyway!
Yeah! (laughs) It's a miraculous story: it took me a few years to learn how to be confident. But now I am - it must have something to do with the fact that I'm 50 and have experienced a lot. You know, it's not about arrogance or anything... you just have the choice in the situation if you want to be great or not. And I don't like to be somewhere in the middle. I decide to be great or not - I ask myself: what does the audience deserve? The audience deserves fantastic! And so you go on stage and say 'I am'!

How does it all work? You have a family, your garden, you play live more than you used to - how do you cope, recording a CD like 'Snapshots' amidst all of that? There's more work going into that then one thinks.
Sure... I have a lot of support, an unbelievable manager, who takes care of my life. I couldn't do it all without him, without Nick, one of my earliest friends. I couldn't do much without my husband either, who is there for me since 14 years, who keeps the family life together when I'm not there. The children also support me in their way. They make it easy on me, when I have to say goodbye to them, which is very hard for me... So I have a lot of support from some great people!

And are you able to keep up with the thing that you did so gladly between your Eighties career and now? I read that your garden looks as beautiful as ever this year, despite your travels. Is that really true?
Yes, yes, even better than before!

Once more: how does that happen?
Well, one says: 'When you want to have something done, ask people who are busy'. When the energy is flowing you can do many different things: many more different things, than when the energy stops. The energy comes from somewhere in the universe and all you have to do is open up. And I have great faith in that. It sounds a bit like a conspiracy - but the garden is fantastic! The vegetables and flowers are growing everywhere! And my husband has rediscovered gardening a bit for himself. He works in the garden together with me and he says if he doesn't go out into the garden with me, he wouldn't ever see me... (laughs) ... honest! When we are together we're usually planting potatoes! (laughs)

I read on Twitter how you exchange tips about the vegetables with Carol Decker, the front woman of the Eighties band T'pau. You even sent her photographs! When she answered that she was impressed, you replied: 'You should see my potatoes'. Sounds like you're really proud of them. At least as proud as you are of your new CD.
Oh yes, to see food grow, eating things out of your own garden, that's so rewarding. Wonderful!

You want to say you're just as proud of your results in the studio as those in the garden?
Almost. It's both essential in my life.

I found a three year old interview in the Belgian newspaper 'De Morgen', in which you say you're happy that the cameras are not so focused on your hair, your face and your lips as they were in the Eighties. How important is it, however, that people accept you are 50 and still do the work of a young pop star?
I'm not sure I ever thought about that much... I believe, when I thought about that a lot, or too much, I might never take to the stage again. But I don't worry about how old I am or how different I look from back then, when I was 21. I look after myself and I know I can still do it. I don't worry anymore about certain photographs where I might look less flattering. They worried me once, but they don't anymore. What's really important is the relationship I have with my audience when I'm performing. And I know they don't judge me for these optical things.

Was there a point in your career when you had doubts?
Yes sure, when I stopped in the Nineties! I even doubted whether I could ever sing 'Kids in America' again... I really felt I was done with it. But that was great, you know? I got married, had children, moved into gardening and steered clear from the pop world and everything connected to being Kim Wilde. It was a liberation, for a while... But after some time it all came knocking on my door again. And I recognised that Kim Wilde wasn't such a bad girl after all...

And meeting the German singer Nena also had some influence?
Yes, she made sure it all went very fast. I was so inspired by her energy, she can't be tamed. You can almost feel it, when you sit next to her. Often she is almost overwhelming, but she did encourage me, gave us a hit ("Anyplace, Anywhere, Anytime", 2003). And then I spent my energy on music again. Before then I completely invested it in the kids. I didn't have anything left at the time... 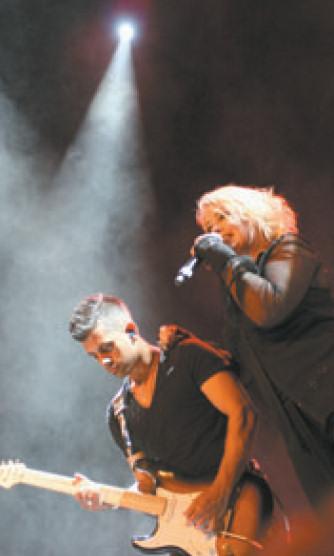 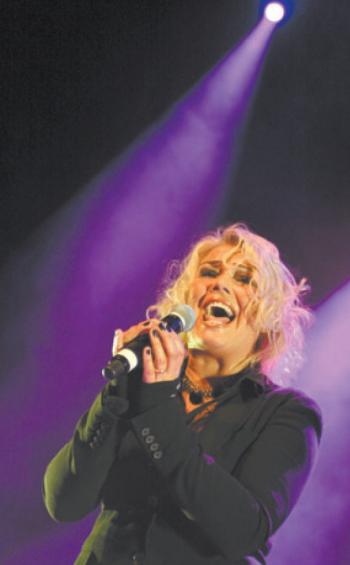