In these times somewhat austere, a peek into the retro-1980s often puts balm to the heart. And it would be wrong to deny it. But few artists who have reached through the ages safely to us. Still, the Englishwoman Kim Wilde is exemplary in this regard. Consecrated star from his first single Kids in America in 1981 she has a path strewn with stars. Thirty years later she is still there, with an eleventh album Come Out And Play refrains necessarily synth-pop, rock riffs to deliberate, and always this 'je ne sais quoi' that makes us melt. Meeting with an icon.

We have not seen you in France in recent years. We are delighted to see you again with this album ...
In fact, I perform live regularly everywhere, but it's true that I do not remember coming here a long time and I missed it. The fact that 'Come out and play this way is an excellent reason to return. But I have a long history with France and would like to continue. I really love to return to the public at La Cigale in Paris ...

It is true that you maintain a particular fairly compared with our neighboring Germanic?
It is indeed the case. Although I can not explain it elsewhere. It begins 'Kids in America' and it has never stopped me even when I have breaks in my career. The Germans have never ceased to be fans of my music, concerts to ask ... Germany has always been a country apart for me. Especially because, as English singer, I had no particular reason to get a star treatment. But from my side, I started to love this country differently over time. I still want to clarify that I always get an incredible reception from the public, or when I go to concerts. I tell myself it's like your first love, it is never forgotten, even when you grow up.

You even recorded a duet with a local celebrity, the rock singer Nena.
Yes. It was in 2003 with the title Irgendwie, Irgendwo, irgendwann (Anyplace, anywhere, anytime). I keep a very good memory from this collaboration! Somehow, I was certainly still closer to that audience.

With this new album, you return to your roots rock with great guitars. But still very melodic choruses that these were your success. Is a trademark?
We wanted to revert to its authentic 1980's so many groups today are trying to draw like The Killers or La Roux. Having started at that time I really wanted to find the atmosphere and I had a lot of legitimacy to this.

You get involved personally in writing songs?
Yes, of course, and this long, even though I love working with writers and musicians. The first songs were written in Stockholm with producers called Epicenter, like King of the World. Then I wrote some songs at home. I was really pleased to participate in all stages of the writing and production. It's been awhile since I had not been so involved. In all, it took us about six months to bring some thirty pieces for me and keep the thirteen that make up this album today. We really wanted to make the perfect pop, because nothing is more perfect than the pop music!

It's also why you always worked with a team actually quite family?
Yes. It seemed natural to work with Marty (his father, Ed), Ricky (his brother, Ed) when I started. I would not change and it brought me luck. Once again, Ricky wrote part of the tracks, manages my band, knows how to play almost all instruments - except the saxophone (laughs) - and also produces much of the album. I'm also making my own mark. My 13 year old son also played guitar on the album. It starts, but it is really very good. I love the electric guitar!

What do your children think of your career?
In fact, I did not overly exposed them to it all. And then the music was always there in my family, my rocker father and my mother Joyce (The Vernons Girls). My father is 71 years and he still performs concerts. He was on stage for over fifty years. My mother was in one of the first groups of girls. My brother Ricky is a fantastic composer and producer. and this gene was apparently sent in the line: my daughter Rose plays the piano and she sings beautifully. Now, I'm sure she will one day be on stage.

On the album, there are two duets with famous names of the Eighties. Would you like to tell us more about that?
In fact, we were not necessarily very close at the time. But the 2000s brought us closer, especially when we started touring with Spandau Ballet, Paul Young, Kid Creole And The Coconuts, Belinda Carlilse ... I really wanted to work with Nik Kershaw and Glenn Gregory (Heaven 17): their voices sound even better today than they did back then. We wrote and sang together 'Love conquers all' with Nik. I have collected his albums for years. It was incredibly exciting to work with another of my musical heroes. As for 'Greatest journey', we wrote it all, Ricky and me. We're both big fans of Glenn Gregory and we were overwhelmed with joy when he arrived at the studio to record the song with us. As another guest, I can give you also my former guitarist Perry ap Gwynedd, group Pendulum, who plays a divine rock solo on 'My wish is your command '.

Against all odds, your voice has not really changed thirty years later!
Thank you! I think it has even gained strength over time. But I'm not surprised that much anymore when I take for example the voice of my own father, who is 71 years, which is better what has never been! It's pretty amazing!

Your style is quite unique a mixture between rock guitars, synthesizers and pop choruses format. This is your guideline?
Yes. Since the beginning, it's like that. I've always worked with my brother Ricky who loves these guitars and synthetic sounds. His vision of the production is also a part of what I am musically. Of course, during these years, we tried various perspectives by changing the formula a bit, but ultimately that's what we like. And today many artists come back too! it is a balance between three elements, but when he succeeds, it sounds like something magical!

The first title is extracted 'Lights Down Low'. With his side immediately catchy, you opened the doors to new radio and television studios. What is the second title chosen?
It's 'Real life'. And for once, it's not a song written by me or my brother. I think this is one of the first times since I started a song I literally falls from the sky and makes me such an effect. When I heard the demo, I could not stop crying. It once again Epicenter who gave me this gift.

There is always talk of the return of year 1980. In recent months, we discover one after new albums OMD, Human League, Duran Duran. And you, what does that say to you?
You can't get rid of us! (Laughs) And we do not want to leave! (Laughs again) More seriously, I think people are now living a difficult period with the crisis and remember those years as a period a little crazy, or was more colorful, funny, even if they just forget the bad things that we also have to know. It is also nostalgia. The public has now grown up had not heavy-credit, or experienced a divorce ... Perhaps that these years were more full of new things. It's quite difficult to analyze such a phenomenon. But I think above all that there were some very good things, sounds that have influenced many artists of today as well, very different styles: the postpunk, new wave, the neo-romantic, rock FM. .. but also funk, soul ... It was also MTV generation with high-contrast images ...

What could be your next challenge now?
In fact, my career has been mainly a series of performance videos and television, but it is only lately that I really discovered myself as an artist scene. I felt new vibration, and a relationship with the public that I would like to develop further in the future. I never thought when I started at age 20, that when I had 50, I'd make a great tour! I did not find myself on stage with stars like Michael Jackson and David Bowie. So everything is still possible. And the example of my father shows me also, if necessary. I do not think about the future, I take each day as it comes.

What is your vision of music today?
I know everyone complains about piracy and other things, but when you think about it, it's great to see thanks to the Internet for new artists, new musical styles! I have never listened to so much music and been interested in new stuff as today. And I want to be part of that. We're still in a world undergoing change. I am very excited to know what will happen next. 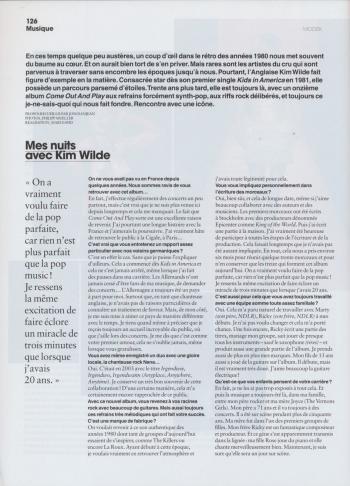 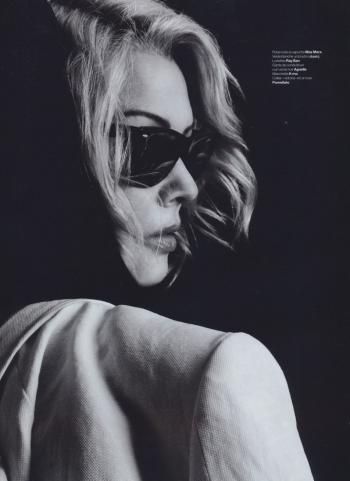 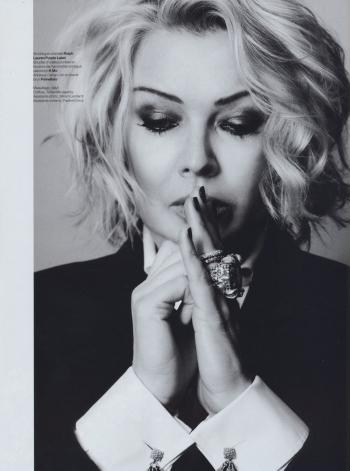 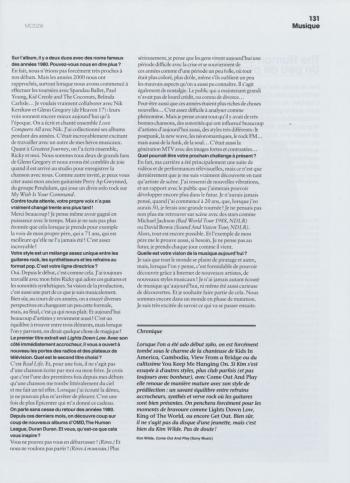