On June 18, 2011 Retropop has become a very successful event. Although there were some heavy rains, that could not spoil the fun of the 12,000 spectators. As of 12:30 the first people were waiting before the entrance eager to be allowed inside. At 13:00 the gates were opened and the audiences started to explore the terrain and go toward the stage.

There were many booths with food and drinks, there was plenty of choice and the price was all right. A Coke or a beer was only 1 coin, converted from € 2.20: for an event like this is very acceptable. If you wanted to fill your stomach with fries, that cost only 1 coin too, and a hamburger was only 2 coins. With prices like these and the selection of artists what would appear, the organization can certainly look back on a successful event.

The kick off was given by Kim Wilde, who sang both old and new hits. It seemed to go wrong when she fell on stage but fortunately she is a real artist and said that she had a sore knee, but she continued unabated.
After Kim Wilde it was time for The Orchestra, sometimes better known as ELO. The old goats with their gray hair played as if they were still in their teens. The audience loved the show and the wonderful mood on this wet day became even better.
After the Orchestra had played their hits such as 'Turn to stone', 'Living Thing', 'Mr. Blue Sky' and many others, The Wild Romance continued. The Wild Romance for the elderly better known as the band that was used by legendary rock singer Herman Brood. They played some old hits from Herman Brood which was highly appreciated by the audience. After the break it was time to Henk and Henk, better known as Het Goede Doel. Once again the older people showed they were up for it for a few more years. The audience could enjoy their hit singles such as 'België', 'Sinterklaas', 'Vriendschap' and many others.

The happiness of this day was really that most of the rain fell just as the performances were over. This allowed to stay during breaks in the two remaining tents. In one tent were two of Radio DJs doing their disco music could be good at dancing and the second several band appeared to entertain the audience. In this tent, these included: Holden, Crystal Dreams, The Doors in Concert, Bruce Band, COPS and One Step Behind.
In short, the public had no dull moment between concerts.

Meanwhile it was already dark and there were two more concerts to go including the highlight of the evening, Anouk. Paul Carrack was the kickoff at 21:30. Paul Carrack has collaborated with great artists such as Sting, Rod Stewart, The Eagles, Phil Collins and many others. His unique voice makes it sound special. He had hits with 'I Need You', 'When you walk into the room', 'Don't shed a tear' and 'Dedicated', all songs that the audience were listening to during his performance.

After his performance most visitors had a quick snack and a drink and they tried the best possible place to get to the last show of this fantastic day, Anouk. Young and old were ready, the light show began and there she stood on stage Anouk. She sang well known songs such as 'Nobody's Wife', 'Girl', 'Lost', 'Sacrifice' and many others. The audience danced in all directions.

But, as always, there is an end to everything. Anouk's last words were 'fortunately there was no rain'. She had better not said this because after these words the rain came pouring down again. Many could begin their long journey home, the roads around the festival were all filled up and we had to wait for one small hole to get out of there. For many, this is a Retropop to remember, good atmosphere, good organization, in short, awesome, thanks Retropop. 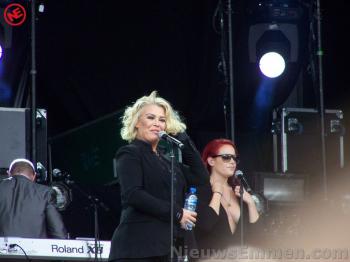