Vocalist and friend of the band Glenn Gregory was recruited soon after, with the trio unleashing Heaven 17's first single "(We Don't Need This) Fascist Groove Thang" and album Penthouse And Pavement in the months that followed. Around the same time Marsh and Ware released another album under their B.E.F banner entitiled Music of Quality & Distinction Volume One featuring a host of guest artistes, including shoeless 60s icon Sandie Shaw, soul diva Tina Turner and family favourite Gary Glitter!

The trio's sophomore release The Luxury Gap gave the band their biggest hit to date, in the shape of "Temptation", with the track reaching number two in 1983, followed by an additional pair of singles also reaching the top 20. Although Heaven 17 have released numerous albums since the early 80s they're mostly recognised for their first two collections, with both titles fondly remembered and critically acclaimed.

Gregory and Ware took their debut album Penthouse And Pavement on the road in 2010 to celebrate its 30th anniversary (Marsh having left the band a few years earlier), with the shows a great success, leading to the pair deciding to perform their second album live for the very first time as part of a two night stint at London's Roundhouse, with second evening dedicated to B.E.F's Music of Quality & Distinction albums.

I've been a fan of the band since hearing "Groove Thang"'s pulsing beat on the floor of Edinburgh's Nite Club whilst in my teens around the time of the song's release and was lucky enough to view the pair playing a handful of songs at Rewind Scotland earlier this year. Impressed by what I caught, I couldn't pass up the opportunity to photograph the latest event.

Heaven 17 opened their Friday night set with "Crushed by the Wheels of Industry", followed by "Who'll Stop the Rain". I assumed that the band were performing the songs in their album running order so was excited to be in the photo pit for our three song allocation as my fave H17 song was due next - "Let Me Go". It's a song I really love and if it's not in my top ten it's certainly somewhere in my top 20 songs of all time, so it was a joy to hear it live and was certainly the evening's highlight for me.

The rest of the album's run through didn't disappoint either, with a top class "Temptation" completely bowling over the excitable audience alongside a passionate take on "Come Live With Me", with Glenn telling the crowd that it was probably his favourite H17 song to sing.

The tracks that weren't singles also came across well, including "Lady Ice and Mr Hex" which made its live debut on the Roundhouse stage, sounding as if the duo had been playing it for years. The exhilarating 149BPM "We Live So Fast" was also a crowd pleaser, with Glenn's cries for "Hands in the air!" taken to heart. Mind you, a knackered Glenn did say after the song ended that if he knew he'd still be singing it 30 years later he would have made it a ballad!

The run through of The Luxury Gap ended with album closer "The Best Kept Secret" but it was obvious that the collection's run time was way too short for a full gig. Heck, it wouldn't even fill up one side of a C90! Luckily the band had a few more tricks up their sleeve, delivering a few more treats to their expectant crowd, including "You've Lost That Loving Feeling" as covered by Human League, with another League oldie "The Black Hit of Space" following.

H17's first album was represented by renditions of "Groove Thang", "Penthouse and Pavement" and set closer "We're Going to Live for a Very Long Time". The duo were certainly focusing on the earlier side of their work during the Roundhouse show as "And That's No Lie" from 1984's How Men Are was the only track performed that was released after the evening's featured album.

The first night's celebrations ended with a two song encore featuring a blistering run through the League's "Being Boiled" followed by a mammoth extended reprisal of "Tempation", throwing snatches of Donna Summer "I Feel Love" into the mix and highlighting the tremendous vocal talents of Billie Godfrey, finishing the evening with a bang.

Although Friday night's festivities were enormous fun it was Saturday's set that I had been looking forward to the most as the evening promised a host of special guests playing alongside the H17 boys.

British Electric Foundation released a second Music of Quality and Distinction album in 1991, with a third 'Dark' take on the series due soon and the band had gathered several of the singers that had performed under the B.E.F banner for their Roundhouse show but it was ex-Ultravox frontman Midge Ure who took to the stage first, covering Bowie's "Secret Life of Arabia" and replacing the late Billy MacKenzie for "It's Over", dodging shouts for "Vienna" between songs!

Blonde bombshell Kim Wilde was up next for a trio of tracks starting with "There's a Ghost in my House", followed by Stevie Wonder's "Every Time I see You I Go Wild" from the new B.E.F album and Supremes classic "You Keep Me Hanging On" - a hit for Kim back in 1986.

Scritti Polliti singer Green Gartside brought the pace down a bit after Kim, wrapping his golden voice around The Sonics "Didn't I Blow Your Mind This Time" and "I Don't Know Why I Love You", another song from Mr Wonder and featured on the second B.E.F album.

The middle section of the show shone the spotlight on a few singers that I believe appear on the 'Dark' collection, including Polly Scattergood with "The Look of Love", David J Roch performing Bill Withers "The Same Love That Made Me Laugh" and ex-Long Blondes front woman Kate Jackson, who turned Blondie's "Picture This" into a dramatic ballad and produced one of the night's highlights in the shape of Bowie's "Boys Keep Swinging", dueting with Glenn Gregory.

Heaven 17's female vocalists also had their chance to shine mid set as Billie Godfrey delivered her spin on Bronski Beat's "Smalltown Boy" and replacing Tina Turner for "Ball of Confusion", with Kelly Barnes offering up Tina Marie's "Co-Pilot the Pilot", with Glenn praising the singer saying she had the best voice he's heard in his life for a twenty year old.

The final third of the set was the real icing on the cake for me, as although there were two real 'Stars' closing the proceedings I was also extremely happy to see Noisettes singer Shingai Shoniwa take to the stage as she's always a joy to shoot and I love her voice so couldn't fault her takes on "A Change is Going to Come" and "God Only Knows".

After Shingai it was time for Sandie! Still dancing barefoot after all the years, Miss Shaw pulled on the crowd's heartstrings with "Anyone Who Had a Heart" and livened things up with a rocking Gladys Knight cover - "Walk in my Shoes".

The final guest of the evening was 80s icon Boy George. When George announced he was going to sing a Lou Reed song I thought it may have been "Perfect Day" as Glenn recorded it for the first B.E.F album but it was a song called "Make Up" from Transformer. It's a bit of a downbeat track so there was a lot more fun to be had during George's second offering, a joyous romp through "These Boots are Made for Walking".

The final song of the night was B.E.F's version of the Elvis standard "Suspicious Minds". Gang leader Gary Glitter originally recorded the track for the original Music of Quality and Distinction album but there was little chance of the shamed glam rocker showing up even though Martyn had teased on a couple of occasions that "GG" would be appearing and George had told the crowd that he'd originally seen the League supporting Mr Glitter, even waiting around for the singer's autograph, stating it was still in his possession, though he didn't think it would be worth much!

In the end GG did appear, in the form of Glenn Gregory, leading the band through a very glam sounding version, with Martyn, Glenn and the rest of the band taking a bow on the song's completion.

Of course the audience were having none of it and wanted the pair back for one more song and were eventually awarded with "Tempation"'s third outing over the weekend, with Glenn and Martyn joined by George, Sandie and Green, making the run through a real one off that produced huge smiles on both B.E.F. members faces throughout the performance, with the song a perfect way to complete a great pair of shows. 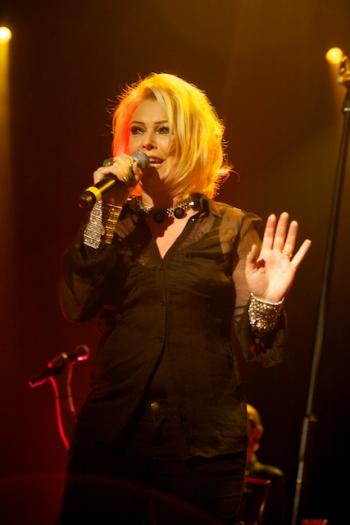 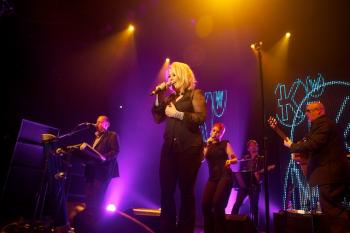