So wonderful... It was a wonderful time

Pop: Kim Wilde has appeared in the Alte Oper Frankfurt - passionate indulgence in the hits of the 1980s

Collective moist eyes already dominate the start: a majority in the nearly sold-out Frankfurt's Alte Oper get tears of emotion welling in their eyes when they saw the idol. Not because the British cunningly disguised her excess pounds by skin-tight clothing in the color black. Certainly not!

Instead, lurking in the background quietly the melancholy of their own, long forgotten youth. For many, it was thirty years ago when Kim Wilde hung in their rooms. In a minority again, the wet flows from the eyes with rage. Because they were late: who could even imagine that suddenly the opening band does not come and Miss Wilde suddenly appears half an hour early with her detailed nostalgia show? She looks cute for her 50 years, Kimberly Smith, known to the world by the pseudonym of Kim Wilde. She didn't have to make up the stage name herself, as she was the daughter of British youth icon Marty Wilde, who twisted in the rock and roll era in tandem with Cliff Richard, Billy Fury and Adam Faith. Pleasantly of course is the buxom Kim on stage when between stunningly timeless hits such as "Chequered Love," "View From A Bridge" and "Cambodia", chatting nicely with the audience, shaking outstretched hands and otherwise pretending as if she appeared in between doing housework and tending to the children.

A true entertainer is acting differently. But the fan base of Kim-clones that have become older, gay couples with a critical eye, blessed by the yearning and notorious past onlookers who simply want to check how much Kim has not gone to pieces. She is accompanied by an imposing formation that sounds a little too loud and overdriven for the venerable old opera: a competent sextet. Kajagoogoo bassist Nick Beggs presents himself as an adventurously dressed in cylinder, skull skirt and biker boots. Required to Kim's side is brother Ricky, who accompanied her from the beginning as guitarist, composer and producer, and appeared as a passable glam-rock idol for kids as a teenager. Also from the family is Rick's daughter Scarlett Wilde who supports her aunt as a harmony singer and the high, always a little fragile voice delivers Kim's foundation.
Almost virtuosic an acoustic set device with lounging on stage stairway musicians: "Love Blonde" Jazz Swing sprayed in the style of Django Reinhardt, the Tasmin Archer cover "Sleeping Satellites" sounds simply brilliant and the ode to the dog "Jessica" by Kim accompanied solo on the electric piano, once again underlines her skills.

Sexy and various extracts from the current work "Come Out And Play": "King Of The World," "Lights Down Low" and "Get Out" fit seamlessly and perform flawlessly on the object to give the album a sale boost once more. But the spirits of the past lure back Kim Wilde time after time. Be it when her hit 'You Came', Nenas 'Irgendwie irgendwo irgendwann' in English or digging up Alphaville's "Forever Young" - the Eighties are always present, as if the past century, not the fifties, sixties and seventies have been the relevant decades as far as rock and pop are concerned.
For the passionate finale Kim Wilde served then those Evergreen, who once catapulted a 20-year-old in 1981 out of nowhere to the top of the charts: "Kids In America" - and in the auditorium blinking even imaginary, the alarm systems of reality, though the room lights address and the beautiful dream of: Who turned the clock, is it really so late? 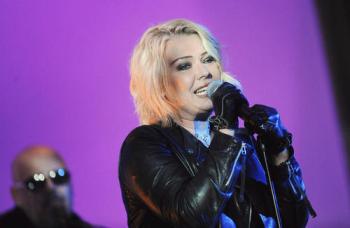