Sun, songs and silliness... Rewind Festival had the lot

Massive hair, outlandish costumes, garish dayglo underwear, silver suits, thousands of tanked up, happy people, a 92-year-old fan, a cross-dressing wedding couple and even a successful marriage proposal — the 80s Rewind Festival at Scone Palace had it all.

Spectacular sunshine greeted the crowd on Saturday, which included a myriad of Supermen, Wonderwomen, Adam Ants, new romantics, frilly dresses, silly Y-fronts, one-piece lycra suits and rollerblades (a man) and a ubiquitous Ozzy Osborne, to pay homage to the decade of dubious taste. Despite Sunday's cloudier conditions, and even a spot of rain after Nik Kershaw sang I Won't Let The Sun Go Down On Me, it failed to dampen the spirits with the costumes still out in force.

Any hangovers from Saturday were blown away by some more great sing-along moments as act upon act proved they could still put on a show to be proud of. Hit after hit came from 25 acts from the 1980s who set out to prove it definitely was not the decade music forgot. The audience agreed, with 20,000 people over the weekend loving the sounds of the Human League, ABC, Kim Wilde, Heaven 17, Billy Ocean, Toyah Wilcox, Nik Kershaw, Imagination, China Crisis, The Real Thing and Scots heroes The Bluebells, Hue & Cry and Perth's own Fiction Factory.

Audrey Parkin Milne from Dundee was there for the full weekend with her husband Grant. "It's been fantastic, I've loved every minute. Billy Ocean was fantastic on Saturday and Imagination were brilliant, but Hue and Cry were the best, they were amazing."

Karen Thomson (38), from Perth, was there with her friends Tammy and Caroline from work. "This has been fantastic, it's brilliant for Perth and we've been singing all weekend," she said. "I had a wee tear in my eye when Fiction Factory came on, they were great. I hope they do this again next year."

One of the biggest cheers of the weekend was for the local lads, who reunited especially for the festival after 27 years. The emotional standing ovation was nearly three decades in the making for Fiction Factory, which came after hit single Feels Like Heaven finished off their three-song set. Lead singer Kevin Paterson brushed off the early nerves and pointed out his back garden to the audience before dedicating the show to friends in the crowd. Afterwards he said he really enjoyed their first performance together since disbanding back in 1984. "It felt amazing, I don't think we got a response like that at the time we were together," he said. "I wish I could thank the crowd individually, we had lots of friends in the crowd and it was great."

Compere for the weekend, former Altered Images singer and actress Clare Grogan, even threw in an off-the-cuff performance of their hit Happy Birthday with the house band to round off a "fantastic weekend" for the Gregory's Girl star. "We didn't plan it at all," a breathless Clare said minutes after her slot. "I told the producer I was really struggling not singing so he let me do it. I've had a fantastic weekend and the audience have been really brilliant. I think it's nostalgia, I think it's like Friends Reunited mixed with your favourite all-time edition of Top of the Pops. We all just get to be 18 again, we don't take it too seriously although everybody takes the music seriously."

During one of the breaks Clare introduced a fan from the audience called Norman who had an announcement. Grabbing the mic, he popped the question to his girlfriend of five months, Vicky Leadingham. Word quickly came back from the crowd that the answer was yes, leaving a delighted Norman to skip happily back to celebrate with his new bride-to-be.

Ms Grogan also took time out to praise a 92-year-old called Frank for being the oldest music fan in the audience. Toyah Wilcox strode off with the most extravagant outfit of the weekend, telling the audience her sideways multi-coloured Mohican took 20 bottles of hairspray and a lot of fake hair, and her looks 20 years of plastic surgery.

Festival organiser David Heartfield said the weekend was a "good platform" to build on, praising the venue and said he hoped to bring Rewind back again next year. "It's been great, we've been really lucky with the weather," he said. "I think it's been a great start to the festival, hopefully it will be back next year. There are one or two things to sort out, but hopefully I'll be in a position to announce something soon. The location is beautiful, you've got the palace on one side and the river on the other. The acts have all enjoyed it, they're having fun and some of them have been having a holiday while they're up here. Martin Fry is heading up to climb Ben Nevis, he's a keen hillwalker so he's taking the chance while he's up here."

Kim Wilde played all her old hits before Human League finished off the festival with a superb set which included the classic, Don't You Want Me Baby, followed by a spectacular fireworks display. 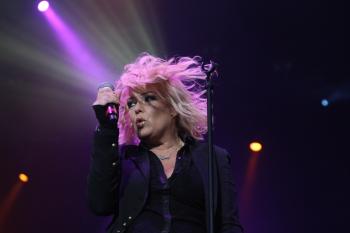