She has just turned 51 and has a long career as a pop idol behind her. Now she’s back in the music business again after a long break from the stage. A break where she became an educated gardener, got married, had children, hosted TV shows and wrote a couple of books.

Kim Wilde welcomes us in the record company’s premises, wearing black clothes, green nail polish and lip gloss lips. She looks confusingly much like the young, hot, pouting blond girl , she was when she was in the charts in the beginning of the 1980’s, with the hit “Kids in America”. Kim Wilde is in Copenhagen to promote her new album, which contains 14 covers from different artists and decades. Songs she’s fond of herself.

'It’s kinda like a birthday present to myself. When I turned 50 last year I thought I deserved to record others songs. The idea originally came about due to the last few years concerts, where I sung some of these songs, and the audience welcomed it very well.'

At the age of 20 she became an international pop star. At 30 she moved out of London and into an old barn in the country. Six years later she met her husband, the actor and singer Hal Fowler. They married on September 1, 1996, and has since become parents to Harry Tristan and Rose Elisabeth, 14 and 12.

Kim’s parents always encouraged her and her siblings to do whatever they really wanted to do. And then become No. 1 in the league. She has since won awards for both her music and later her gardening. 'There were no limits, we could do whatever we imagined. That is what I tell my children too. That’s one of the greatest gifts you can give to them, in my opinion.'

Through the last many years, Kim Wilde has accepted to perform at festivals with 80’s music, but it wasn’t until last year a new album, with only new songs, saw the light of day. And now “Snapshots” that has just been released. But why return to the pop industry now?

'I was in the business from I was 20 to 36 years old, and by the time I stopped I thought I would never sing a song again. I did 8 shows a week for some time, and I just couldn’t take it anymore. Then I met my husband and thought: Okay let’s start a new chapter. It was a relief, a bit scary, but mostly a relief. I had Hal to hold my hand. Within a few years I got my children and turned my back to the music. And it was really great. I didn’t miss it at all. I loved to raise my children, went to college and learned about gardening. I was Mrs. Fowler and not Ms. Wilde.'

In 1996 Kim Wilde appeared in the rock opera “Tommy” by The Who. Here she met the colleague Hal Fowler, and knew instantly that this was the man of her life, and she wouldn’t settle for anything less than Mr. Right. ' My parents met when they were very young, got married and had me and Ricky. We grow up with their love story. They said: You know when you’ve met the right person. And that was exactly what happened to me. I do not know if this is the truth, or you just believe it because you’ve heard it from your parents. And then make it the truth. Nevertheless, we met and got married within 6 months, and that was the right thing to do for us. No doubts at all. For me he was the right person to go through life with. And so we have for 15 years now.

Kim Wilde and Hal Fowler became parents very fast, and she says that it made her a whole person.

'It was the missing piece in the puzzle. I felt something was missing until I had all of them in my life. I do not necessarily mean you can not become a whole person without children, but for me it was what was missing.'

When Kim Wilde went through pregnancy for the first time, she discovered the interest of gardening. She took an education as gardener, on Capel Manor College, an one hour drive from her home. 'Since I was 20 my schedule had been very tight with travels, records, videos, year after year. Now suddenly I had all the time in the world. I didn’t need to catch any planes. I didn’t need to be Kim Wilde. I didn’t need to make a record. I didn’t need to do anything but grow my baby inside of me and live my life. It was nice to suddenly have an empty calendar. My garden was also empty, there was nothing in it. So I decided to learn what to do with a garden. I have always been a person who wants to learn how to do things properly. So I decided to study gardening. It changed my life. Some people see the light through a religious experience. For me the moment of revelation appeared sitting in a class room discussing flowers.'

When Kim Wilde ended the class she got a job as a gardening designer on two TV show about gardening. In 2005 she won a Gold medal at the prestiguos annual international garden show, Royal Horticultural Society’s Chelsea Flower Show. Also in 2005 she released the book “Gardening with children” and the year after she released yet another book on gardening. The latter is still not released in Danish.

'I made a garden for my children. A funny place that is beautiful, with fruits and vegetables, flowers and animals. Like the Garden of Eden. I can’t imagine Adam end Eve running around naked in a more beautiful garden than mine. I also have lots of red delicious, juicy apples. I am really glad I took this education. I recommend it to everyone who is tired of their situation. Go back to school, learn something new. Follow your passion and do what you love. It is worth a try.'

The road back to music went through the old Kim Wilde hits. In the beginning she didn’t want to go back to that life again.

'I was contacted by the promotor of this 80’s revial concerts, who wanted me in the show. I thought about it for a long time. The 80’s were cool back then, but not now. Forget it!'

After a few years and after listening to some of her own favourite 80‘s bands, at the shows, she decided to accept after all. She was insecure if she could live up to the expectations. It became a big experience to stand in front of an audience again and she got great reviews, and was overwhelmed by the positive reception. 'It was the big step back to music business I had left', she says. It is hard to imagine Kim Wilde as Ms. Fowler in overalls, wellies and gardening gloves. She did go through a physical transformation before she went back to the public again as Kim Wilde.

'The first thing I did when I transformed from housewife to a performer again, was to go get my hair done. I became a blonde again, something I actually really really wanted. I tried to go back to the more natural hair colour, when I became pregnant. I thought it wasn’t safe to dye my hair while being pregnant. Then I got lazy. I didn’t find the time while running after the children to go get my hair done. When I finally did it, I remember I left the hair salon and thought: I feel fantastic! This I should have done years ago. Kim Wilde was beginning to crave me back and it was actually a nice feeling. It felt good. It was a chance to honor who I once was. I also experienced on stage that even though people remembered me as younger, they enjoyed the fact that I had become older as well. And bigger. And wiser. And a mother. I felt that the audience said to me: We have all become older, Kim. It gave a familial feeling, a feeling of companionship. It was great. It helped me perform better, my voice got stronger and I got more confident on stage.'

Our time with Kim Wilde is almost up. Now it is time for some photo shoots and Kim Wilde wants to go freshen up her make-up. We just have time for one more question. What can we expect to see from you in the future? More TV programmes? Books? More music?

'I don’t know. I have an open mind. I’ve passed 50 and I am interested in seeing what is around the next corner. I haven’t seen it yet. So I will continue enjoying every day. I have a huge challenge in front of me, with two children who will soon become teenagers. There will be some fights to be fought. I will try and keep my feet on the ground and my mind healthy, to be able to handle what lies ahead of me. Wait and see. Maybe I just want to run towards the sunset and enjoy my menopause.' 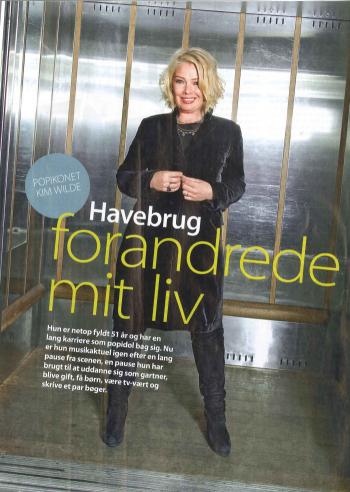 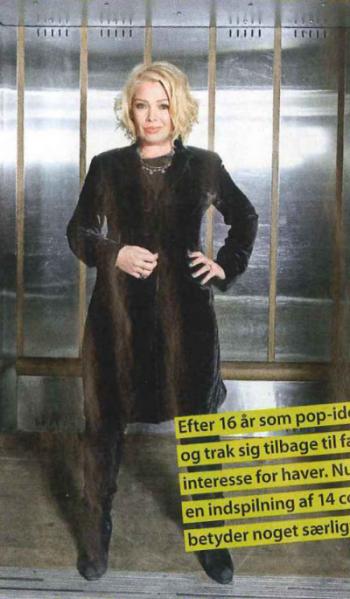 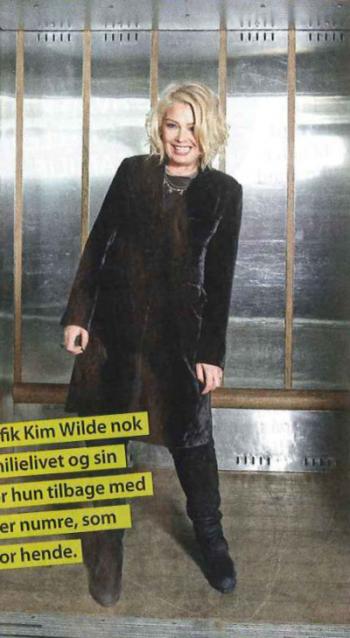 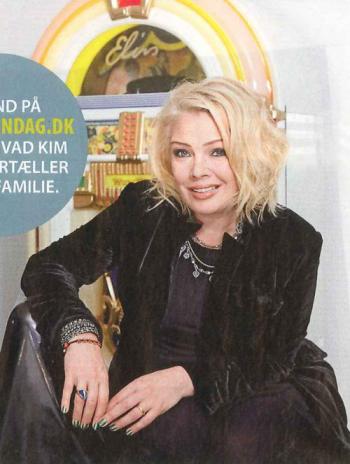 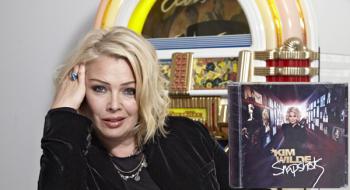