Through the back door into the pop business

The British pop icon Kim Wilde pulls out from the everyday routine, up to the stage.

Kim Wilde is a threefold success - as a pop star, mother and teacher. At nearly 50 years, the pop icon of the 1980s wants to know it again. In Plusz interview she talks about the advantages and disadvantages of the life as a musician, to escape into family life and the sudden desire to get back into the limelight.

How does it feel to be back in the pop business?
I really enjoy it I have to say. And besides, I'm so much more successful than I imagined. I am now 30 years in business. In Dresden, the concert I celebrated my 50th ever Birthday before.

Have you missed a lot of music during their free time?
I started a family and made other things, but I didn't really miss the pop business. Always being on the way to go on tour, living from the suitcase - on the contrary, it was wonderful to suddenly stop doing all that. I really thought then that was it for me, the end, and that I would never again be on stage and sing 'Kids in America'.

How did the change of heart come about?
I did Eighties revival tours, which I also enjoyed very much. I think this was the beginning of a new beginning. The audience was always still there, particularly in the United Kingdom. Shortly thereafter, Nena asked me if I wanted to record the song "Irgendwie, irgendwo, irgendwann" in English with her - "Anyplace, Anywhere, Anytime". I said yes and then was different for me all at once. I think it was going back to work with professionals, which has opened my eyes. Nena and I are still good friends. It has helped me to change my life, I owe a lot to her.

What is it like, singing your old hits before large audiences again?
Good. For there the audience give me back very much. I enjoy to sing again. The songs sound still fresh to me and are still popular. It's been a great feeling, to sing my own songs in front of so many people, especially for a 50-year-old woman like me.

With Michael Jackson, who sang in 1989 in front of 100,000 people? Is this your record?
Instead it was one of the smaller concerts at the time. In some places it was almost 200,000. And the "Bad" tour in 1988, we were faced with some two million people at the end of the tour. In retrospect, this is just unbelievable.

What were the benefits of having a normal life away from the stage to perform?
That was fantastic, especially of course for my children. It was wonderful to focus on peace in my pregnancies. Then there was also a very busy time for me. I started my interest in horticulture. For this I again hit the books and hosted a gardening show on British television. All this has been very stressful, almost like a roller coaster ride that I took a lot of energy - two children, career, school, there was much to reconcile. When I was back in the music business, I've noticed that I needed a break from all that.

During the TV show - were there people who encouraged you to go back into the music business?
There were many people believed that I would do it again soon and could not understand why I took so much time to myself. It was a very valuable time for me. I've learned I know it very well myself. Gradually I realized that I love life without glamor and glory. Later, when the music came back into my life, it was not because my life needed it so much, but it came very natural to dismiss the appeal. Now I can do several things at the same time: gardening, family and music.

Whence came the inspiration for a new album?
With my fellow musicians I've tried to absorb the atmosphere of the earlier albums and refresh with the current music. So I just started writing, together with other talented songwriters. The music was then very quickly. All this penned-up ideas suddenly wanted out, it was wonderful. And it rocks, also just because I have so much live experience.

What does the future hold? More albums by Kim Wilde?
Sure, I'll add more albums. But first there is so much to do. The tour in February and March is coming up. And I come to the beautiful Dresden. Although I have not spent as much time there, I have seen how beautiful the city is, and would therefore like to celebrate my birthday there.

What are the chances of young musicians who want to create all the top? Do you see differences from the 1980s?
I like a lot of female musicians today, such as Lady Gaga. She knows how to combine musical talent with the times and to create a breathtaking show. There are a lot of talent out there at the time and inspiring women. I myself have loved pop music as a child and do it even now.

Will it still more difficult to establish oneself as a young artist in the music industry?
Yes, absolutely. The music industry relies on short-term success. But the public is not stupid. It can distinguish good performers from the bad ones. Through the internet there is now a much greater access to new music. To what extent can they be encouraged for individuals is questionable. However, it is easy to see the negative in this development. I think it is - precisely because of these new developments - a very exciting time for the music industry. Because the audience is still there. One should never underestimate that. 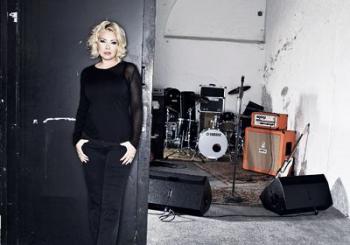