"It was a little dream, a super dream, we were able to experience," said Cornelia and Wilfried Goetz from Erfurt after their Traumrock weekend. They were among the TLZ-winners who were able to experience the mega-spectacle of oldies in the Erfurter Messehalle as VIP guests, courtesy of TLZ and Zeitungsgruppe Thüringen.

Erfurt. Even before the event on Saturday evening they were transported by a stretch limousine and spoiled together with other dream-rock pairs during a journey around the state capital. Sunday the couple was still "out of it" after the "wonderful impressions" during the backstage tour of the exhibition hall and the Erfurt Theater and the personal encounter with the East German "Rock Lady" Petra Zieger.

The powerful woman, a native of Erfurt "Puffbohne", opened - as it has been tradition for some years - the oldies shows and fantastic rock fireworks with crowd favorites of the beat, pop and rock scene with their hit single "Traumzeit angesagt". Of course in the current dream-rock version. After the rousing opener, in which the Rock Lady drove in on a Harley.

The Brit Daniel Boone had to work had as a soloist on the stage to keep the audience smiling, as except for "Beautiful Sunday" he sang little-known titles. By contrast, the "Drifters" performed real "ear worms" with the stately orchestral and their decades-old favorites such as "Under The Boardwalk" or "Save The Last Dance For Me" and were rewarded with a standing ovation. The performers from England offered with some super hits an inspiring musical journey through time, in the course was no lack of soul.

Emphasis was still on Britain with the "Hollies", which aroused memories of old times and beat their top hits such as "Bus Stop," "Carrie Anne" or "He Ain't Heavy, He's My Brother", and lastly "The Air That I Breathe" which they had the audience sing. There was some extra applause for the brilliant guitarist Tony Hicks, who put his craft to the test on sitar and banjo.

The hall was brought right to the boil by Kim Wilde, who surprised everyone with her partly sung in German version of Nena's hit "Anyplace anywhere anytime" and then let it crack with some of her top hits such as "Kids of America" and the Supremes classic "You Keep Me Hangin' On", "Forever Young" by Alphaville and "Enjoy The Silence" by Depeche Mode. The super pop star even received a short birthday song from the audience, as the singer and mother of two became 51 years old yesterday. The Briton, who with backing singer Scarlett Wilde her niece in her band, once again proved that she can tie her comeback as one of the most successful female artists of the island effortlessly to her heyday in the eighties.

And then it was to sing to Peter Schilling, the brilliant finale of the fantastic rock-night. "Major Tom" lifted off "Completely free", performed one of his hymns "Terra Titanic", but also brought the pensive ballad about "Kevin", in which the topic of child abuse is addressed. While fans celebrated the audience favorite in the exhibit hall, some TLZ-readers were allowed to "meet and greet" after midnight to confront Peter Schilling still with very personal questions and compliments.

And the fans learned form the popstar that he had drawn a line under the "Neue Deutsche Welle", but also that he is working alongside music by now on his third book. He had a "fantastic job", the famous native of Stuttgart, and specifically thanked his fans for their loyalty.

With the meeting with Peter Schilling the beautiful rock-night was not over yet, because in the full hall 2 of the Erfurter Messe, there were the "ReBeatles", who had also done the "Warm-Up" before the opener, an after-show party in the musical footsteps of the Liverpool mop tops until well into the small hours. And on the way home to thousands oldie fans have dealt with the question of what audience favorites will be invited to Traumrock 2012 ... 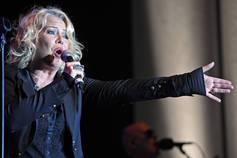