Whatever happened to... Kim Wilde

After a string of hits in the 1980s, including Kids in America and You keep me hangin' on, Kim Wilde embarked on a new career in horticulture in 2000, which led to presenting work on Garden Invaders and Better Gardens. She has since returned to singing and performs regularly on the 1980s revival circuit. Kim, who turns 51 on Friday, is married to musical theatre performer Hal Fowler, 43. They have two children, Harry, 13, and Rose, 11, and live near Knebworth in Hertfordshire.

"I was always singing as a child. My dad is Marty Wilde, who was a successful recording artist himself, and my mum is Joyce Baker, one of the Vernons Girls. I dreamed of becoming a singer, but I was pretty realistic about my chances and I went to art college. But then Mickie Most signed up my brother Ricky to RAK records. I got to meet Mickie, too, who then signed me up!

"I knew I had landed on my feet, so I just grabbed the opportunity and went for it. I had dyed my hair and was having fun with my image. The striped jumper I wore on the video for 'Kids in America', my first hit, I bought from a jumble sale.

"The next few years were a whirlwind of tours and recording. In 1988 I supported Michael Jackson's BAD tour - oddly, I didn't really speak to him until seven weeks into the tour when we had to do a photo shoot.

"I remember reading the script for Tommy, the Pete Townshend musical, in 1995 at my kitchen table in Hertfordshire and thinking, "This is going to change my life". Pete invited me to audition for the part of Mrs Walker, and I got it, joined the show, and within six months met my husband Hal, and got married.

"I then stopped work and focused on having a family. I became interested in gardening, took myself to Capel Manor Horticultural College to study the subject properly, and then landed on my feet again by getting into TV. My gardening career culminated in me getting a gold award at the Chelsea Flower Show in 2005. But at the same time, I had been doing a bit of performing, and joined the 80s revival circuit.

"I've also been recording and performing in Germany and mainland Europe. Luckily, I have a strong fanbase. Who knows what I will do next? I just know I have been very lucky so far and it had been a bit of a fairytale, becoming a popstar and a gardening guru." 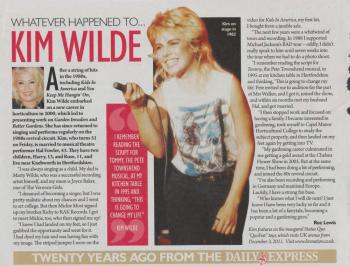