Singer-songwriter Kim Wilde, 53, sold 20 million copies of hits such as Kids In America and Cambodia. She is married with two children.

Everyone associates you with drunkenly singing Christmas songs on the Tube, now, since last year’s YouTube hit, don’t they?
Yes they do. And I applaud the generosity of the people that allowed me to be absolutely ratted on a train, drunkenly singing. It was very sweet the way the public reacted to it. That was the most heart-warming and overwhelming Christmas present I could ever have.

It was hilarious.
Of course, there were those who were totally appalled, disgusted and embarrassed by it but, overwhelmingly, people rather liked it. It was one of the reasons I thought if ever there was a time to get this Christmas album out, it’s now. I’ve always wanted to make one so I thought, now, 30 years after my career began, I could be forgiven for indulging myself.

Are you a Christmassy person?
I’ve always loved Christmas and loved buying Christmas albums. I really enjoyed Michael Bublé’s one. Actually, I love anything that just gives into romance at Christmas: you can really indulge in those sentiments without feeling too bad about it. You should never feel bad about it.

A lot of people think of Christmas records as naff, don’t they?
I don’t know about that really, do they? I love Mariah Carey singing Christmas songs. I mean, I’ve never thought Christmas songs were naff, never. I don’t know, I’m just a sentimental old fool.

Have you ever had a bad Christmas?
You know what? I don’t think I have.

You also sang Kids In America on that Tube train. Do you think there’s ever going to be an age limit on singing that?
I did think that. That’s when I got out of the music business, when I was 36 and I got married to my husband. I thought I’d never sing Kids In America again. Several years after, when the babies were growing up a bit more, I got reeled into doing a charity event and they asked us: ‘How about doing Kids In America?’ I said: ‘Oh, you are joking!’ But was kind of like: ‘Oh I’m not going to argue,’ and it brought the house down!

You kind of got things ready for Madonna, didn’t you?
I was just before Madonna and I held reign for a very short while and then she came around and stole my crown. And I’ve never recovered it [laughs]. I had ambitions about meeting my soulmate and having children. Even when we had a No.1 in the US, I had no inclination to go over there and go for it and say: ‘Yeah, yeah, yeah. That’s me and I’m going to have another one and take over!’ It just wasn’t what I wanted to do.

How old are your kids now?
My daughter’s 13 and my son is 15. He’s in a band called Blighty Inc and plays an amazing electric guitar. They dream of being a great rock band, which they’re fast becoming. Our daughter Rose is a singer-songwriter.

Your dad, Marty, was a big pop star back in the day, wasn’t he? How was that, growing up?
I used to notice all the mums would giggle when my dad was around but growing up with him was so normal. We didn’t have these rock’n’roll parties, he wasn’t passing the dutchie on the left hand side and drinking like a drain; he was just a good old dad at home, strumming the guitar, writing us lullabies. And he made lovely little stories for us and he used to put them on a reel-to-reel and he’d speed them up so he was talking like a chipmunk.

How is it for you as a mum seeing your kids going into the industry?
This industry is one of the most successful the country has going for it now. It’s not like when my dad started and it was like: ‘Get yourself a proper job!’

You were sexy but not Miley Cyrus sexual. How do you feel when you look at that?
It doesn’t do it for me but I can’t be appalled or flabbergasted. There were really overtly sexy girls around when I was growing up and I didn’t want to be them. I was listening to Lou Reed records when I was 13 and all he ever sung about was taking drugs and it didn’t ever make me want to do that. I’m not sure I buy into that whole role-model thing.

What about if your daughter started to go in a Miley direction?
If she felt it was how she wanted to express herself, I’d be there 100 per cent. I’d be a hypocrite if I said anything different. You’ve got to be true to yourself. Even if you screw up, at least you’ve screwed up on your own terms and maybe you’ll learn something. Says a wise old Kim.

The album Wilde Winter Songbook is out now. 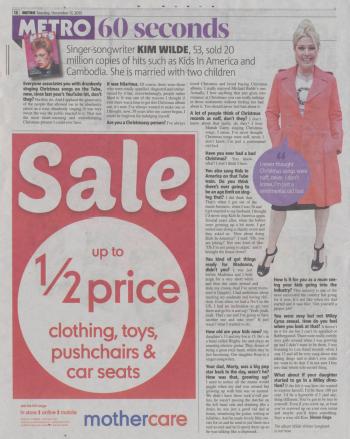 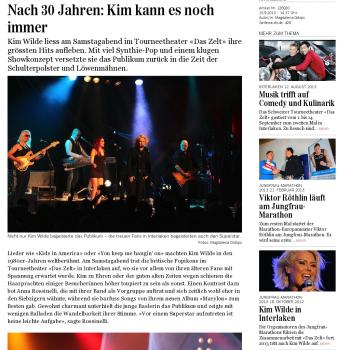