Born Crain gets a recording contract in Great Britain out of his recent duet with Kim Wilde. "A nice beginning, but surely not a breakthrough yet", says the blonde singer/pianist, who first got noticed in the TV programme 'Idool' in 2004.

For Superstars, the second single from his most recent album Identity, Born recently got eighties icon Kim Wilde to sing with him. That duet gets an unexpected follow-up. "This collaboration opens doors in Great Britain", says manager Jo Langela. "The woman who represents Kim Wilde over there also works with big names like Muse, Coldplay and Snow Patrol. She introduced Born to record companies as a 'modern day Billy Joel'. Universal believed in the potential of Identity on the British market and is now offering him a recording contract.

In February the first single by Born Crain will be released across the Channel, followed by the album Identity in May. "That doesn't mean I made my big breakthrough in Great Britain", Born says. "I think it's great that there's any interest to begin with. The chance that I will be a hit over there is very slim. The British are rather chauvinistic. And rightfully so, because they almost invented pop music. Without the right partners a Belgian won't achieve anything. My collaboration with Kim Wilde has opened the door slightly. Now that Universal supports my album, we can lay a foundation. Everything depends on how the British radio stations and the audience react. I know how difficult it is to get on Belgian radio. In England there are ten times as many records released each week."

The album Identity will also be released in Germany and Japan, where Born has already sold almost 100.000 records. "That opens doors of big markets like Germany and England", says manager Jo Langela. "In Japan Born did a morning show for six million people watching. His songs have made it into karaoke bars. In Tokyo we heard his "Walking in the sun' on the radio. Born was signed by the biggest record company, Avex. They even consider releasing a 'best of' album of his music."

"Since I make music in English, it would be stupid to stay in Flanders alone", says Born. "Since 'Walking in the sun' reached number 2 in Japan, I can tour halls that hold 400 to 500 people over there. Nice for a Belgian, but it's peanuts in a country of 128 million."

"After living in New York for a year, where I've played bars and clubs, I'd like to be on Flemish stages this summer", says Born. His daughter Brooklyn is bound to be there too.

Hot in Japan, not at home

Born Crain is not a big star in his own country. His most recent album peaked a tnumber 142. Superstars, with Kim Wilde, didn't make the top 50. His real hits are from 2006 and 2007, when Don't ever go (title song of Aspe) and Foolsh rush in reached number 5 and 10 respectively. In 2012 the album Born in the USA, a project for Q-music, reached number 2 in the iTunes Top 100. Born also reached the playlists of Q, MNM and Radio 2 with 13 consecutive singles. "My songs are illegaly downloaded more than they are sold. That is frustrating. That's why I also work as a sound engineer and producer in my studio, I make music for commercials and write for others, also in Korea and Japan. I am not dependent on my own career alone." 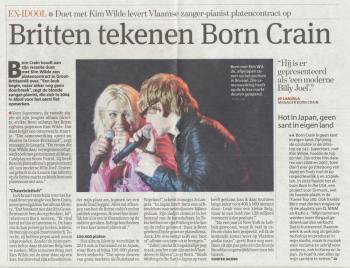