If you were one of the two million people who viewed Kim Wilde's drunken festive video on YouTube last year, you won't need reminding that the Eighties chart-topper likes to celebrate Christmas in style.The video showed Kim and her brother, Ricky, singing a spirited version of her best-known hit, Kids In America, on the train home from a Christmas party.

Within hours, the film had gone viral and suddenly she was splashed across newspapers and news channels across the world. The 53-year-old singer, who plays Bristol next week, says that although she was initially mortified about the film going public, she can laugh about it now and the whole episode has turned into a massive positive.

"No woman, whether famous or not, wants to see herself worse for wear," laughs Kim. "Not many people can carry it off, but somehow, amazingly, I seem to have done that.

"The response was very heartwarming, overwhelmingly positive and people mention it to me now as much as they used to mention the fact I went on tour with Michael Jackson.

"We've just made a new video for the single Rockin' Around The Christmas Tree, which is a bit of a piss-take of that You Tube video with me wearing my antlers. Nik Kershaw has joined me on it and it was really good fun. We decided to seize the moment and go for it."

The new single is taken off Kim's latest release, Wilde Winter Songbook, her first new album in the UK for over a decade. Wilde Winter Songbook is a mix of new songs and classic Yuletide tunes and features several duets including Winter Wonderland with Rick Astley, Burn Gold with her husband, actor Hal Fowler, and White Winter Hymnal with father Marty Wilde and brother Ricky.

"It's very much a family affair and I wanted the album to truly reflect my Christmas and what it means to me. We were brought up on a traditional family Christmas with turkey on the table and the relatives coming around. It was all about watching Morecambe and Wise and the Christmas Top of the Pops."

Kim has been a star since her first hit, Kids In America, in 1981. The single was a worldwide hit and paved the way for a recording career, which has brought sales of 10 million albums and 20 million singles.

Her single successes included Chequered Love, Water On Glass, Cambodia and You Keep Me Hangin' On, which reached number two in the UK and number one in the US. After her Eighties heyday, Kim took a break from singing to become a gardener and radio presenter, as well as raise her two children, but she says she's happy to be back writing new material and performing despite initial concerns about being linked to the 80s revival.

"The Eighties stuff makes sense to me now but I had a bit of an issue with it when the revival started. At the time, I had taken a big step out of the music business and basically retired myself to do gardening and have two kids. Going back wasn't on my list of things to do but then I got talked into doing the Here & Now 80s tours because bands like the Human League, Altered Images and ABC were involved. I can enjoy the Eighties more now because I'm writing and recording new songs. Having a foot in the past is made more bearable by having the other foot firmly in the present."

The new album coincides with her first solo live dates since 1986 and she's joined on her three Christmas shows by Bristol-born singer Nik Kershaw, who enjoyed similar success in the Eighties with singles such as Wouldn't It Be Good and I Won't Let The Sun Go Down on Me.

For Kim, it marks a return to Bristol, the city where she kicked off her first-ever tour in 1982.

"I played my first gig in Bristol and it was filmed for a TV documentary called First Time Out, which centred on me playing at the Colston Hall so it will be quite emotional for me to be coming back to the city where, in many ways, it all began." 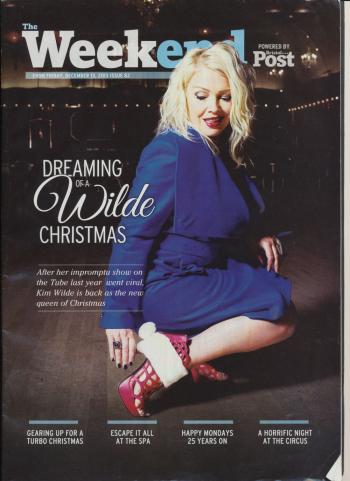 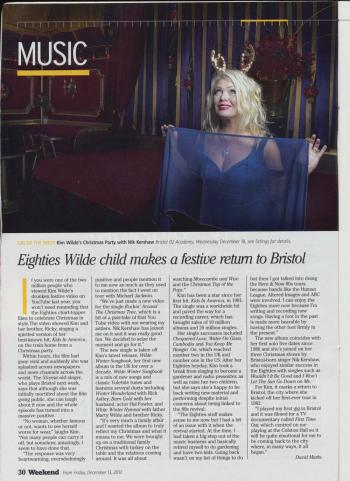