We go gliding with music legend and gardener Kim Wilde, 53, and chat Christmas plans and how it feels to be a YouTube sensation.

Where: The Tower of London Ice Rink

So, Kim, what with music and gardening, you've had a varied career...
I know! In 1995, I started to think seriously about getting out of the music industry. I'd sold millions of albums, had No. 1s and toured the world, but I was getting bored. I started gardening as a hobby and did a horticultural course. Then I wrote a few books about it and did some TV work, but over the past few years I've been gigging and recording in Europe, too.

How did that brilliant Christmas video come about last year? (Kim and her brother Rick, 52, were filmed drunkenly performing Kids in America and Rockin' Around The Christmas Tree to a packed train. The video has over 2 million views on YouTube.)
We'd spent the evening at Magic FM's Christmas party where we'd been drinking these delicious lychee vodka cocktails. They were lethal, but we didn't know that until it was too late. At about 11pm we got the train home, full of Christmas spirit.

Quite literally...
Yes! And I thought: "Why don't we get up and sing some songs for a laugh?" By the time I realised someone was filming, there was no going back. I thought the most the girl would do is take it home and show it to her mum. Little did I know the whole world would see me absolutely larruped on a train!

Were you embarrassed by it?
At first I was completely mortified. I thought that I had buried what was left of my career in this country, but the public were great about it, and most of them were laughing with me, rather than at me!

Boozy parties aside, do you enjoy Christmas?
I love everything about the festive season. I used to love it as a child, and now I love it as a mother [Kim has two children with her husband Hal Fowler, 45 - Harry, 15, and Rose, 13). Hal does all he cooking on Christmas Day and I lay the table and get drinks for all the guests.

Why did you decide that now was the right time for your UK comeback, with a tour and the release of a new album?
I'd been listening to Christmas by Michael Bublé, along with a few others, and I wanted to put my hat in the ring because I'm so passionate about Christmas. The good momentum from the viral train video made me get on with it!

Do you still get recognised a lot?
My daughter notices people looking at me when we're out shopping. I don't notice it so much, but that's probably just because my eyes aren't very good any more! 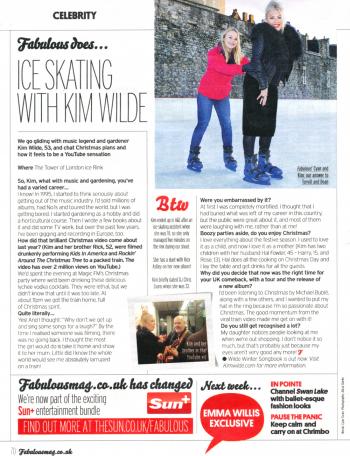