With multicoloured fairy lights twinkling around a vintage dresser and a gilded reindeer hanging on the wall, Christmas has come early for singer Kim Wilde - but then, she does have two reasons to celebrate.

"i've always been a huge fan of Christmas", she tells Hello! in an exclusive interview and photoshoot at her stunning family home, a 16th-century converted barn in Hertfordshire. "This year I will be raising my glass to an achievement I've been waiting for all my life - the release of my first Christmas album. I'm also about to embark on my first solo tour of the UK in 25 years."

Kim's yuletide-themed CD, Wilde Winter Songbook, includes well-loved songs such as Winter Wonderland, Have Yourself a Merry Little Christmas and Rockin' Around the Christmas Tree - a number with special resonance for Kim. It's a family affair, featuring original ballads co-written with her brother Ricky, festive duets with her dad Marty and husband Hal Fowler and backing vocals from their 13-year-old daughter Rose. Friends and fellow stars from the 1980s Rick Astley and Nik Kershaw also add their vocal talents.
"The best Christmas present I could wish for is that I'm spending it with my family", says Kim, 53, who also has son Harry, 15, with Hal, her calssical actor husband of 17 years. "My other wish is for my album to find its way into the hearts of the nation."

It has been three decades since the former rock chick stormed the charts. With her brooding pout, spiky blonde hair and a personality full of attitude, the 21-year-old daughter of '50s rock 'n' roll star Marty burst onto the scene with Kids in America. Success followed swiftly and Kim clocked up more than 30 singles and 12 albums, as well as tours with Michael Jackson and David Bowie.

She moved into her beautiful  500-year-old home on her 30th birthday. "I turned my back on my wild London lifestyle", says Kim. "the endless travelling, parties and nightclubsdidn't suit me any more. I wanted a quiet life and to be close to my parents. The first time I walked into my house, the serenity hit me. Looking out at the sun ising over the fields was incredible."

Marriage and motherhood saw Kim kiss the music industry goodbye and swap her tight leather trousers for a floral gardening smock. Her blonde hair returned to its natural colour and she settled down in the leafy Home Counties.

"As far as I was concerned, my pop career was over", she says. "I was ready to discard my past. Now I'm ready to embrace it again."
That said, Kim has no intention of replicating her wild-child image. These days, the singer is more reminiscent of a screen siren, with platinum blonde locks and red lipstick,a look that has proved a big hit with the scores of fans old and new who flock to festivals all over the world for her revival tours alongside such stars of the '80s as ABC, Heaven 17 and The Human League.

"These concerts are amazing and have boosted my confidence no end", she says. "I was a wife and mum, had piled on a bit of weight and lived out in the sticks. I felt my pop star days were in the past. But after I'd lost a few pounds, I felt I could take it on. From that moment, I was back in the saddle."
"It's had a wonderful effect on my confidence", she adds. "Singing works the muscles in my face, which helps me look younger."

The final nudge to create her Christmas album came in an unexpected way. Kim presents a Sunday afternoon radio show on Magic FM and was on the train home from the station's Christmas party last year when she and her brother Ricky began entertaining their fellow passengers with Kids in America and Rockin' Around The Christmas Tree - the song that she recorded with Mel Smith in 1987 to raise funds for Comic Relief.
"We were very merry and I was wearing these shiny reindeer antlers", she recalls with a giggle, pointing to the festive headwear that now sits above the mantlepiece. "Another passenger recorded me and it ended up on YouTube, with hundreds of thousands of hits overnight. When I found out, I swung between absolute horror and finding it hilarious. I thought, 'This is either going to crucify my career or have the opposite effect'. Fortunately, it was the latter.  "It become part of why I wrote the Christmas album. I'm a big believer in timing and the time was right."
After trains, Kim progressed to breaking a Guinness World Record by singing at 43,000 ft in March in a British Airways Boeing 767, along with Spandau Ballet's Tony Hadley, Bananarama and Go West. It was the highest gig in history, performed in aid of Comic Relief.

"I seem to have an affinity with public transport", she laughs. "Our favourite family film is Trains, Planes and Automobiles - and that's about Christmas, too."

Kim also credits her friend and fellow singer Tracey Thorn of Everything but the Girl for inspiring her to make a festive album. "We go back a long way", says Kim. "Tracey was giving birth to her twins in the next room at the hospital when I had Harry. I was listening to her Christmas CD Tinsel and Lights and was so moved by how gorgeous it was that I started writing my own songs. It was like opening the floodgates."
Kim's first song, One, was prompted by the memories of Christmases past. "Like every family, we have our rituals and traditions", she says. "Ever since Hal and I got married, we've planted our own Christmas trees, so each year we all walk down the field to choose one. The great thing about this house is that we have such high ceilings that we can bring back a very tall tree. Putting it up is a labour of love. As the scent of the Nordic spruce fills the house, Hal places it in position and I arrange the lights. But it can't go up until we've places the gold star on top. Then we decorate it together."

Holding up a pink fairy from atray of baubles that will adorn their tree, Kim says: "I bought this for Rose when she was little." She picks up more: "This shiny gold chimpanzee was Harry's and the white polar bear came from a Christmas market in Germany. Even our dog Jess has her own ornament. And I made this red painted heart from salt dough for Hal."

The couple met in 1996, wen they were starring together in the West End musical Tommy. "He was the man I'd been waiting for", says Kim, holding Hal's hand. "Laughter is so important to me - I grew up with a hilarious dad - and Hal has a wicked sense of humour."
Hal, 46, who has performed in Les Miserables, Aspects of Love, Martin Guerre and is currently starring in The Light Princess, recalls how he knew immediately that Kim was the woman he wanted to spend the rest of his life with.

"I come from a classical background and had little idea about her pop career", he says. "But we just clicked. We're both from solid family backgrounds and have the same values. What clinched it for me was her impressive knowledge of plants", adds Hal with a chuckle. "When she told me the Latin name for a clover - Trifolium repens purpurea - I was bowled over. There come a point when it was all or nothing: we had to tie the knot or I couldn't see her again."

They married in September 1996, six months after they met, and immediately began planning a family, with Harry arriving in January 1998. It was while Kim was pregnant  with him that a new creative passion came over her. "I was overcome by a powerful force to garden", she recalls. "Perhaps it was a Mother Earth instinct, but I wanted to get back to the soil and get my hands in it. I wanted to grow fruit and vegetables for my family, to make an organic garden for my children."

With Hal's encouragement, Kim took a two-year course at horticultural college. It led to her winning a gold medal at the 2005 Chelsea Flower Show and being asked to present Channel 4's Better Gardens and BBC1's Garden Invaders.

Her love of plants is on show during our shoot, as she arranges a bunch of flame-red berries, aromatic clove oranges and sparkly dried flowers in a vase to make a festive table centrepiece. Watching her, it's clear she relishes Christmas and the opportunity of spending it at home with her loved ones.

"We watch while everyone opens their presents in front of the fire", she says. "I'm obsessed with ribbons and hover to collect them to recycle."
"Hal cooks Christmas dinner", she adds. "In all the years that we've been married, I've never cooked a single one. He's such a good cook that he'll help my mum prepare lunch for nine of us on Christmas Day this year."

No doubt Kim's Christmas album will be playing during the preparations. "I thought I'd never sing Rockin' Around The Christmas Tree again", she says. "Now look at me - I'm more confident than I was at 21 and am having fun. I wish I could go back and tell the younger me not to worry about her future because it's all worked out brilliantly. Every morning I wake up thinking how lucky I am." 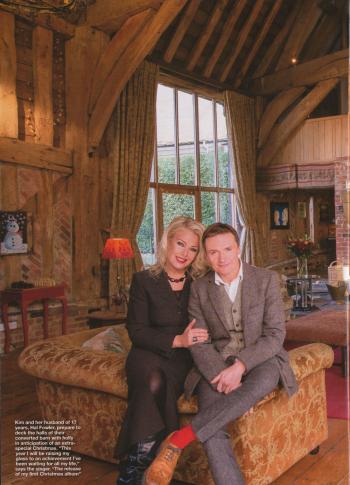 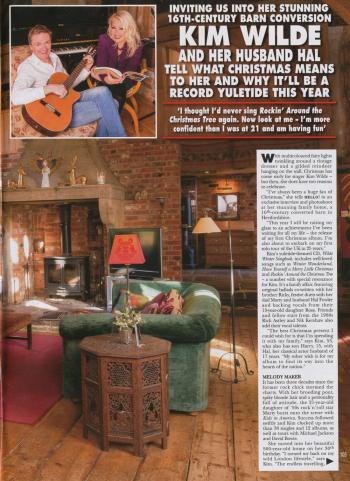 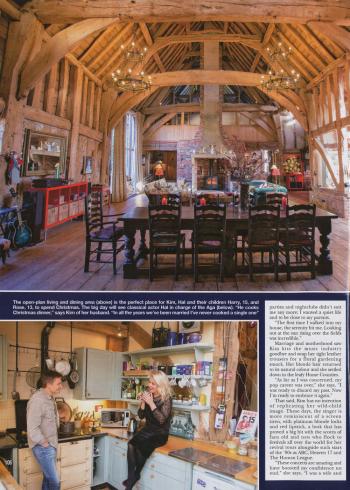 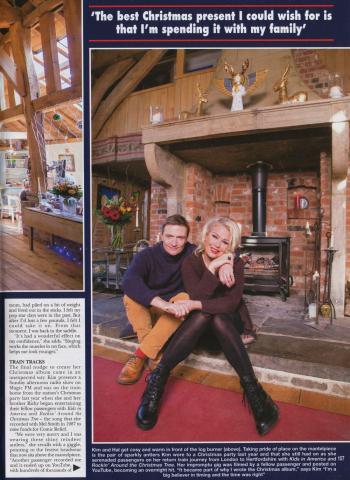 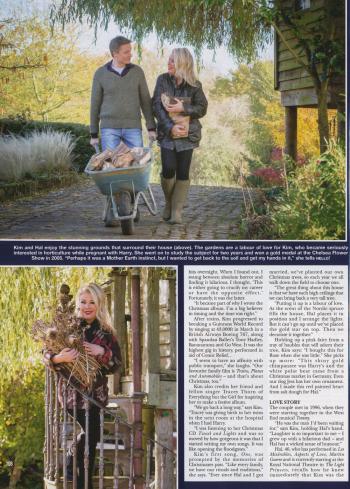 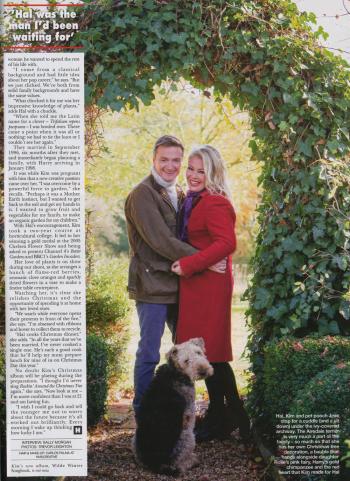