Kim «born to be Wilde»

The English singer now has a pied-a-terre in the Perigord. She will appear on stage for a concert in Talence. Meet Kim Wilde.

With her electric pop songs, energetic and sexy, she made many teenagers panic, jumping around on "Kids in America" in the early 1980s. The Lady Kim Wilde was then 20 years and sounded like a possible competitor of the New Yorker Debbie "Blondie" Harry. At that point Laurent Voulzy has devoted one of his most famous ballads ("The Nights without Kim Wilde ', in 1985).

After quickly succeeded concerts and hits ("Cambodia", "View From a Bridge", "Chequered Love", "Love Blonde" ...), Kim Wilde seemed to lose the thread of her career. Faithful to the same group as her brother, the composer and lead guitarist Ricky Wilde, Kim left the music business in 1995 to devote herself to horticulture. With great success: her books on the subject have been bestsellers and she has even put his name in the Guinness Book of Records after the successful transplantation of the largest tree ever attempted.

Back to music ten years later with the aptly named "Never Say Never", she now lives between his native England and the small village of Saint-Marcel-du-Périgord, 20 km from Bergerac. On May 31, it will give a unique concert in Talence, near Bordeaux. We meet.

You disappeared from radar in France, while your singing career went on well in Germany ...
Kim Wilde. In fact, the last ten years, I'm under contract with the German branch of Sony Music. In 2002, I recorded "Anyplace, Anywhere, Anytime", a duet with German singer Nena ("99 Luftballons"), which, to both our surprise, became a hit. It was a real hit there, but also in Switzerland, Holland and Austria. This song has revived my career beyond my expectations.

It's funny seeing my popularity relaunch there rather than in my own country. Even in England the 1980s are back in fashion. This is something really important way there, as in a lot of European countries elsewhere. Full of young people like the look and sound of that decade, and their parent take a nostalgic trip quite cheerful. So, I participated in numerous revival concerts these years. It's very nice, very nice.

How have you experienced the 1990s, after the success of the previous decade?
For years, we had all the time in background, constantly on tour ... So when I got married, I decided to retire from show business to raise a family. It was a lifestyle choice and I am very happy. I was very young when the success came. Here, for the first time, I was going to have time for me to think about what I want to do more than just be Kim Wilde.
I wanted my children to grow up in a house with a beautiful garden, something I myself had dreamed as a child. And there was no question to ask a gardener to do for me: old arts student, I have always loved creating, so I wanted to realize myself that dream garden. So I enrolled in college to learn horticulture. It was a revelation: I am fully dedicated to the point of making my new job. This passion has not left me, even if I exercised more professionally since I decided to return to the music.

This concert in Bordeaux, this is an attempt to comeback?
No, I'm not saying that. I just do it for fun. When I proposed it, the idea excited me. I have a special relationship with the French public. And I really love France, the tranquility of the countryside, cooking ... I count all soon settle full time in our house next to Bergerac. This is a barn we remodelled ourselves, and I am eager to take up residence there for good.

What will you sing for this concert?
All the songs that people know and a few times. I recorded a whole album of standards, a few years ago. We'll play the best. "You Keep me Hanging On" by Diana Ross & The Supremes, but also "To France" by Mike Oldfield and Maggie Reilly. I am currently working on a disc of Christmas songs, a project that is close to my heart. But, of course, we'll play none, this is not the season!
We will be on stage at seven. The group includes my brother, daughter Scarlett Wilde, a bassist, a drummer and a keyboard player... It will be very rock, very lively. This is a fairly noisy concert, not the kind where you sit to relax comfortably, no, it will move!

What mark do you leave in the English pop music?
Oh! I do not know. Sometimes I hear a singer that I could have inspired. But it is not often. Frankly, I'm fine (laughs). See an old doll like me still sing with energy and passion, while having a family life and other interests, maybe it can talk to young artists. I do not know. The art of living is certainly one I do best. And that, I'm happy. 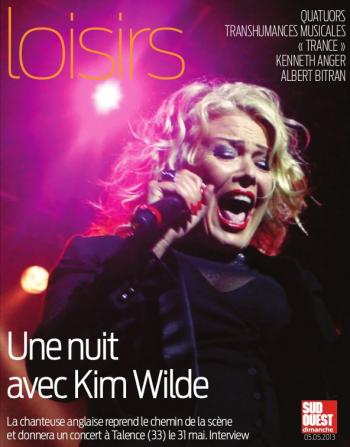 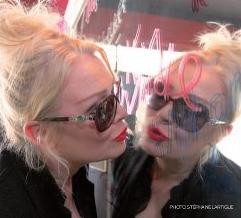 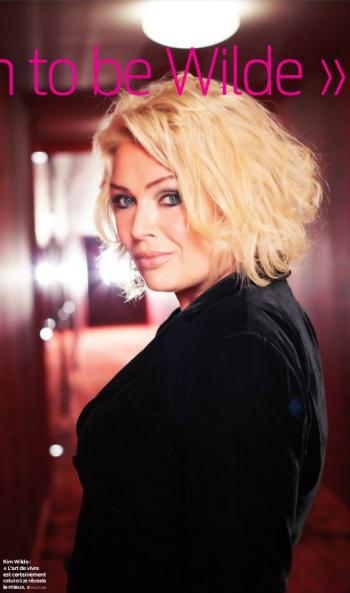