Spring fest in Paderborn will be a hot event. And that's all independent of the weather, because none other than rock icon Kim Wilde will appear on stage at the Rathaus on May 4, to perform her biggest hits. Paderborn am Sonntag spoke exclusively with the "West End" girl from London.

Since your first hit 'Kids in America' from 1981 you haven't left the music scene. What is your relationship with Germany and the fans here?
I have very loyal fans in Germany. They grew up with me and we have all changed together.

You haven't changed at all, though...
(laughs) Sure I have. It's not a bad thing, that's how things go, I don't shy away from that.

You like working in the garden too. It has become one of your biggest hobby's. Is that still true?
Sure. We have a very big garden and before I sang with Nena in 2003, I put all my energy into it. When the weather is good, like it is right now in London, it's very joyful.

When your manager secured the date in Paderborn, what did you think? Had you ever heard the name of our city?
To be honest, no I hadn't. Is Paderborn known for anything special?

Well, Paderborn is a church centre, has a rich history and is a sports metropole, and also offers an airline connection to your hometown. Will you have time to visit the town?
Sounds interesting, but I'm afraid that I will only stay one night and fly back on Sunday morning, so I can't do a lot of sightseeing.

Flying has put you in the Guinness book of records recently. Can you tell us something about that?
That's right. It was a stunt for Red Nose Day, for charity. Together with my good friend Tony Hadley (Spandau Ballet) we played a set. It was 13.000 feet up and so it was the "highest" concert ever. It was a lot of fun. My brother was there, playing guitar and the passengers really enjoyed it. Some rows were taken out of the plane and so we had enough space to rock.

The Eighties were very special for you. Was it a meaningful time in the history of music?
Definitely so for me. Those were fantastic times. Friendships were formed during that time. We were all in our twenties and full of energy.

You are planning a new album, right?
That's true, I'm currently writing. At the moment I'm recording a Christmas album, and I'm also doing a project with Heaven 17.

What advice would you have for a young artist who hasn't been discovered yet? How would he get noticed?
I believe YouTube is a good way, to make songs accessible to a large audience. But it's still true that you have to play live as much as possible. My 15 year old song is doing this. He is getting wellknown in the area with his band, and has experienced a lot of popularity on YouTube.

I have to come back to your passion for gardening one more time. I just had an idea. Would you plant a flowerpot for us in Paderborn, so we can auction it for a children's hospice service?
Sure. I'm always there for charity.

Kim Wilde will work on the floral artwork in cooperation with the Raffeisenmarkt Paderborn and Paderborn am Sonntag. Those who would like to have the pot, send your bid to info@pdams.de. The bids are accepted until May 6, noon. The highest bid wins. Read more in our next edition. 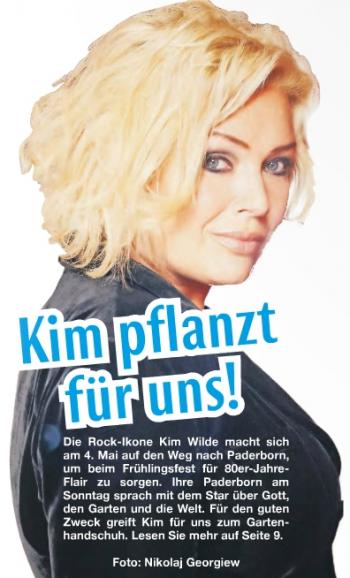 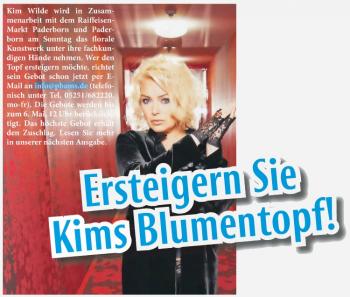