Kim Wilde to play Chrissy Amphlett's I Touch Myself on tour

Kim Wilde is performing a tribute to the late Chrissy Amphlett as part of her Australian tour.

Wilde is covering the Divinyl's hit I Touch Myself as a nod to Amphlett's passing earlier this year. "I love that song, I heard what happened to Chrissy, she's the same age as me, I wanted to do it as a special tribute to her for Australia," Wilde says.

Wilde is touring on a double bill with fellow UK pop star Nik Kershaw, a show featuring an array of their hits including Kids in America, Wouldn't It Be Good, You Keep Me Hanging On, If I Can't Have You, The Riddle, I Won't Let The Sun Go Down On Me and You Came.

They duet on a cover of Pink's recent hit Try. "It's a really good synthesis of Nik and I," Wilde says. "It really works."

The partnership will continue with Kershaw singing with Wilde on her new Christmas album Wilde Winter Songbook, which also includes a duet with Rick Astley. "It's been a labour of love, half Christmas songs, half new songs," Wilde says.

Both acts continue to make new music, but don't shy away from giving fans the hits in concert. "Because we're doing new stuff we can embrace the past far more easily," Wilde says. "It's easier to look back when you're also moving forward."

"You don't want to be defined by what you did 30 years ago," Kershaw added. "But it doesn't matter, they're great songs, we're not ashamed of them and people love to share them with us. But at the same time we're still creating new things, what's the point otherwise?"

Kim Wilde and Nik Kershaw play the Chelsea Heights Hotel tonight, the Palais in Melbourne tomorrow, the Enmore in Sydney on Saturday and the Astor Theatre in Perth on Sunday. 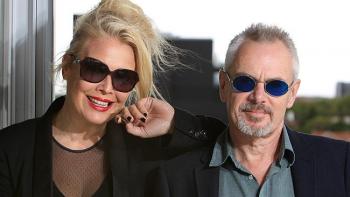