“I wanted to know if you were up for a bit of dancing now – I know it’s a bit tight out there with bodies and antlers and everything, but hey, there’s no excuse…”  Words in-between songs by 80s New Wave pop icon Kim Wilde at “Kim Wilde’s Christmas Party” at O2 Shepherd’s Bush Empire in London, England on Friday night.   Given that these four special shows (one in the Netherlands and three in England) were her first solo gigs in some time, I really had no idea what to expect.  And since she just came out with her Wilde Winter Songbook of Christmas songs, I thought perhaps the whole show would be dedicated to maybe an hour or so of holiday music.  I really couldn’t have been more wrong, as she ended up doing a mix of pop music (including covers) as well as Christmas music, with a sprawling setlist clocking in at two dozen songs, with a two hour performance.   At 53, she still looks stunning and sounds amazing, and it truly had a party-like atmosphere, and among other talented musicians, she was joined on stage by her niece, brother, and father, so it was a real intimate family affair.  All in all, a brilliant show, and I feel very fortunate to have had an opportunity to be there for it.

As I was visiting England, I had never attended a show at the O2 Shepherd’s Bush Empire before – great little venue.  The stage was nice and low, and it featured a multi-level general admission standing floor with tiered seated balcony above.

There was a huge line outside in the cold when I arrived, and by all accounts, the show appeared to be a sell out, as there was hardly room to get around inside.

It was a nice mix of ages in the crowd, and I couldn’t really put my finger on what Kim Wilde’s audience profile was – she seems to have very broad appeal.

Opening for Kim Wilde was Nik Kershaw, an English singer-songwriter and a pioneer in New Wave in the 80s in his own right.

His first single as a solo artist, “I Won’t Let the Sun Go Down on Me”, debuted in 1983, and he found a hit the following year as well with “Wouldn’t It Be Good”, which was huge in the UK and all over Europe.  The video for the latter also received a lot of play on MTV in the U.S.

He has been fairly prolific in music, with eight studio albums, half of those following the 80s and the latest, Ei8ht, which came out just last year.

Given the photography policies of the venue, I shot the first two songs of Kershaw’s set from the security pit, but was not able to return to see the rest of his portion of the show, so unfortunately can’t comment on it too much for the purposes of this article.

Below are some photos of Nik Kershaw performing on stage.

Kim Wilde has had a fascinating career in and out of music.

The English pop star had a huge and influential hit in 1981 with “Kids in America”, which has become a New Wave staple. The song was co-written by Kim’s brother, Ricky Wilde, and her dad (50s/60s rock and roll star) Marty Wilde, both of whom performed with Kim on Friday night.

She is equally known around the world for her cover of The Supremes’ “You Keep Me Hangin’ On”, which was released in 1987.

I have read that Kim Wilde was not very active in doing live tours, which is surprising, as judging from her concert this weekend, she is a natural.

She has been active in music throughout her career, and her twelfth album, Snapshots, which is a collection of cover songs, was released in 2011 (not released in the U.S. though you can buy on import or MP3-only through Amazon).

As far as the concert itself, Kim Wilde was really amazing, and it was an unforgettable experience for me, as I never thought I would have an opportunity to see her perform live.

The musicians who performed with Nik Kershaw returned to the stage for Kim Wilde’s set, including (with a costume change) Nick Beggs on bass guitar, (who is formerly from Kajagoogoo), Neil Jones on guitar, Stevie Power on keyboards, Jonny Atkinson on drums,

Things kicked off with “Never Trust A Stranger”, which was a hit for her in 1988. A pure Kim Wilde song.

The show carried along with that sort of pace for the first third of the show, and then the stage mostly cleared out, leaving just Kim Wilde’s niece, Scarlett, who provided awesome backing vocals throughout the night, as well as her musical partner and brother, Ricky Wilde.

The trio then did an all-acoustic portion of the set.

After covering some Christmas-inspired music, they dropped back into more pop-oriented songs, including her cover of Erasure’s “A Little Respect”.

Two of the more interesting songs of the night was when her dad joined her on stage to do a cover of Fleet Foxes “White Winter Hymnal”, and later when Rick Astley made a surprise guest appearance for a duet with “White Christmas”.

The main set ended with “You Leave Me Hangin’ On”, which is actually my own favorite from her catalog, and after a very Christmas encore, the entire show ended on “Kids in America”.

I really loved the concert, and it was definitely a very special show. 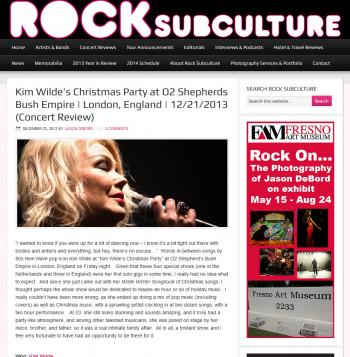