Multi award winning filmmaker Paul D’s latest music video features ‘Kids In America’ singer, Kim Wilde, clad in a skin tight black PVC catsuit, confronting zombies, vampires, werewolves, and demons, as she fights for the man she loves. The video was shot on the Red One MX and Canon C300 on location at a Victorian cemetery and a trendy nightclu in London, England and can be seen at: http://vimeo.com/70409470

‘Every Time I See You I Go Wild‘ (the track featured in the video) was written by Stevie Wonder, recorded by British Electric Foundation (B.E.F) and Produced by Martyn Ware. In addition to being the man behind B.E.F., Ware is also one half of 80s chart toppers ‘Heaven 17’ and an ex founder member of legendary electronic band ‘The Human League’. The total sales for records that Ware has appeared on and produced exceeds fifty million worldwide.

The ‘Every Time I See You I Go Wild’ video was Directed, Produced and Edited by Paul D, for his production company, Paul D TV. A behind the scenes feature can be seen at: http://pauld.tv/13vn1dx Paul is probably best known for the cult ‘Toadlickers’ video he made for 5 times Grammy Award nominated artist Thomas Dolby.

The Post Visual Effects were created by Mike Quinn of QuinnZone Studios, whose film credits include ‘Return of The Jedi’ (in which he played the animatronic co-pilot of the Millenium Falcon, ‘Nien Nunb’), The Muppets, Little Shop of Horrors, Who Framed Roger Rabbit & Labyrinth.

The Costume Designer for the video, Christopher Wilmer, is currently working on Sam Mendes’ London West End theatre production of ‘Charlie and The Chocolate Factory’. 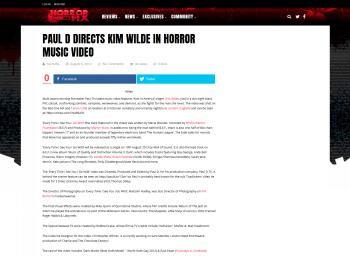