They haven’t graced the Top Ten singles chart since the end of the 1980s but Kim Wilde and Nik Kershaw certainly proved that their songs have stood the test of time at the 02 Academy. Billed as Kim Wilde’s Christmas Party, there was a genuine festive atmosphere in the air with Christmas trees on stage and many of the audience sporting flashing Santa hats, tinsel and antlers.

Bristol-born Nik Kershaw soon got the crowd in the party mood with a short set packed with his own singalong classic 80s hits, including I Won’t Let The Sun Go Down on Me, Wouldn’t it Be Good, The Riddle and Wide Boy. He may now be a silver-haired 55-year-old but his voice sounded as good as ever and he’s also showed that he's a pretty handy guitarist, too.

Although she has appeared on retro 80s package tours in recent years, this was Kim Wilde’s first solo gig since 1986 and the blonde 53-year-old was clearly fired up for what was the first of three pre-Christmas shows to promote her well-received new album, Wilde Winter Songbook.

Backed by a six-piece band that included her brother Ricky on guitar, her niece Scarlet on backing vocals and Nick Beggs of fellow 80s chart-toppers Kajagoogoo on bass, she hardly stopped for breath as she belted out hit after hit from the early part of her 30-year career, including Chequered Love, Cambodia, Water on Glass, View From a Bridge, If I Can’t Have You and a wonderful version of Four Letter Word performed with her brother and niece.

After an hour, she turned to the new album with Hey Mr Snowman, New Life and Hope, three strong new songs which show that Wilde is still a notable songwriter in her own right.

And then it was time to really get the party going as the fake snow descended and Wilde, joined by Kershaw, rolled out a medley of festive favourites including Slade’s Merry Xmas Everybody, Wizzard’s I Wish it Could be Christmas Everyday, as well as a spirited version of Rockin’ Around the Christmas Tree.

A final encore of Kids in America, Wilde’s biggest hit from 1981, brought to an end a high-energy, fun-packed 90-minute performance guaranteed to get even the grumpiest Scrooge well and truly in the Christmas spirit. 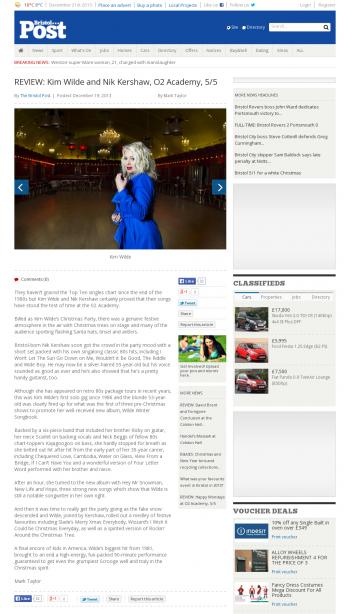