We talk to Kim Wilde about this '80s back-to-back

World-renowned horticulturalist and sometime pop singer Kim Wilde is removing her mucky gloves in preparation for a looming Australian tour. She’ll share the billing with Nik Kershaw, who didn’t just sing that Classic Hits ‘Wouldn’t It Be Good’ song, and that ‘The Riddle’ one, oh and not forgetting ‘Wide Boy’, but has had numerous more modest hits, on his own and writing for other acts, including a number one for Chesney Hawkes. He’s worked with Elton John, Kylie, Tom Jones and numerous others. Despite enjoying writing books on landscape gardening these days, Kim is chuffed about the whole pop tour thing.

“Nik and I have done a lot of work together on ’80s gigs around Europe for a couple of years now and we just gravitated towards each other," she says, "and the tour is one of those things that we’ve engineered a bit.”

Wilde has been gigging full-time with a permanent band for the past ten years, building up a solid live following across Europe. "I had a nice long break and we had the children. My brother is still my musical director, and we keep things fresh, and I’ve made a few albums. It doesn’t feel like putting on a record that sounds a bit scratched. We’ve injected a lot of new life and focus on the tracks.”

Kim’s most recent album, Snapshots is a collection of eclectic and very cleverly chosen covers, from The Buzzcocks to the Cure, Mike Oldfield to Bacharach, Erasure to Suede. It’s very cool, even with an East 17 song on it.

“We tried to choose songs from as many decades as we could. First and foremost songs with great melodies. I sat down with my brother Ricky and we looked at songs we could bring something new to. It’s amazing how many songs you love that don’t suit your voice! Some just didn’t work. I didn’t want to go down any obvious road and didn’t want to pull the wool over anyone’s eyes. It was very self-indulgent in a way, the album, but I was encouraged by the record company to do just that. They gave us a free hand.

“I was very proud of the record. It’s an homage to my passion for pop music, which hasn’t really diminished at all. I’ve still got a good ear for a great melody and a great artist. There’s a lot of stuff being played in the house now by our teenagers who are 13 and 15. It’s a real melting pot of musical styles here. My husband listens to a lot of theatre music and classical music and all sorts of things. My son’s constantly got Metallica on, or Green Day.”

Wilde great up in a very musical family herself – her father Marty was a teen heartthrob who had a string of hits in the late-'50s and '60s before moving into producing, and writing songs for others, including his daughter. Was she destined to join in?

“I do have a sense of destiny about my career," she agrees. "I always felt it was waiting for me. I didn’t know when it would happen but I always had a strong feeling it would. I actually didn’t think it would be a home-grown beginning. I went to art college and thought perhaps I’d get spotted in a club or in a band in Camden or something, which did actually happen right at the start of my career but that’s another story … so yeah, destiny but not just because of my dad.”

And she adds, “Some people don’t believe in that, destiny, they think it’s a load of bollocks but I think it’s a very real concept.”

So she's off and running with ‘Kids In America’, and then ‘Chequered Love’, then ’Cambodia’ and suddenly she's a huge star. How did she deal with that?

“I grew up with one of this country’s first pop stars and had him to look to see how pop stars behave and he was just a regular guy. His approach to fame was that it was something you look after, you put it back in a box you bring it out when you need to use it, you use it with care and imagination, so that was how I grew up.

“He played golf," she continues of her father. "No flash cars or flash holidays. I think we went to Cornwall once and Spain once. There wasn’t a swimming pool in the back garden. Everything was normal – I went to the village school, so my perception of fame was from one of the most famous men in England, and his focus was very much on family, and that’s one of the greatest gifts that he’s given me.”

Now that Wilde Jr has her own family, she's happy enough for the pop star lineage to contine. “It's a great industry," she insists. "It’s a huge earner for our economy and I think people have a realistic chance of having a good life one way or another. It’s not an unreasonable quest. It may have seemed so in the '50s, which makes pioneers like my dad seem all the more remarkable, but there are music colleges left right and centre, and rock’n’roll courses – unimaginable opportunities for young people. There are so many great songwriters emerging, particularly women songwriters. It was always a male-dominated world, especially with songwriting, not so much performing, and that’s changed dramatically. My 14-year-old daughter sits at the piano writing songs and it’s perfectly natural. There’s a sea change and it’s very exciting and good news all round and god bless the internet!”

Fortunately for us fans, Wilde's not considering maturing into a jazz chanteuse while the youngsters pursue pop. "I’m not in any hurry to slow down," she says. "I want to jump and down for as long as I can, and run around and strike poses. I’ll do the grown up stuff when I become a grown up.” 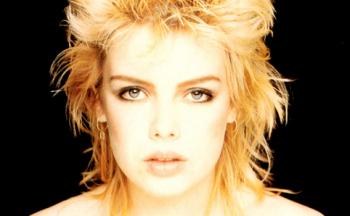