What I know about men

My dad [singer Marty Wilde] is a physically imposing man; he's six-foot-four with great big hands. Everything about him is larger than life and his personality matches. It's like he observes life through a funny pair of glasses. He still has me absolutely cracking up over some observation or mad comment he makes.

I really looked up to him as a child. Although he was away a lot performing I always felt very secure in his love. He brought us to Australia when I was 13 and I used to just stand at the side of the stage watching him captivate his audience.

I was very protective of Ricky; he was just nine months younger, so we grew up buddies. He's a musician, and coming to Australia with me for the tour. There were lots of kids down our lane, Ricky's friends and mine, so we all hung out together. I was particularly attracted to any of the boys who had a good sense of humour; that has been a theme that's run throughout the rest of my life.

I had my first kiss when I was about 13 with a boy at the local disco; it was pursed lips and nothing more. I remember my friend, who was 12 and a bit of a goer, launching in with her boyfriend. And I just sat there with pursed lips with this boy called David; I thought the sun shone out of every orifice of his body. He was from the next village and he had a really sunny smile. He was in touch with me about 15 years ago and I met up with him again – it was lovely. He's had a really exciting life – he spent a lot of time in the Amazon. I think he's a farmer in Ireland now.

I was 20 when I got into the music business and my debut single [Kids in America] came out the next year. I was working with a lot of men in my band. I got used to men being quite laddish and after girls all the time; they were pretty immature. I just put my head down and got on with my career.

I know what it's like to have a broken heart. Luckily not too much, but enough to know what it feels like for somebody else. I wrote a song called You'll Be the One Who'll Lose [on her Close album] about a relationship that went nowhere with somebody that I cared about very much at the time. That song perfectly describes that situation. For me, songwriting has been a great therapy and a great way of working out the heartache of life.

I met my husband, [singer and actor] Hal Fowler, in 1996 when Pete Townshend from the Who offered me the part of Mrs Walker in the musical Tommy in the West End. Hal was playing Cousin Kevin. Hal makes me laugh a hell of a lot and that was one of the reasons our relationship began.

Within six months we got married. We fell in love pretty quickly and it hasn't really changed – we just celebrated our 17th wedding anniversary. It hasn't all been like a teddy bears' picnic. It's had its trials and tribulations, but we've got through them because we do love each other very much.

My detour into the world of gardening [Wilde has published two gardening books and won a gold medal at the Chelsea Flower Show in 2005] means I worked with a lot of guys in horticulture. There were many similarities with the musicians I knew, all people who were passionate about something.

My son, Harry, is 15 now and as far as I'm concerned he's the best boy in the world. He plays incredible electric guitar. He's just going through the beginning stages of changing from a boy to a man. He's a sweet, quiet soul. He grunts a lot and doesn't say much, but one or two words can mean an awful lot from Harry.

Nik Kershaw [who shares top billing on Wilde's Australian tour, starting Wednesday] was always a reluctant pop star. He hated all the focus on image. He was comfortable when he had a guitar in his hand and was singing and songwriting, which he is still doing brilliantly. Back then he was an incredibly shy man and he still keeps his cards close to his chest. He's good company, though, and good friends with my brother Ricky. We're looking forward to a mini holiday together in Australia.

My husband Hal really cracked me up this morning; he was teasing our 13-year-old daughter, Rose. I can't repeat some of the things he says because he is often very, very rude, but he still makes me laugh, and as long as he does I guess we'll be all right. 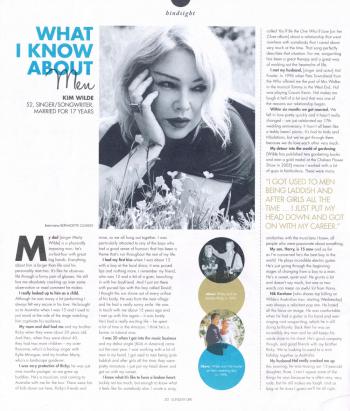