Today's teenagers are poor pigs: well-behaved and in herds they scream their lungs out with Rihanna, Lady Gaga, Miley Cyrus & co., want to be like stars who are scandalous when they keep their clothes on for once, and think these people have sex appeal. They have no idea!

Us, the older people (meaning, those who grew up without mobile phones), we had Kim Wilde! A monstrous invention of erotica, who didn't need to dress up in a way that would have women be stoned to death in Iraq. And she could sing too! The best thing: we still have Kim... in all of her Wild(e)ness...

She has seen 52 winters come and go, but, dear friends, Kim has matured, not aged. She has the look of the current lady but still resembles a lot like 1988 when we were still young, yearning for her in the Ernst Happel Stadium. Okay, she was not the headliner, but supporting Michael Jackson, but we only had eyes for her.

King of Pop, who should that be? Nostalgia overcomes us. Get ready for a story that could be painful.
So we're in the stadium, 25 years ago. Kim on stage, in a tight, white suit. During a warm, sunny day in the Austrian metropole. What follows was  a convergence of "powers". Sunbeams, from a good angle. On white clothing. With dark tights underneath... you understand? And just on that moment Kim sang "You came" into the microphone. A phrase we misunderstood, misguided by our hormones. You can understand what happened... but let's not say too much about this.

So the last fundaments of our credibility are gone. We'd like to move on.
Kim, please come...
Damn, again the ambiguity.

We have the new version of her 1988 hit-album "Close" - with a lot of special additions. The re-release of the exact album that made her tour around Europe with Michael Jackson. It was an unforgettable experience, wasn't it?
You can be sure. We played 34 shows in sold out stadiums, which means that I performed in front of millions of people. One has to do it as a young girl, too! (laughs)
At first I doubted whether I could actually do it. Of course he played in his own league, was unapproachable - but I became more self assured with every gig. I learned a lot about myself, the tour changed my life. And that's the truth.

The Eighties are going through a big revival these days. Why is that? Pure nostalgia, or was the music really better during that time?
I wouldn't like to think so. Although mine was great of course (laughs). But I think the rise of the eighties is primarily because it still influence modern day artists like the Killers. It's also worth nothing that the concerts attract the teenagers from that time, but also the teenagers of now. And the kids know the lyrics, sometimes they know them better than I do! (laughs)
And finally there's also the nostalgia-factor. It returns every decade.

Did you believe that you'd have a career that is now over thirty years in length?
Never! If anyone had said that to me at the time I would have said they were crazy. But of course it's a great feeling, still being in the business, and still being wanted.
Right now I am working on two albums (one of them being a Christmas album titled 'Wilde Winter Songbook'), play live numerous times every year - and all at 52! It may sound trite, but I really feel good about my life right now. Great husband, great children, a great career - what more could I want?

Now to the theme that is so close to Penthouse's heart: her sex appeal. Did it get to her, to be narrowed down to her admittedly great looks?
No, not at all. I've always enjoyed it and I will keep on doing so - if anyone would think of talking about sex appeal for someone who is over 50! (laughs). Of course sometimes it happened and it still happens that the remark "You are a sexy woman" gets to my nerves, but I bundle it up in a box in my brain and get it out later when I come down again. Believe me, I am good at that! (laughs)

So the Eighties were good to you, but the Nineties were best left forgotten. Were you disillusioned when things went downhill so suddenly?
No, not really. I focused on my role as a mother, built a new career in horticulture, and left the music industry behind. Of course I was down from time time when nothing I released was successful, but I always thought that if it would work again, it would work really well. And I was right in the end! (laughs)

To finish: what's it like to live as Kim Wilde? When you leave the house, do you have to get rid of paparazzi and fans, or do you do your shopping in peace and quiet?
The latter, thank God. I don't know if I could cope, living like a popstar in an ivory tower, isolated from the outside world, being surrounded by people every time I leave the house. My shopping is just as interesting as your neighbour's shopping. Kim Wilde near the till doesn't interest anyone over here.. (laughs) 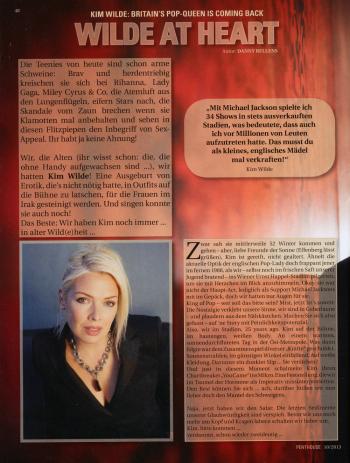 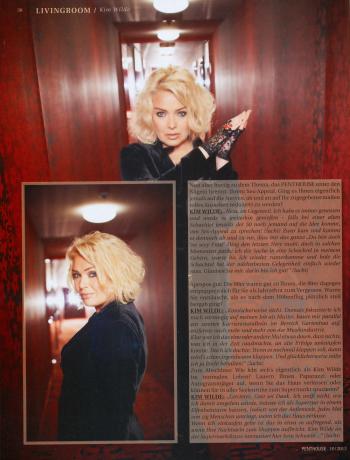 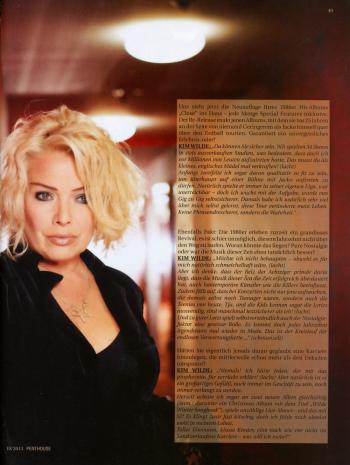