When Kim Wilde burst onto the international pop scene with her first single Kids In America, she immediately hit the jackpot. The song reached number 2 on the UK charts and became a major hit all over the world in 1981. At the start of that new decade, she certainly knew how to impress the record-buying youth (of which I was one) with her fresh sound and attractive looks. Many awards followed (including a Brit Award as Best British Female Solo Artist in 1983) and numerous hits, such as Chequered Love, You Keep Me Hangin’ On (also a major US hit) and You Came.

While never completely leaving the charts in the ‘90s, she had a major comeback in 2003 with the song Anyplace, Anywhere, Anytime, a collaboration with German pop star Nena. To date, Kim has sold over 10 million albums and 20 million singles and, while still active in music, has pursued an alternative career as a landscape gardener, appearing on several British television gardening programmes, as well as publishing books on the subject.

As far as ABBA is concerned, Kim has expressed her admiration for the band several times, including on her Twitter account. In fact, the melody of Lay All Your Love On Me was used in a DJ remix by J.R. Clements in 1990 of Kim’s Can’t Get Enough (Of Your Love. This version was released by Hot Tracks, a DJ remix service. After the following interview, it became clearer than ever to me: Kim Wilde is an ABBA fan par excellence.

Looking back, can you understand why your singles, starting with Kids In America, had such an impact on the record-buying public?
My brother Ricky and my father Marty’s songwriting and production were greatly influenced by the likes of ABBA, combined with a strong hook, melody and lyrics that captured the imagination. We also benefitted from perfect timing and a little bit of luck.

In general, what turns a song into a big hit?
As mentioned, it always needs a strong hook, a memorable melody, stand-out lyrics…. and a large dose of magic!

How important was your image when you first started out?
Image has always been massively important but with the advent of MTV in the ‘80s, I quickly realised it was a game I could play well [smiles], though it always was, and still is, secondary to the music, in my opinion.

A lot has been said about ABBA’s image. What is your opinion?
ABBA’s image was original and contemporary for the time. It was cutting edge, although it’s hard to appreciate that now. They were true original musicians, very much on their own planet with their own style and sound, which is why everyone sat up, watched and listened.

Several of your songs have been covered by other artists. Are there cover versions out there you like in particular?
Yes, Lawnmower Deth did a thrash metal cover version of Kids In America back in 1990. It’s the only cover version that captured anywhere near the same energy and fun as the original.

When recording a new album, can you tell which songs are the potential hits? How have you decided which to release as a single?
There is usually a consensus, but not always. I’d recommend trusting your instincts whilst being open to other people’s opinions. Nothing is set in stone. It’s important to keep your ear to the ground and follow momentum.

How would you describe your work method in the studio, forming a team with your brother and father?
Most of the time my brother Ricky would begin the writing process on either a guitar or one of his various keyboards, including the Wasp [small synthesizer capable of funky analogue sounds; it is black and yellow like the insect it is named after], before my father Marty would begin to work on the lyrics. Invariably, the melody would come before the lyrics. This changed over the years with myself and Marty getting more involved in lyric writing and melodies.

Would you agree that a great part of your success was also due to the unique sound that combined pop, rock and new wave as well as your sparkling vocals?
All of the above, plus expert guidance by Mickie Most at RAK Records [the English record producer Mickie Most discovered Kim while she was doing backing vocals for her father].

What do you think of the production of the ABBA records?
The recording and arrangement of the vocals alone were incredible for the time. They were comparable to the intricate production of The Beach Boys’ Pet Sounds album.

In your opinion, what is the secret of ABBA’s continuing success?
They crafted perfect pop songs which were embedded within timeless productions.

How do you appreciate ABBA’s music?
As a performer, the dynamic melodies are a joy to sing and happily in my vocal range [smiles].

Have you ever considered recording an ABBA song?
No, but I have performed live versions of The Name Of The Game with an ABBA tribute band called FABBA. I also wrote a song for Agnetha Fältskog with some Swedish songwriters whilst in Stockholm and after I visited the ABBA museum. It’s still hidden in a computer somewhere…

How much do you like the voices of Agnetha and Frida? In your opinion, how important was their contribution to the success of ABBA?
I often hear their voices when I’m singing in the studio, inspiring me in sometimes very subtle ways. It could just be a word or a whole line of a song, and somehow they are there. Two voices working like that together so magically is rare, as subsequent years have shown. You could argue that no two female voices have had such an impact on pop music since.

Which are your favourite ABBA songs and why?
The Name Of The Game, The Winner Takes It All and Knowing Me, Knowing You. I like all of these songs because they have a wistful sadness and a feeling of longing about them. Everyone has a story in their own lives which they can relate to in these songs, and they speak directly to the hearts of everyone, which is one of the reasons why they were so phenomenally successful. 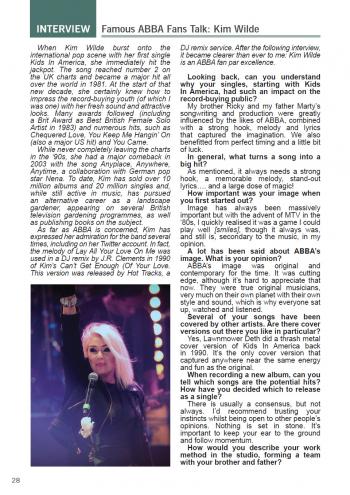 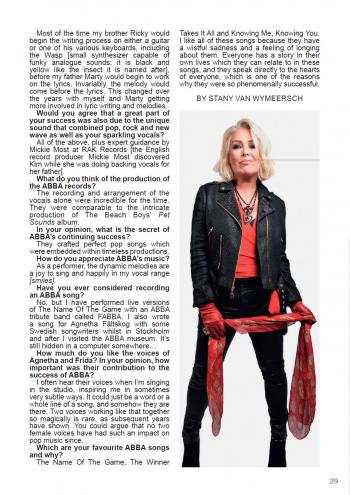