Kim Wilde didn’t know if she had enough fight in her to launch another assault on the British charts after so many years away. But an out-of-this-world experience with a UFO in her back garden reinvigorated the singer and prompted one of the best albums of her career.

Kim shot to international fame with Kids In America in 1981 but hadn’t released an album of original material in her home country since 1992. Her recording career continued in Europe, but back home she became better known for gardening. But desperate for some new hits to sing alongside old gems like Chequered Love, Kim and her songwriting partner and brother, Ricky, used her extraterrestrial encounter to inspire critically-acclaimed new album, Here Come The Aliens, which she is now touring.

Kim said: “Apart from my Christmas album, I haven’t wanted to release a record in the UK for a long time. I wasn’t sure if people were ready for Gardening Kim to come out with pop records again. It takes a lot of energy and focus to release an album, especially in the UK because the world watches what happens here. I didn’t know if I was still relevant. I’ve loved doing the ’80s shows but I wasn’t sure if I was still up for the fight, so I suppose it’s been a wonderful surprise that there’s still so much enthusiasm inside me and Rick.”

That brings us to the inspiration for her new album, which delivers her trademark anthemic pop rock sound.

“It was 2009 and I’d spent the evening in A&E with my son, Harry, who we thought had swine flu,” continued the mum of two. “I came home exhausted and was in the back garden with my friend and husband when we saw an incredible light in the sky. It came through the clouds and started moving around in a really crazy way, darting around about 10 times. There is nothing I know of that could do something as extraordinary as that and I really felt I was in the presence of something extra-terrestrial. It inspired me and gave me an incredible burst of energy.”

It was during her first pregnancy 20 years ago that Kim’s love of gardening came to the fore. She went to college to learn about horticulture and presented TV shows and wrote books on the subject, and it remains a big part of her and husband Hal Fowler’s life. She is a patron of the Waste Not Want Not community project.

“We grow and sell plants. It’s a safe place for people who might otherwise feel excluded to get involved,” explained Kim. “It’s testament to the healing and therapeutic ways of gardening. It works as therapy for me and has helped in lots of stressful situations. Moving out of the music industry after getting married and having kids, I wondered what I was going to do and gardening was there.”

Yet Kim never had any intention of becoming a pop star. As the eldest daughter of ’50s star Marty Wilde and Joyce Baker, also a singer, Kim instead dreamed of being a session performer. But after a record executive heard her on a demo her brother was working on, he spotted her star potential. Ricky and his dad wrote Kids In America for Kim and it became a huge hit. Kim toured the world with icons like Michael Jackson and David Bowie and sold millions of albums.

“I took to fame like a duck to water,” she smiled. “I was 20 and loved every part of it – the recording studios, travelling the world, making videos. I did 30 shows with Michael. I watched him from the side and it was inspiring. I had my picture taken with him but he seemed such an isolated guy, but then that can happen on tour. It takes a lot of energy to focus on doing big gigs. I did around 20 shows with David Bowie and he would pop his head in the dressing room door and wish me luck. I’ve toured around the world, but there’s nothing like touring your own country. I’m really looking forward to it and saying thank you to the people who have grown up with me.” 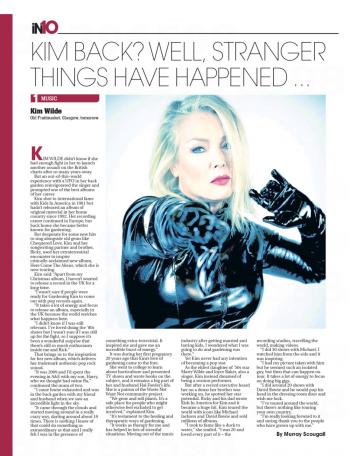